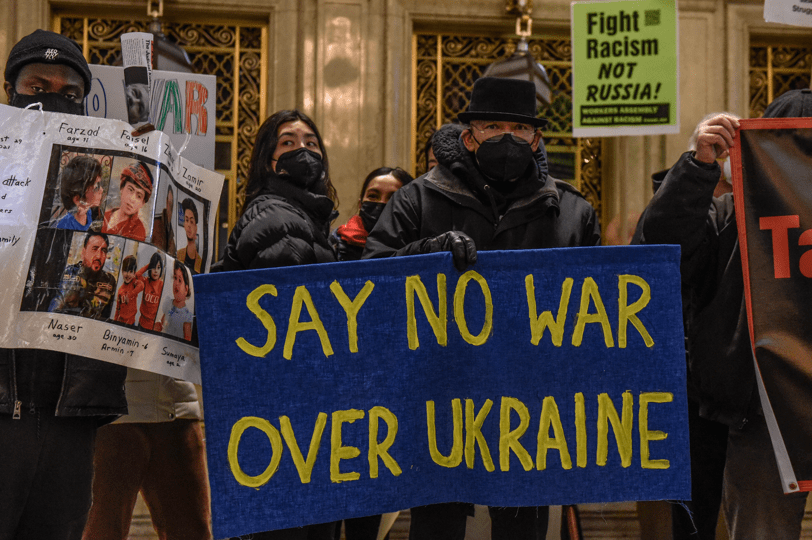 While Joe Biden is certain conflict is looming, these New York protesters accused the president of promoting a distraction from US domestic woes. Photo: Getty

Scott Morrison has warned Russia the world will be moving together to counteract any violence it inflicts on Ukraine.

Washington believes Russian troops massed near Ukraine’s border are advancing and are “poised to strike”.

“It is unacceptable because it is unwarranted, it’s unprovoked in terms of the threats of terrible violence that Russia is imposing on Ukraine,” the Prime Minister told reporters in Melbourne on Sunday.

He said while there has never been any contemplation of Australian troops being deployed to Eastern Europe, the government has been working with its allies to directly support Ukraine, whether it be in cyberspace or things of that nature.

“The world will be moving together to seek to counteract what would be a terrible act of violence,” Mr Morrison said.

“Should they follow through on their acts of violence against Ukraine, we will follow through with sanctions together and in partnership with all of our other allies and partners.”

He said Foreign Minister Marise Payne will be meeting with her Ukrainian counterpart on Monday.

Hoping for a miracle

Defence Minister Peter Dutton said while he is hoping for an “11th hour miracle”, it was very hard to see how that would be the case and expects there will be an incursion into the Ukraine.

He said the alliance now between China and Russia is deeply concerning.

“Russia needs to understand, as does China, there is a price to pay for those acts of aggression,” he said.

Labor frontbencher Michelle Rowland said it was a deeply concerning situation and was clearly Russian foreign policy being driven by the personality of President Putin in what he sees as a position of strength.

“In the meantime, one just prays for the people of Ukraine who are going to be collateral damage of this,” she told Sky News.

“This is deeply concerning for human beings and for the Ukrainian-Australian community right here now.”

Scott Morrison: Russia’s aggression against Ukraine is uniting the world