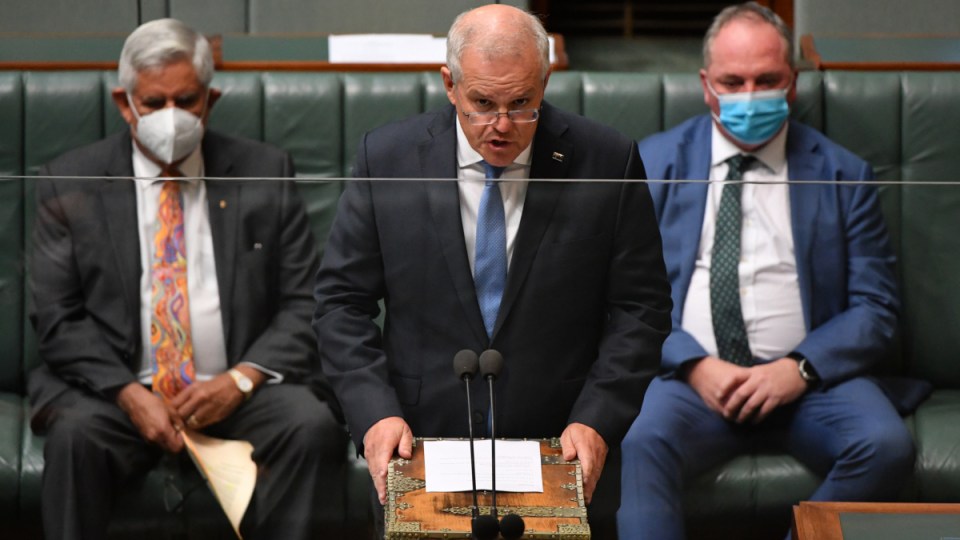 Scott Morrison delivers a speech marking the anniversary of the apology to the stolen generation. Photo: AAP

Prime Minister Scott Morrison is at the centre of a storm over a handful of words uttered as federal parliament marked the anniversary of the national apology to Australia’s stolen generations.

In 2008, the formal apology was given to ​Aboriginal and Torres Strait Islander people, particularly to the stolen generations, who had been impacted by past government policies of forced child removal and assimilation.

Mr Morrison said each anniversary was an opportunity for Australia to remind itself of times past and lessons learned.

He said progress was being made in closing the gap between Indigenous and non-Indigenous Australians and the government was taking action to right past wrongs.

“Out of great tragedy and loss there can be hope,” he said.

But it was what he said next that has sparked opposition.

“Sorry is not the hardest word to say – the hardest is ‘I forgive you’. Forgiveness does not mean forgetting, nor does it mean there does not need to be action,” Mr Morrison said.

Indigenous senator Lidia Thorpe was furious. She said Mr Morrison’s statement was “not an apology”.

“This is outright disrespectful to all those affected by stolen generations in this country,” she said.

“How dare you ask forgiveness when you still perpetrate racist policies and systems that continue to steal our babies.”

Later on Monday, the First People’s Assembly of Victoria tweeted what it said was its “polite” response to the Prime Minister.

Elsewhere, Mr Albanese reaffirmed Labor’s commitment to implement all recommendations from the Uluru Statement of the Heart.

This includes a constitutionally enshrined Indigenous voice to parliament which Labor would hold a referendum for if elected.

The Coalition proposes to legislate a voice to government instead.

“Speeches which do not lead to action are a hollow, bitter undertaking,” Mr Albanese said.

“But now we should feel within our own hearts the insistent rhythm of Uluru’s three generous requests: Voice, truth, treaty. Labor is committed to all three.”

Through the scheme, survivors of the stolen generations will have access to free legal advice and counselling, as well as other financial and wellbeing support.

“We should never leave it unstated just how long the reconciliation journey has been in our country,” she said.