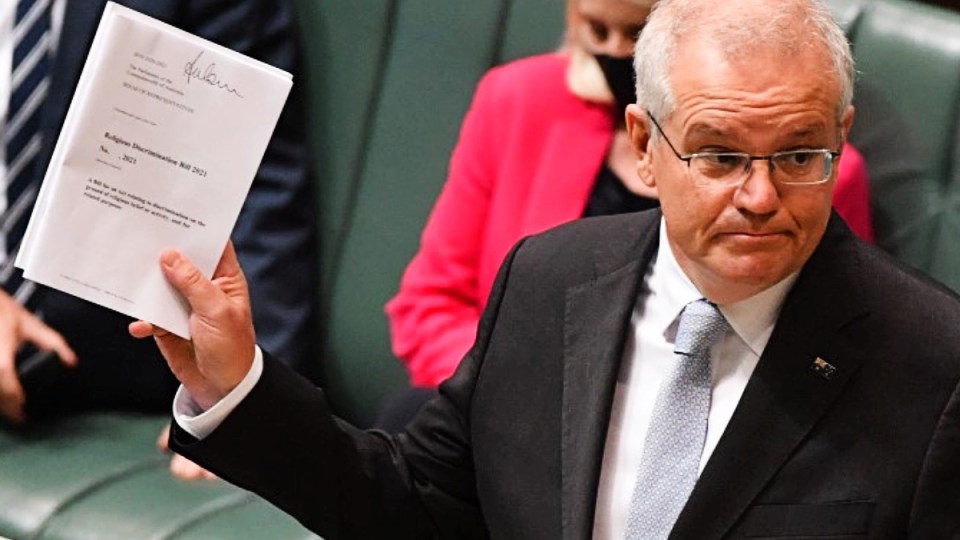 The Coalition's religious discrimination bill revolt showed the PM does not control his party. Photo: Getty

It’s a bad sign when a government starts eating its own.

The backbench Liberal revolt that pushed a protection for transgender kids through the House of Representatives, and thereby inadvertently doomed Scott Morrison’s religious discrimination legislation, has bitten deeply with the PM and senior ministers.

It showed they’d lost control of their troops. Humiliatingly, it revealed they hadn’t known what was coming.

Figuratively speaking, they were caught undressed on the floor of the parliament in the middle of the night.

During the debate on the religious discrimination package, Trent Zimmerman, Bridget Archer, Katie Allen, Dave Sharma and Fiona Martin crossed the floor on an amendment to the sex discrimination act that would protect all children at religious schools.

This was in contrast to the government’s much narrower proposal to protect gay students from expulsion from these schools, but not cover transgender students.

Normally, senior ministers would just apply a big dollop of spin to the situation in explaining away the government’s loss. They’d say it was unfortunate while hawking the line that Liberal MPs, unlike Labor counterparts, can exercise their consciences and cross the floor when they feel strongly about something.

But publicly and privately, ministers are in high dudgeon with the now-famous (or infamous, in their eyes) five, claiming treachery and betrayal. They allege people went back on their word, deals were broken, the PM was ambushed.

Defence Minister Peter Dutton holds the position of “leader of the house.” He has a lot of skin in the game when it comes to ensuring the government doesn’t lose votes.

Dutton told the ABC on Friday that Morrison had been “misled”.

Dutton didn’t provide details or specify individuals, but did say, “the government doesn’t go into a vote like that unless there’s been assurances given.

“We had very clear statements from a number of people, including beyond the five. … The Prime Minister based his judgement, his actions, his decisions on a perfectly reasonable basis following discussion, and it’s difficult when you get to the floor of parliament and those undertakings aren’t honoured.”

Dutton added the obvious – in a parliament where the government only has a majority of one, individuals are empowered on issues they believe important to them. (He did not reference periodic threats – which, admittedly, often haven’t come to much – by Nationals MP George Christensen.)

To the five, the issue of transgender children was important, for reasons of principle, politics and in a couple of cases professional background (Allen is a former paediatrician, Martin a psychologist).

Ministers argue that undertakings were broken. But if that were the case – and we can’t know without more information – it was a two-way street.

In his own words

Morrison had undertaken that trans kids would be offered protection. This was documented in a letter to Anthony Albanese which the opposition leader tabled in the debate.

“In keeping with my Second Reading Speech, where I stated there is no place in our education system for any form of discrimination against a student on the basis of their sexuality or gender identity, the Government will move an amendment to remove the provision of the Sex Discrimination Act which was included in 2013 which limited the protections provided under this act.”

The same day, Allen posted on Facebook: “Proud that the Sex Discrimination Act will be modified to protect LGBTIQA+ kids in schools. This will help the lives of so many children – it’s a real win for tolerance and diversity. Thank you Angie Bell MP, Dave Sharma MP and Fiona Martin MP for your strength in advocacy.”

It was clear a comprehensive amendment was then expected by those Liberals involved with the issue. But by this week, the PM had narrowed what he was willing to do.

Whatever the ins and outs of the haggling, we do know that some of the five had given notice they would or could break ranks.

Archer went public opposing the religious discrimination package. Zimmerman told the Coalition party room he reserved his position (that is the formal way MPs declare to colleagues they may vote against something). Sharma had expressed concerns in media interviews.

While Dutton has been out with the stockwhip publicly, it’s understood the Prime Minister’s office has been expressing its displeasure behind the scenes. Its approach is said to be heavy handed.

As he put his religious discrimination legislation in the freezer, Morrison was hit by yet another leak.

A story in The Australian claimed he had been overridden in cabinet when he proposed, as a way of trying to secure votes for the religious discrimination legislation, that the government “put a national integrity commission bill on the notice paper for debate”.

Ministers dispute the story, insisting the matter was canvassed in a much more low key manner as part of a general strategy discussion. But from Morrison’s point of view, most disturbing would be the leak itself and the way it had been cast to discredit him.

At what is both the fag end and the business end of the term, Morrison is living in an unnerving world where he doesn’t know what might turn up next.

Michelle Grattan is a Professorial Fellow at the University of Canberra