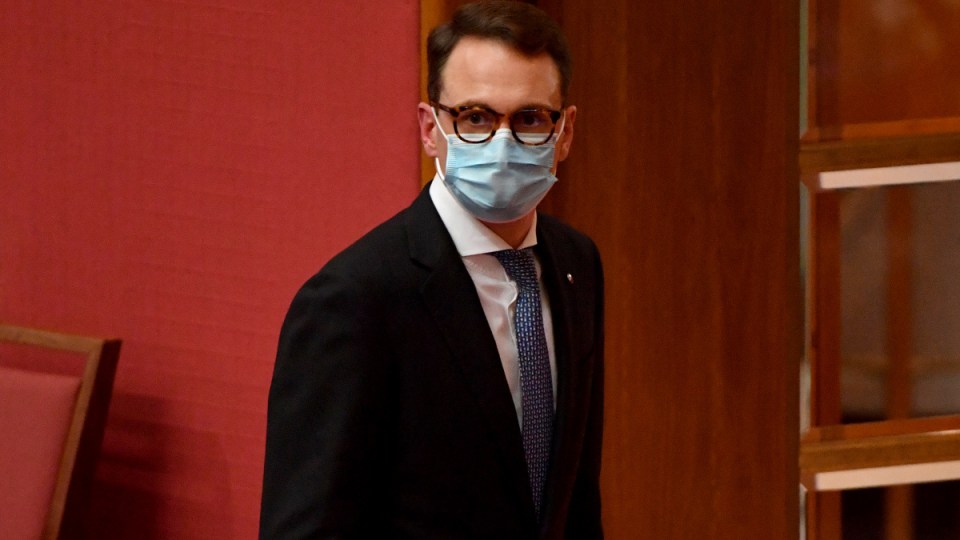 The bill has "a lot of good measures" but minority groups need to be protected, Andrew Bragg says. Photo: AAP

Moderate Liberals were not shown legal advice the attorney-general is using to justify saying amendments to the Sex Discrimination Act would increase discrimination against students.

Attorney-General Michaelia Cash then cited legal advice saying the non-government amendments that passed the lower house undermined existing protections and broadened the grounds on which religious schools could discriminate.

But Liberal senator Andrew Bragg, who intended to cross the floor in the Senate if the government tried to repeal the amendment, confirmed he hadn’t seen the legal advice in detail.

“I haven’t seen that advice in detail. It’s been a busy week, I’ll have a look at the advice,” he said on Friday.

“There are a lot of good measures in the bill but as we put in place that particular law, we need to make sure we protect all minority groups in doing so.”

Another moderate Liberal also confirmed they had not seen the advice before voting on the amendments.

Independent MP Rebekha Sharkie – who moved the amendment – received a letter from the attorney-general only after the fact and said it didn’t include the legal advice underpinning the letter.

“I have deep concerns over the cited but unseen legal advice and have a sense of deja vu after the government previously misrepresented legal advice on the medevac transfer bill,” she wrote on Twitter.

“If the government was genuinely worried over the so-called unintended consequences, it could draft its own amendments in the Senate to address said issues.”

Shadow attorney-general Mark Dreyfus – who was copied into the letter – said it was a desperate attempt by Prime Minister Scott Morrison to cover up a “humiliating defeat on the floor of the House”.

This is despite Mr Morrison writing to Opposition Leader Anthony Albanese on December 1 expressing his intention to “move an amendment to remove the provision of the Sex Discrimination Act” to protect students from discrimination on the basis of sexuality and gender identity.

It was the same day moderate Liberals secured the government’s commitment to change the Sex Discrimination Act to protect LGBTQI+ students.

Katie Allen announced the deal in a Facebook post, which read: “Proud that the Sex Discrimination Act will be modified to protect LGBTIQA+ kids in schools”.

“This will help the lives of so many children – it’s a real win for tolerance and diversity.”

Mr Dutton claimed the MPs who crossed the floor had blindsided the government about their intention to support the legislation.

“[Mr Morrison] was, frankly, misled … but there are undertakings that were given, the undertaking wasn’t honoured,” Mr Dutton told ABC radio on Friday.

“The government doesn’t go into a vote like that unless assurances have been given.”

It is now unlikely the laws will be debated in the upper house before the next election. It is due to be held by May, with just two sitting days left for the Senate.

The teal wave: Meet the pro-climate women who took on the Liberal Party and won
Peter Dutton defends claim that China has chosen Anthony Albanese as its preferred PM
Today's Stories