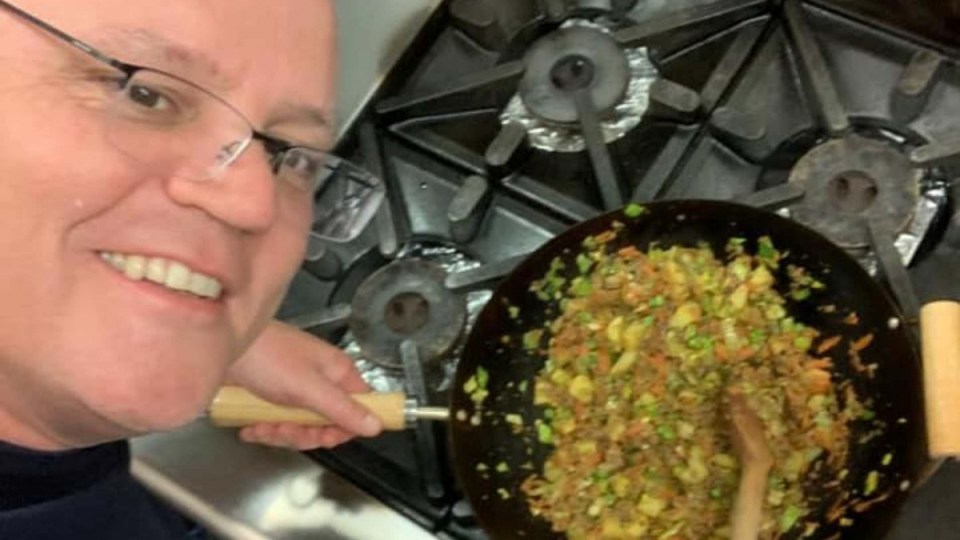 During an election campaign debate between Kevin Rudd and Tony Abbott in 2013, the ever-talkative incumbent prime minister delivered a programmatically specific analysis of the Liberal leader’s policies, particularly the funding of universal parental leave.

“Does this guy ever shut up?” asked Tony Abbott.

After reviewing the word tsunami from Scott Morrison over the last five days, this question lives on.

The big event was what felt like a neverending performance at the National Press Club – a 5000-plus word, 40-minute “let me tell you how lucky you are to have me” riff on a record even Morrison admits is patchy.

The answer is simple and, given the prospect of 14 to 16 more weeks like the last one, not one for those of little patience. Morrison is not going to shut up and he’s not going to give up.

Morrison’s address to the Press Club and his equally wordy run of answers to questions, followed patterns and themes illustrating where the Prime Minister’s mind is in this election year.

Two critical things stood out. Morrison doesn’t believe he is getting the credit he thinks he deserves for the last two years during this pandemic-driven change and uncertainty.

You can almost hear him stamping the little feet in his head, with a bewildered and anguished cry: ‘Don’t you realise what I’ve done for you?’

Those 5000 words in his formal press club speech were dripping with thinly veiled boasts of achievement, plaintively constructed international comparisons and a plea for acknowledgement and acclaim. In his head, he’s left with the question, “Why am I 12 points behind when I’ve done all this?”

Apart from the already telegraphed and meagre cash handout for aged care workers (and even that was less than it appeared), this speech was almost wholly defensive.

A laundry list of what Morrison and his ministers had done was coupled with lachrymose pitches for pity about how weighty things were when “what more can I do?” thoughts apparently intruded on the Prime Minister’s sleep. Therefore, it was jarring to hear Morrison try to frame the election as a “choice” about the future and not a “referendum” on the last two years.

Morrison was direct in saying the election was only a choice. This election isn’t “a referendum on the government”, he said.

Of course, not every election is a choice. They are either a choice or a referendum. Incumbent governments almost always want voters to make a choice, hoping they will fall back on the comfortable escape hatch marked “don’t change horses in midstream”.

Oppositions want to have a referendum. They want to corral all of those disgruntled, disappointed and disaffected voters and have them unite against those in power.

It’s ‘Year One, Term One, Political Science’ and Morrison, the former state director of the Liberal Party, knows this. He understands if the coming election is just a referendum he could lose – not that he thinks he deserves to, as a review of the 5000-word defence of his record shows.

However, if people only look back at the bad times – from the heart-breaking death and neglect in aged care through economic disruption for small business and whole sectors like hospitality and the arts to the never-seem-to-learn mistakes on vaccines and testing – they could well see Morrison fail at the ballot box.

Beyond these bits of lived experience there are the character issues Morrison finds it hard to get away from. The attitude to the treatment of women tops the list, but there’s also a seemingly brutal disregard for anything outside a prism of personal, political self-interest.

It’s no wonder the text message leak during what’s been a week of very rough terrain was so infuriating for Morrison and couldn’t be shrugged off easily.

Morrison’s problem is what’s at the heart of this text between one of his ministers and former New South Wales premier Gladys Berejiklian. The picture painted is of a prime minister described by one of his political intimates as “a psychopath” who cares about politics above all else.

Morrison won the 2019 election because he was able to make it a choice between himself – an unknown quantity who looked like he’d brought stability to a fractious and riven Liberal Party at the top of a clown car government – and an unliked Bill Shorten, who appeared to have a scary policy for every day of the week.

Now, three years on, people have filled in their own view of Morrison. Some of it is favourable: he has had success in portraying himself as the daggy, curry-making dad from the ‘burbs. But in other quarters people think less of him than they did three years ago.

They think he tells lies and is not the sort of person you’d count on. The “who would you have a beer with” test is without doubt the shallowest in the political campaigning toolkit, but it’s a good bet Morrison would fail.

Anthony Albanese might be unexciting and unconvincing as to whether he has many answers but people are not frightened of him – yet.

Morrison and his inner circle of loyalists are whirling like dervishes in a bid to construct a choice, their frustration easy to see as their efforts so far have failed to connect.

They’ll keep trying because it’s the only way out of town. Unless they can regain the public’s attention with a positive message about the future, the ‘referendum crowd’ might swell to an overwhelming and daunting mass.