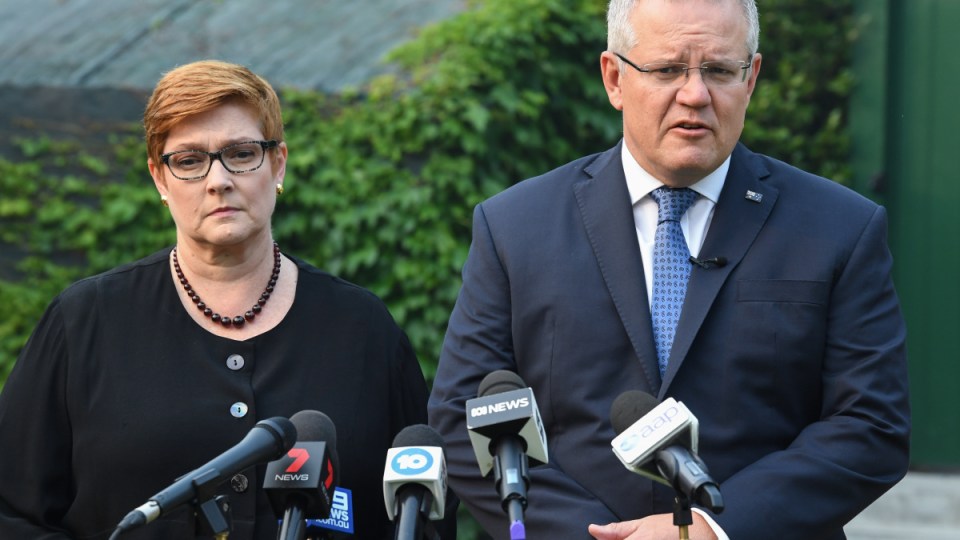 Foreign Minister Marise Payne, pictured with Scott Morrison. She has denied any involvement in the texts leaked this week. Photo: Getty

Foreign Minister Marise Payne has denied she is the cabinet minister who called Prime Minister Scott Morrison a “psycho” and a “fraud”, as speculation mounts about the identity of the frontbencher alleged to have made the comments.

“I can say categorically that these claims have nothing to do with me,” Senator Payne told The New Daily on Wednesday about the story involving an unnamed federal minister disparaging the Prime Minister in texts with former NSW premier Gladys Berejiklian.

“I have never had such an exchange with the former premier, nor have I ever used such language, and nor did I leak messages, if indeed they are genuine.

“It is ludicrous to suggest otherwise. I would add that I also reject the descriptions of the Prime Minister in the purported messages. They do not match my long experience of working with him. He is the best person to lead this country now and into the future.”

Speculation about the unnamed minister’s identity centred strongly on the Foreign Minister on Wednesday, with her name a “trending” topic on Twitter in the afternoon.

It came after the Deputy Prime Minister, Nationals MP Barnaby Joyce, was reported to have said of the explosive text messages: “3000 people know who this is”.

But Mr Joyce denied intending to suggest that the person involved was a woman, saying his remarks had been misinterpreted.

The unnamed minister is alleged to have made the remarks during a text message conversation with Ms Berejiklian during the Black Summer bushfires.

Ms Berejiklian denies any recollection of the exchange, in which she is alleged to have described Mr Morrison as a “horrible, horrible person”.

Network Ten political editor Peter van Onselen revealed the story – which has not been independently verified – while interviewing Mr Morrison at the National Press Club on Tuesday.

The involvement of Ms Berejiklian heightened perceptions that the shortlist of possible candidates could be cut further by assuming that the person is also from NSW.

The current NSW Premier, Dominic Perrottet, also attacked the story and the credibility of the media for running it after attention initially centred on a member of his own cabinet, Treasurer Matt Kean, on Wednesday.

“This is not news, that is smear, gossip and innuendo,” the Premier said.

Mr Kean also denied he was involved in the exchange, telling morning radio he had been through his “millions” of texts with Ms Berejiklian to confirm it was not true.

MPs and the media also revived interest in the minister’s identity on Wednesday.

Sydney Liberal Jason Falinski said any frontbencher responsible for describing the Prime Minister in such a way should resign; Health Minister Greg Hunt called on van Onselen to reveal his source.

But van Onselen added fuel to the fire by stating the minister involved was not only still part of Mr Morrison’s cabinet but also that they were his source.

“I didn’t get these from a third party,” he said.

That apparently contradicted Mr Morrison’s interpretation of the source’s identity. He said on Wednesday morning he was confident that whoever was alleged to have made the damning assessments was no longer a minister.

“There are too many other important things for me to worry about,” he said.

Mr Morrison had earlier described Ms Berejiklian as a friend and tried to recruit her to run for federal politics.

‘Nothing to do with me’: Payne denies she sent PM ‘psycho’ texts