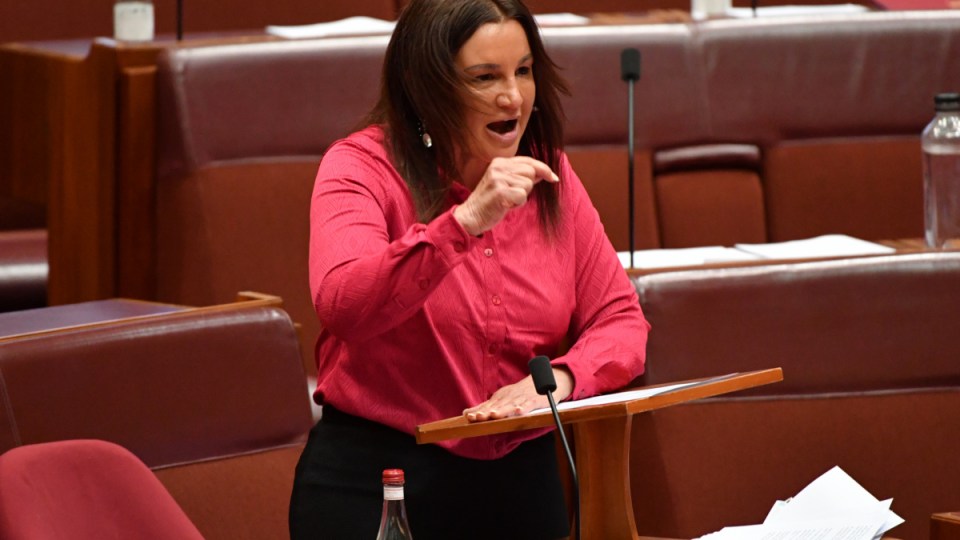 Tasmanian senator Jacqui Lambie has blasted One Nation for “crossing a line” by publishing her personal phone number on social media, revealing she and her staff have copped waves of abuse after her powerful speech backing vaccine mandates.

A visibly rattled Senator Lambie told the Senate on Tuesday she would have to change her number, accusing One Nation senator Malcolm Roberts of sharing a post with her contact details on Facebook.

She also took aim at Prime Minister Scott Morrison, accusing him of stoking “dangerous” division and playing “both sides of the fence” on COVID vaccine mandates.

“It should go without saying it’s completely unacceptable to leak other senators’ personal contact details to the public, just because you don’t like what they’re saying,” Senator Lambie said.

Her office told The New Daily that Senator Roberts had shared a post, containing a screenshot of text message allegedly between Senator Lambie and a constituent, on his official Facebook page. Her phone number was clearly visible on the post.

Senator Roberts’ office told TND that he had taken the post down, but stopped short of apologising to Senator Lambie – as she had requested. A One Nation spokeswoman said Senator Lambie had previously shared her own number on social media, asking constituents to contact her, and argued that therefore “Senator Roberts has in no way ‘leaked’ her number.”

He tweeted that she was “being dishonest”.

The Tasmanian senator said she would have to change her number, citing her fears of future abuse and the potential for further privacy breaches.

“One Nation have crossed a line here that should never be crossed. You’ve got the AFP briefing politicians about our safety, we’ve got gallows on the steps of Victoria’s parliament, and senators in this very chamber should not be facilitating any abuse,” Senator Lambie said.

Senator Lambie had made headlines on Monday with a powerful speech in the Senate on Monday against a One Nation bill to dump vaccine mandates – even for aged-care staff.

She accused Senator Hanson’s party of thriving on discrimination and creating fear to boost its election campaign – and urged Australians to continue to get vaccinated against COVID.

“You have freedom to make a choice, but those choices have consequences,” she said.

“You are choosing to do something that puts other people’s lives at risk and you will be held accountable for that choice.”

Being vaccinated was a patriotic act to get the country out of lockdowns and keep fellow Australians safe, Senator Lambie said.

“It’s called being a goddamn bloody adult! It’s putting others before yourself.”

One Nation’s bill was voted down 44-5. The only senators to vote in favour of it were from the Coalition – Senators Alex Antic and Gerard Rennick crossed the floor with fellow Coalition members Matt Canavan, Concetta Fierravanti-Wells and Sam McMahon, exposing a split in the Morrison government.

Senator Hanson and Senator Roberts dialled into Monday’s session remotely, meaning their votes were not counted.

On Tuesday, Senator Lambie told Sydney radio 2GB that her powerful speech had “brought out the nasties”.

“I will not play Russian roulette with people’s lives,” she said.

“If Pauline Hanson wants to do that … she can cope with that on her conscience.”

Senator Lambie told 2GB host Ben Fordham she was representing the needs of her Tasmanian constituency when she tore into the bill and One Nation.

“They’re really starting to feel the heat, they just want to get back to normal life as quickly as possible,” she said.

“They know, like I do, there is no other front-line defence [besides vaccination].”

On Tuesday, Senator Lambie she said Australia faced a serious situation and Mr Morrison needed to “stick by his guns and get on with it”.

“He can’t be playing both sides of the debate here. We can see what vaccinations are doing,” she said.

“We’re all getting a taste of our freedoms coming back and he needs to be really, really solid here.”

She called on Mr Morrison to be more decisive.

“[The Prime Minister] needs to show some leadership now. He needs to go out there and do that. And he’s running out of time.”

Mr Morrison has tried to downplay the Coalition split over mandates. But on Tuesday the revolt spread to the lower house, with LNP member George Christensen threatening to withhold his vote.

The PM has also taken aim at state vaccine mandates, saying unvaccinated Australians should not be locked out of businesses.

Labor has accused Mr Morrison of “double speak” after his comments from earlier this year expressing his wish for COVID jabs to be “as mandatory as you can possibly make it” resurfaced.

While minister for social services in the Abbott government, Mr Morrison was also the architect of the Coalition’s “no jab, no play” policy for child immunisations.

Jacqui Lambie accuses One Nation of leaking her phone number