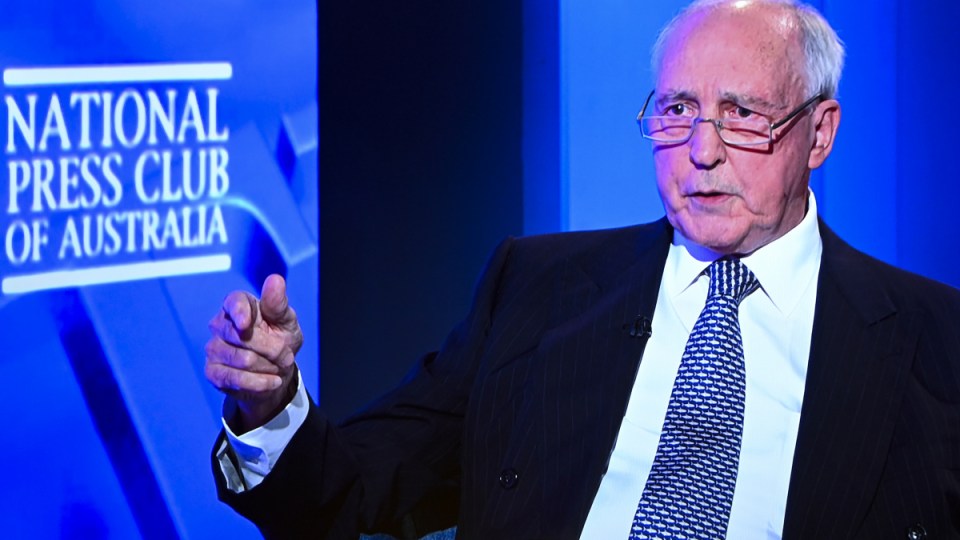 Former prime minister Paul Keating submitted the following opinion piece to The Sydney Morning Herald and The Age in response to an article written by their international editor, Peter Hartcher.

The publications had agreed to run the piece, but later refused to do so on the basis that it did not “substantively contribute to the debate”.

The back-and-forth provoked considerable discussion, with many believing the former prime minister should be heard.

The New Daily offered to publish Mr Keating’s views in the public interest and he consented. Here is the column The Sydney Morning Herald and The Age refused to publish.

I should have hoped that after 26 years away from the National Press Club, my appearance there, at the Club’s invitation, would have indicated to Peter Hartcher that I believed the invitation was important to accept – an invitation which had arisen from recent views I had put on Australian foreign policy, including in relation to China.

Instead, in Saturday’s Sydney Morning Herald and The Age, Peter Hartcher sought only to disparage what I had had to say, including comparing me to King Canute and in Hartcher’s case, not even understanding the Canute fable.

King Canute was not trying to direct the waves, as Hartcher depicts me trying to do and as does the cartoon; rather, Canute used the metaphor of his perching on the beach to “let all the world know that the power of the king is empty and worthless save for him, (meaning God) by whose will heaven and the sea obey eternal laws”.

So, right from the get-go, Hartcher mocks the motivation and tone of my speech.

He says, drawing on his misconception of King Canute, that, Canute-like, I gave “orders” to the United States about its geopolitics, that America has to come to a point of accommodation where it acknowledges China’s pre-eminence in East Asia and the Asian mainland.

Of course, I gave no such “order”, nor am I in a position to give such an “order”, save to remind the audience that the coldest of America’s Cold War warriors, the implementer under President Carter of the Nixon-Mao détente, Zbigniew Brzezinski, had said “America should tacitly accept the reality of China’s geopolitical pre-eminence on the mainland of Asia, as well as China’s ongoing emergence as the predominant Asian economic power”.

Apparently, Hartcher thinks I should not have quoted Brzezinski, a statesman of enormous achievement and stature to Australians in respect of China; rather, I should have fallen back on the philosophy of our very own internationalist, Peter Hartcher himself.

I quoted Brzezinski word for word – Hartcher disparages me for this, claiming I was, in effect, giving the US “orders”.

Hartcher claims that I “won’t acknowledge anything that doesn’t have China in charge”. This is an obnoxious fabrication.

What Hartcher seriously failed to deliver to the readership of the SMH and the Age was what I had said to the Chinese leadership in Beijing in 2013, in the presence of a Chinese Vice Premier – years before Hartcher and his accomplice, Chris Uhlmann, hit upon their voluptuous contumely about China.

I had this to say: “A lot of attention has been given to America’s responsibility to China’s rise – but China too has equal responsibility for creating a new stable and sustainable order in Asia. As it steps up to a larger leadership role it will at the same time need to be willing to accept and respect restraints on the way it uses its immense strength, because the acceptance of such restraints by great powers is the key to any successful and durable international order”.

I then went on to instance two points.

I said, first, and most obviously, “China should continually reaffirm by word and by deed its commitment to repudiate the use or threat of force to settle disputes”.

I went on to say, “the work of reassurance is never done, that the stronger China becomes the more it will need to reassure its neighbours and this will depend on deeds more than words”.

Second, “China will do a great deal to help build a continuing stable order in Asia if it quite unambiguously welcomes and supports a continued strong role for the United States in Asia”.

These were tough things to say to an audience of Chinese officials, but I said them in Beijing in 2013. And I repeated those words in my National Press Club address. But Peter Hartcher made certain that Sydney Morning Herald and Age readers would hear none of those critical references to the Chinese, because my utterances then, pull the rug from under Hartcher’s principal claim that I believe “Beijing is correct and everyone else should fall back in awe”.

Well, I certainly wasn’t falling back in awe in 2013 and Hartcher should have had the decency to have let Herald and Age readers know what firmly held views I had put to Chinese authorities back then.

But he did not let them know – he omitted to fully inform them.

Hartcher then misrepresented my longstanding view that Australia should find its security in Asia not from Asia.

He went on to say that the Quad is centred on Asia, notwithstanding that I had said at the Press Club, the Quad’s main failing and certainly in Australia’s terms, was to ignore the centrality of Indonesia and the ASEAN group of countries. In fact, I used a metaphor – the park seesaw. I said under the Quad, we are focusing on the wobbly ends – India to the extreme west and Japan to the extreme east, rather than on the pivot at the centre, which is Indonesia.

Indonesia is five flying hours from Australia. India is ten, Japan is fifteen. Our strategic bread is buttered in the Indonesian archipelago which arcs across our northern approaches. And I made the point that relying on India to fight the Chinese in the South China Sea or the Western Pacific, would be to rely on a state which will never meet such obligations. And what’s more, India demonstrated its feckless unreliability over last weekend in pulling the rug from under COP26, weakening the communique by refusing to accept the words ‘phase out’ of coal which would otherwise have achieved consensus.

A central point I made in the Press Club address is that the Quad is a joke and will present little value to Australia. Most military strategists agree it has no use as a device to contain China militarily.

Hartcher makes much of my dismissive response to questions about the so-called “14 demands” China has made of Australia. These – let’s remember – were a list of points of difference in Australian and Chinese policy positions handed by a junior Chinese Embassy official to a TV reporter in Canberra last year. That’s not the way any government in the world has ever conveyed serious policy demands to another one.

Hartcher at least found value in what I had to say about tensions over Taiwan. I said that Taiwan “is not a vital Australian interest – we have no alliance with Taipei – we do not recognise it as a sovereign state”. That statement was enough to draw out the Defence Minister Peter Dutton, to say a day later, that “it would be inconceivable that Australia as a US alliance partner, would not join in military action”. That is, military action against China by the United States, should it attempt to take Taiwan by force.

Notwithstanding that we have no obligation to defend Taiwan, the hard reality, as many American commentators agree, is the Americans would likely lose such a contest and in the event could withdraw from Asia altogether, leaving Australia to face the wrath of the Chinese state and its military to which we had been party in attacking.

America can withdraw from Asia to the safety of its west coast on the other side of the Pacific. But Australia cannot withdraw – it has no place to withdraw to.

This is where years of unprincipled and obsessive writing and misreporting by the Herald and the Age to its readership on China may, in the end, take us.

Peter Hartcher and his mate Chris Uhlmann have a lot to answer for and may in future, have a great deal more to answer for.

Paul Keating was the 24th Prime Minister of Australia

Paul Keating: The SMH misrepresented my views on China. This is my reply