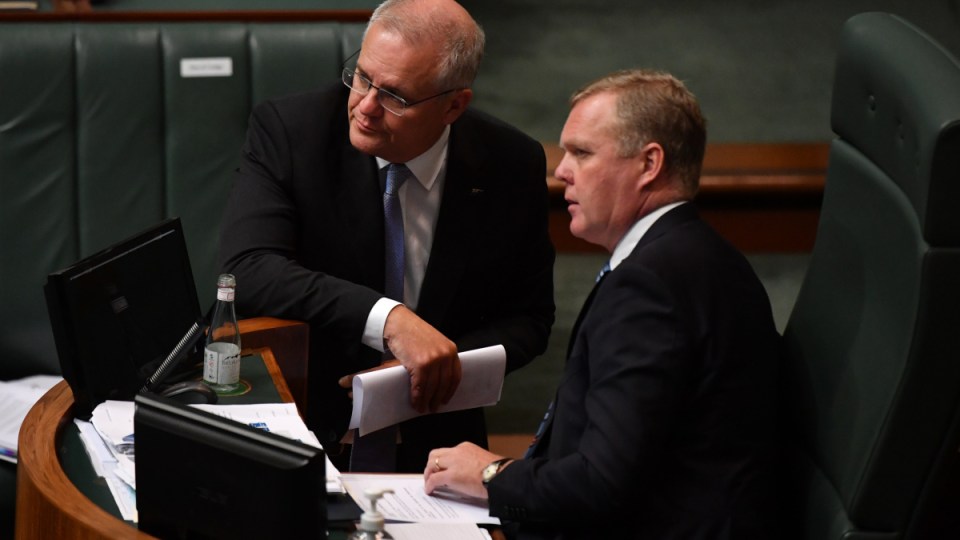 Tony Smith in conversation in the House with Scott Morrison. Mr Smith will resign as Speaker next month. Photo: Getty

Speaker of the House of Representatives Tony Smith will step down from the role next month.

Mr Smith previously announced he would resign from parliament at the next election.

However, on Thursday said he would quit as Speaker on November 22 to sit as a backbencher until the federal election.

“Being your Speaker has been an incredible honour, I love the job and obviously what I’m saying now is a very difficult decision,” he told parliament.

“I want to spend my remaining time in the house working exclusively for the people of Casey.”

The Liberal MP has been regarded as a firm and fair speaker by both sides of politics – and has regularly tackled the behaviour of opposition leaders and Prime Minister Scott Morrison.

Mr Smith said his decision had nothing to do with internal controversy within Coalition about his crackdown on question time behaviour.

Last week, the government sparked opposition outrage after blocking an inquiry into donations from an anonymous trust to former attorney-general Christian Porter. It came after Mr Smith had deemed there was a “prima facie” case to refer Mr Porter to Parliament’s privileges committee – and was a move never seen before in the Australian parliament.

On Thursday, Mr Smith did not address that issue directly, but said his decision was not related to any discontent with the government.

“It’s not because I’m tired of the job, I doubt I would ever tire of it,” he said.

“Let me say clearly if there is anyone within or outside this house who thinks my decision is the result of some disquiet with the government, you are wrong.”

“I believe that we have had the privilege to serve in the house when we had our finest Speaker,” Mr Morrison said.

“I know you haven’t arrived at the decision lightly.”

Opposition Leader Anthony Albanese said the Victorian MP had been an outstanding Speaker.

“Not everyone who comes in this place is a [parliamentarian] but you are, you respect the history of the Westminster system,” he said.

Mr Smith has served in parliament since 2001, and said the timing of him stepping down as Speaker was delayed due to the pandemic.

“Had it not been for the responsibility I’ve had to the operation of the house during this COVID time, I would have made this speech some time ago,” he said.