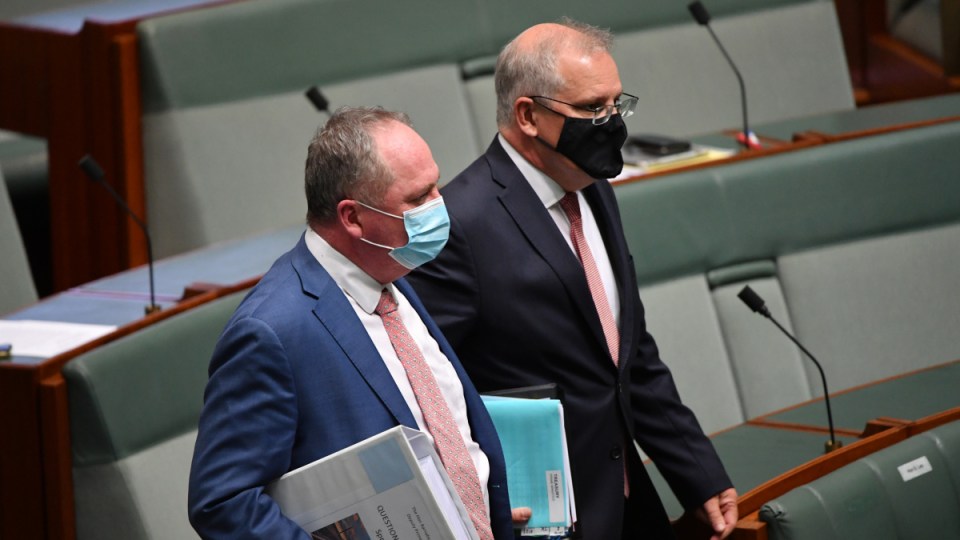 On the face of it Scott Morrison has stared down Barnaby Joyce and heads to the Glasgow climate summit with his Coalition government locked into a net-zero emissions target by 2050.

However, there are clear signs that was the easy part for the Prime Minister.

If you could believe the theatrics of the past three weeks, the Nationals were threatening to blow up the government if the PM dared head off to the most significant international conference in decades without their stamp of approval.

Last week Mr Morrison called that bluff when he told Parliament that the decision would be made by his cabinet – the engine room of government where the Nationals are a distinct minority.

Despite some misgivings, his Liberal party room had already given him the green light and, besides, he needed to keep his urban moderates and their voters on side.

Deputy Prime Minister Barnaby Joyce even spelled out it could mean the Nationals withdrawing from the government and supporting the Liberals as a minority administration from the cross bench, though he quickly backed away from that and pleaded for more time.

As the impasse dragged into second week you couldn’t be blamed for thinking the political Punch and Judy show was getting serious.

The Labor Opposition isn’t buying it.

Anthony Albanese is firmly of the view it was more a pantomime to allow the Nationals to play to their base, particularly in three at-risk Queensland coal seats and to keep faith with their substantial fossil fuel industry backers.

The Labor leader’s suspicions are fed by the price Mr Morrison has had to pay to keep his government intact.

There are substantial compromises that weaken any claim the government shares the urgency of the United States, Britain or the Europeans.

Thanks to pressure from Mr Joyce, the Prime Minister heads to Glasgow unwilling to take a more ambitious 2030 emissions reduction target than already laid down by his predecessor Tony Abbott five years ago.

This undermines the primary purpose of the conference.

Although Scott Morrison says he accepts the science of climate change, he clearly has more sympathy with Mr Joyce’s climate action scepticism.

A scepticism still strongly held, according to Nationals Party room sources who say the Deputy Prime Minister on Sunday told them he didn’t support net zero but was happy to accept the will of the majority.

The New South Wales Treasurer and Environment Minister Matt Kean is a stark contrast to the Coalition leadership in Canberra and exposes how weak conviction leads to feeble outcomes.

The NSW Coalition government is committed to a 50 per cent emissions reduction target by 2030.

On Insiders Mr Kean said “the idea that you can have just a projection doesn’t stack up for all of us who think that we should take climate change seriously and think that there are huge opportunities in doing so”.

Ironically the Prime Minister and his fellow converts in the News Corp tabloids around the nation on Monday were trumpeting the opportunities net zero will present for jobs and growth something they all decried as reckless at the 2019 election.

Mr Morrison in question time ridiculed Labor for not having a plan to reach the 30-year target apparently oblivious to the fact that so far he hasn’t taken the nation into his confidence about his hitherto secret plan.

Hopefully before he boards his plane on Thursday all will be revealed.

Either way he won’t be asking the Parliament to do anything about it.

Nine Nationals are understood not to have supported the target on the weekend and the Prime Minister is clearly unwilling to test their resolve on the floor of the Parliament even though Mr Albanese on Monday said the Opposition would willingly give him the numbers.

Already one debt for the Nationals support has been paid: Resources Minister Keith Pitt, an outspoken critic of the target, has been given a pay rise and a seat back at the cabinet table.

The test in the months ahead of the election will be if this has bought Mr Pitt’s silence if not his support for the PM’s task of convincing the nation he “really and truly” is serious about it all.

No doubt about it, that’s the hard part.