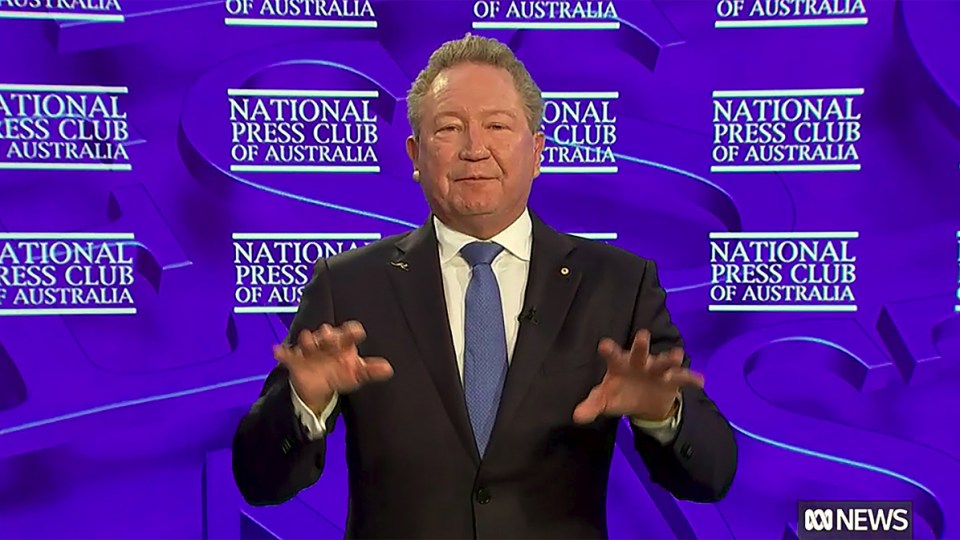 Scott Morrison is under pressure to disregard dissent within the Nationals on a target of net zero emissions by 2050 for the sake of Australia’s economic future.

The final decision on the climate policy Australia will take to the looming COP26 conference in Glasgow effectively lies in the hand of the junior coalition partner.

Nationals members will meet on Sunday to discuss a technology-based climate plan which was the subject of federal cabinet talks on Wednesday.

“My advice to our Prime Minister is to proceed,” Dr Forrest told the National Press Club on Thursday.

“I do believe that – if there’s holdouts in the National Party – the truth of my investment, other people’s investment, and what the world is doing and how the world is moving will become increasingly clear.

“There’s nothing like a politician to react to what their voters think. They might not be leading them now, they might be just politicking now, but people and Aussies will see through it.”

Agriculture Minister David Littleproud acknowledges some in the Nationals are unlikely to budge on their staunch opposition to any target.

But he has indicated if majority agreement can be achieved that could be enough for the plan to go forward.

“There’s an overwhelming support within the party room to be pragmatic, to sit down, to listen, to work through,” Mr Littleproud told Triple M.

“These are as much driven by global issues more than anything, around where energy sources will come in the future and also where our foreign capital will come from.

“We do need capital to come in, not just at a private sector, but also to buy our Australian bonds.”

Cabinet minister Bridget McKenzie has been adamant there will be no agreement if the Nationals don’t feel the deal is “right for the regions” and has derided the idea of large numbers of high-paying jobs in green energy.

Stepping up pressure on the Nationals, Dr Forrest publicly recounted a conversation with Deputy Prime Minister Barnaby Joyce, who told him: “I might be a cynic about the capacity to fix global warming, but I’m a believer in the economic opportunities presented by it”.

“I want Australia to not be disadvantaged by this but to be advantaged. I want to capitalise on the opportunities that have been presented to our economy by a low emissions future,” he said.

Net zero emissions by 2050 is considered globally the bare minimum ambition for governments.

Mr Morrison is under intense pressure domestically and abroad to formally raise Australia’s 2030 target as well.

Suggestions Mr Morrison would simply rely on the fact Australia is “projected” to exceed its current emissions reduction of between 26 and 28 per cent on 2005 levels were shot down by Dr Forrest.

“If you don’t nominate a target, all of us in business don’t know what to aim for,” he said.

“The worst thing we can have to make investment decisions and business decisions is uncertainty.”

Dr Forrest is investing in green hydrogen produced using renewables alongside the Queensland and NSW governments.

Get on with it: Twiggy Forrest’s message to Coalition on climate