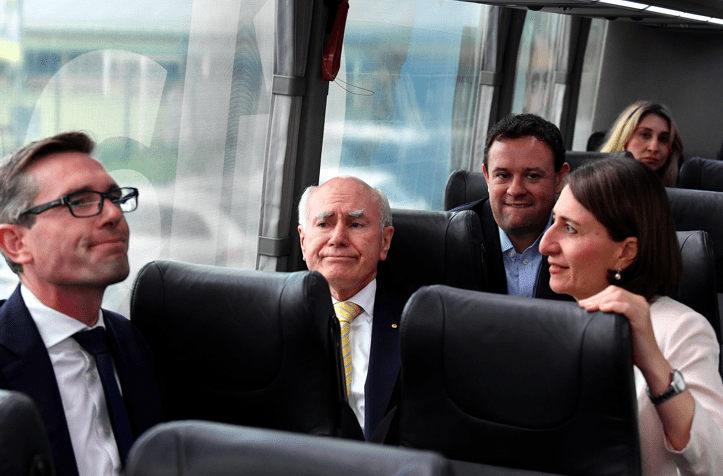 Former prime minister John Howard has thrown his weight behind Dominic Perrottet to become NSW premier after the shock resignation of Gladys Berejiklian.

There are five senior liberals vying for the top job but Mr Howard wants Mr Perrottet to lead the state.

“I do think his background, his experiences as Treasurer and very importantly his commitment to economic reform mean that he, of all of them, is the best person to take over the helm,” Mr Howard told Sky New’s Sunday Agenda program.

“We need to keep going with things like economic reform, he is very committed to taxation reform.”

Planning Minister Rob Stokes is so far the only senior cabinet minister to formally throw his hat in the ring, arguing he possesses “the right balance of experience, vision and integrity” needed to assume the role at such a pivotal time.

Another considering his options is Attorney-General Mark Speakman.

“I’m heartened by the encouragement I’ve received from colleagues to nominate and I’ll have more to say tomorrow,” he said on Saturday.

Other potential contenders include Jobs Minister Stuart Ayres and Transport Minister Andrew Constance, while Environment Minister Matt Kean and Police Minister David Elliott are being spoken of as possible deputies.

A wildly popular premier, Ms Berejiklian since her resignation has been lauded by everyone from state Opposition Leader Chris Minns – who said he “cannot fault her dedication and hard work” – to Prime Minister Scott Morrison, who praised her “heroic” qualities.

Constituents on Saturday flocked to her home and office with flowers and balloons, while others put up handmade signs.

Ms Berejiklian announced her resignation on Friday after the state’s corruption watchdog disclosed the 51-year-old was under investigation for potential breaches of public trust.

The ICAC says it is investigating whether she “exercised public functions” in a position of conflict given her secret five-year relationship with ex-MP Daryl Maguire.

Teary and at times angry, she said on Friday she had “no option” other than to resign but denied any wrongdoing.

She will also resign from parliament as soon as a by-election for her seat of Willoughby on Sydney’s Lower North Shore can be held.

Researchers see hope for new and cheaper alternatives to anti-depressants
NSW’s Rob Stokes: I’ll stick with Gladys’ plan to leave COVID behind if you make me leader
Today's Stories