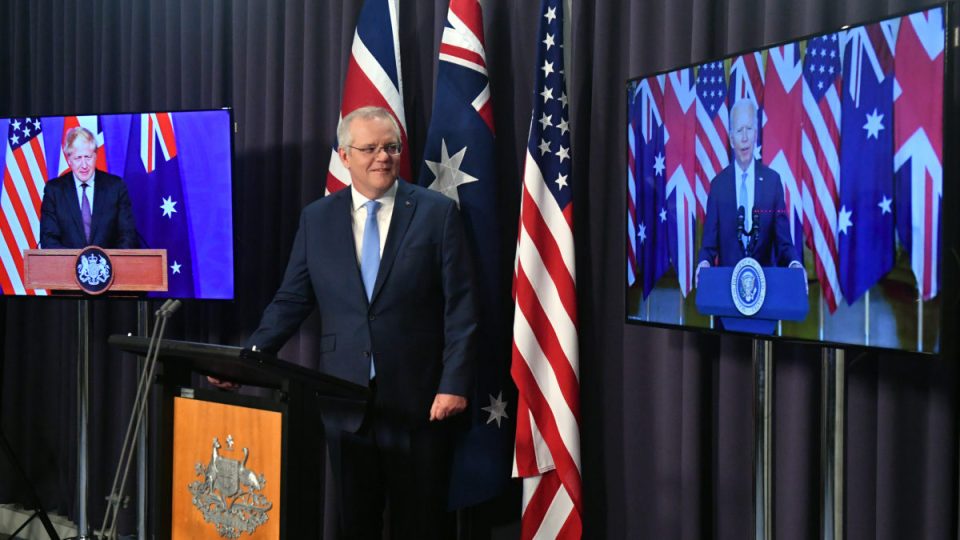 The AUKUS announcement has raised questions around cost and transparency. Photo: AAP

The Morrison government’s intercontinental announcement of a new defence alliance and a historic nuclear submarines plan came with a lot of flash but left many questions unanswered, with key details missing on cost, timing and even what Australia will actually receive.

The financial hit will likely far exceed the $90 billion price tag on the delayed – and now dumped – plans from French shipbuilder Naval Group.

But the real costs could extend beyond the nation’s wallet, with France’s government livid at what it called “a knife in the back” of the alliance, and China claiming the new AUKUS alliance “undermines regional peace”.

“We have entered, no doubt, a new era, with new challenges for Australia and for our partners,” Prime Minister Scott Morrison said on Thursday.

“This challenge will require more of us in Australia.”

But the PM and senior Defence officials weren’t yet able to confirm key basic details of the plan to build nuclear subs in Australia.

They cited an 18-month consultation process that would investigate what Australia’s needs were and how the nation could stand up an industry to build nuclear submarines onshore.

In a briefing call with media, Defence officials said Australia would look to build at least eight nuclear submarines. That compares with the 12 ordered under the Naval Group contract.

The submarines are powered by a nuclear propulsion system but will carry conventional weapons, not nuclear missiles, UK Prime Minister Boris Johnson and US President Joe Biden stressed.

Mr Morrison declined to put a price tag on the new subs, saying it was “yet to be determined” and would depend on whether Australia decided to build American or British ships, which is also yet to be announced.

He did hint the cost would exceed Naval Group’s docket, saying Australia’s military spending would continue to grow past the current two per cent of GDP as he claimed “that’s what living in this new world looks like”.

“The cost of nuclear-powered submarines is much higher than conventional subs,” she told The New Daily.

Mr Morrison was able to confirm he hoped the building of the subs would begin “within the decade”, and that the first of them would be “in the water… before the end of next decade”.

It means that, potentially for the next 18 years, Australia will likely remain equipped only with its current six Collins-class subs, which were commissioned in the 1980s. Those existing subs will undergo a “Life-of-Type Extension” to keep them operational past their current use-by date.

The nuclear submarines will be built, at least partly, in Adelaide but it hasn’t been confirmed exactly how much of the construction will occur here.

It’s also unclear whether Australia will need to develop its own uranium project to manage the subs’ nuclear fuel, or whether it will be obtained from America.

The submarines are said to not need to be refuelled in their lifetime, with their nuclear fuel built to last decades.

“There’s a lot of complexities that go with nuclear submarines and Australia doesn’t have the capability,” Professor Rublee said.

“It’s not that we don’t have the capacity. We’re a very educated scientifically literate country, and ANSTO [the Australian Nuclear Science and Technology Organisation] is one of the best resources in the world, but Australia has no experience in any of this.”

“Either we bring in a lot of Americans to get the work done quickly, or we learn from the Americans and it takes a lot longer.”

Greg Moriarty, secretary of the Department of Defence, said concerns about management and disposal of nuclear waste were also part of the consultation period.

One of the few concrete details revealed was Mr Morrison’s admission the federal government had already spent $2.4 billion on the Naval Group’s Attack class build, which has delivered zero submarines.

He said that money had also gone into “further building our capability” and was a “good investment”.

The French designer is also likely to be entitled to massive compensation payments – potentially hundreds of millions of dollars, according to a 2019 ABC report – with Australia dumping the contract.

The new AUKUS alliance between Australia, the United Kingdom and United States, focusing on “peace and stability of the Indo-Pacific”, has an obvious subtext; resisting China’s growing influence in our region.

The alliance raises Australia’s profile as a major military player in the region, plus create a new anchor for British and American influence in the region. That includes Australia getting nuclear subs, becoming just the seventh nation in the world with that technology.

The first step of that is Australia gaining access to top-secret American technology on nuclear submarines, which White House officials told journalists would allow Australia to “play at a much higher level and to augment American capabilities” in the region.

“That’s what you have to do to protect Australians and to keep Australians safe in what is a radically and rapidly changing part of the world,” Mr Morrison said.

Labor’s Anthony Albanese said the opposition was broadly supportive of the plan, but laid out three key caveats; that it not require a domestic civil nuclear industry, no acquisition of nuclear weapons, and that the deal is compatible with Australia’s non-proliferation treaty obligation.

He also called for transparency on how much the deal would cost, how long it would take, and exactly what it means for local jobs and industry, claiming the new start on the subs program was “the single biggest admission of failure on the part of the Morrison-Joyce government”.

“A program that is running 10 years late from its original schedule and $40 billion over budget,” Mr Albanese railed.

“Eight years into this program and after three separate deals, Mr Morrison is now starting from scratch.”

Greens leader Adam Bandt slammed the plan as “floating Chernobyls” and said his party would “fight this tooth and nail”.

Despite assurances from Mr Biden and Mr Morrison they appreciated France’s effort in the regions, it incensed the French government.

Foreign affairs minister Jean-Yves Le Drian and armed forces minister Florence Parly called the decision “regrettable”, claiming it was “contrary to the letter and the spirit of the co-operation which prevailed between France and Australia”.

The French politicians slammed “an absence of coherence that France can only observe and regret.” In a later speech, Mr Le Drian claimed the change was a “knife in the back”.

Considering the obvious subtext of the Indo-Pacific alliance, the Chinese government was also quick to fire criticism.

Global Times, a Chinese state media outlet, said in an editorial “we advise Canberra not to think that it has the capability to intimidate China if it acquires nuclear-powered submarines and offensive missiles”.

Naval Group called the deal’s scrapping “a great disappointment”. The company said it offered Australia “commitments never made by any industry” on technology and local employment.