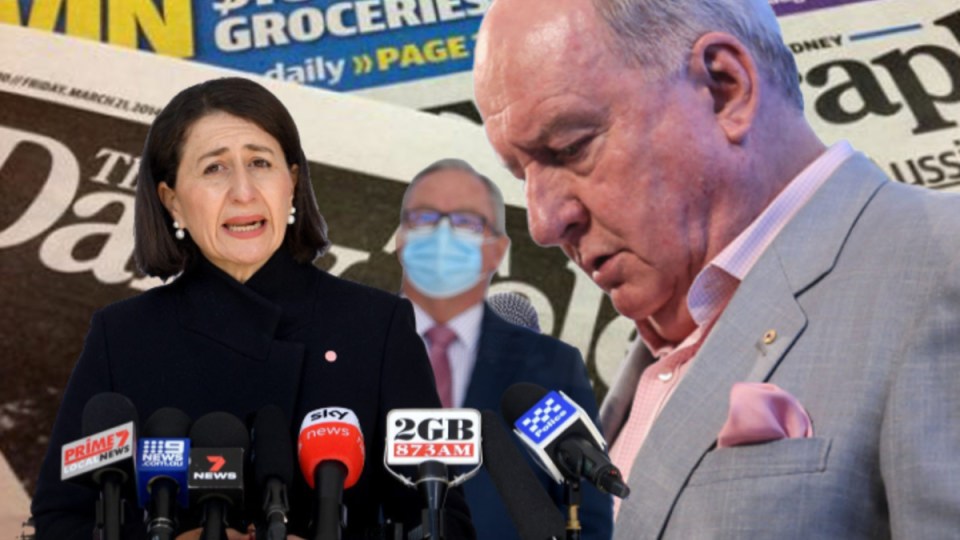 As Australia enters a pre-election phase, it matters what the Murdoch media do, writes Denis Muller. Photo: AAP/TND
analysis

Elements within News Corporation are now fighting among themselves over how its platforms should position themselves in response to the worsening COVID crisis in New South Wales.

This has become clear with the decision by the editor of News Corp’s Daily Telegraph, Ben English, to ditch Alan Jones as a columnist.

Over the past few weeks, as the coronavirus outbreak got inexorably worse, the Telegraph ran a series of characteristically shrill columns by Jones attacking mask-wearing, lockdowns and NSW Premier Gladys Berejiklian.

Yet Jones also promotes these opinions on News Corp’s Sky News, where his Sky-at-Night slot is undisturbed. Indeed, Jones makes a virtue of this, telling The Sydney Morning Herald:

On July 29, the Telegraph also took the opportunity, provided by an outburst against Jones by the NSW health minister, Brad Hazzard, to distance itself from its former columnist, referring to him as a “Sky News host”.

At The Australian on July 30, Jones’s opinions were confined to rugby union.

Trying to read the entrails of what goes on in News Corp is akin to Kremlinology, but this is the second piece of evidence in the past couple of weeks that the Telegraph is executing a delicate pivot.

A decision to switch to an overt anti-Coalition position would be well above the editor’s pay grade. However, a couple of weeks ago, the Telegraph’s editor-at-large, Matthew Benns, wrote a curious critique of Scott Morrison’s handling of vaccination and quarantine, written as if by the Morrison family dog. It contained quite a lot of nipping at Morrison’s heels.

Back to the future

Meanwhile, the paper’s opinion columns have been replete with morale-boosting propaganda reminiscent of the 1940s and 1950s.

It has continued to report the growing COVID crisis straight, publishing pictures of a strained-looking Berejiklian but refraining from attacking her in commentary.

Putting all this together, the Telegraph seems to be positioning itself as champion of an heroic people, contingently tolerant of Berejiklian, intolerant of attacks on her policies, restless with Morrison, yet anxious not to damage the Liberal Party politically.

The degree of difficulty involved in staying upright while executing this manoeuvre is considerable.

Her proposition is that the 172 cases of the Delta strain reported on July 28 was nothing like as bad as the 700 cases a day at the height of the Victorian crisis last year, even though, she said, Delta was three times more infectious than last year’s strain.

This, she said, should cause people in NSW to “take heart”.

So a snapshot one-point reading of a curve that is still rising steeply – the case numbers on July 29 were 239 – is compared with the peak of a separate outbreak of a strain that Credlin says was three times less infectious.

If the people of New South Wales take heart from that, they are really grasping at straws.

Credlin does not attack Berejiklian, masks or lockdowns as Jones does, and she carries a torch for the Coalition while also trying to boost morale in Sydney.

Andrew Bolt threads his way through this maze by attacking politicians who he says have “smeared” the people who took part in the anti-lockdown marches on July 25. At the same time he remains uncharacteristically agnostic on whether lockdowns are right.

Last year Bolt was calling lockdowns an over-reaction. It evidently makes a difference when it is your side of politics doing the locking down.

As Australia enters a pre-election phase, it matters what the Murdoch media do. Its newspapers represent about two-thirds of the nation’s metropolitan daily circulation, with monopolies in Brisbane, Adelaide and Hobart. In August, Sky News will re-enter free-to-air television via several Southern Cross Austereo regional channels, which it claims will give it an audience of seven million.

What the Telegraph does is particularly important because it is Murdoch’s main populist political attack dog in Australia. It circulates widely in western Sydney, where there are several marginal seats.

Reading the entrails is an inexact science, to put it mildly, but there is a public-interest reason for trying.

Denis Muller, Senior Research Fellow, Centre for Advancing Journalism, The University of Melbourne. This article is republished from The Conversation under a Creative Commons license. Read the original article.