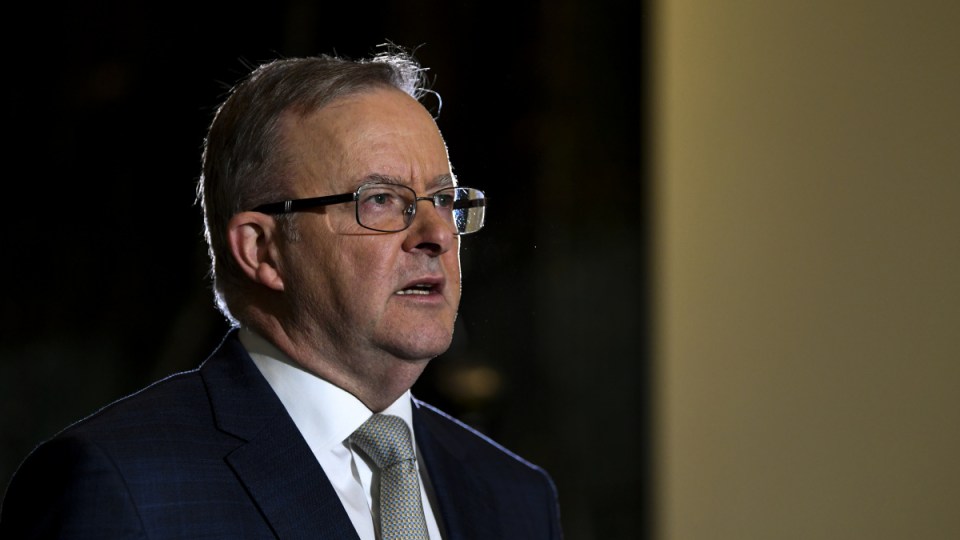 Anthony Albanese's sweeping announcements on Monday are likely to upset some within the party. Photo: AAP
analysis

After making itself a mega target in 2019, Labor has confirmed it will be a small one in 2022 by promising an Albanese government would keep the 2024 income tax cuts and not disturb negative gearing and capital gains tax.

The plan to scrap franking credit cash refunds, which saw a Coalition scare campaign at the last election, was ditched some time ago.

With the Coalition having limited scope to make big promises, and the opposition determined to confine itself to a fairly narrow agenda, the election seems likely to be centrally about the exit from COVID.

A special virtual caucus meeting was held on Monday to approve a shadow cabinet decision on the tax measures. Caucus members were only given a few minutes to read the material.

Some in Labor will be unhappy at the decision, especially as the opposition has consistently criticised the tax cuts as favouring people on higher incomes.

The decision also means Labor has constrained the amount of money it will have to spend on promises.

But with polls showing Prime Minister Scott Morrison in a trough, Labor has become more optimistic about its election prospects and opposition leader Anthony Albanese is determined to ditch any baggage in pursuit of a win.

A focus on the PM’s COVID response

The government will counter with Labor’s past statements on the issues.

At the caucus meeting, shadow Treasurer Jim Chalmers, facing questioning about the likely attitude of Labor party members to the package of tax decisions, said parts of the political spectrum “would not applaud” it. He said it had been an “on balance” decision.

The opposition leader told his troops Labor was “cutting through” with its message that Morrison had two jobs – the vaccine rollout and putting in place an effective quarantine system.

Albanese and Chalmers said in a statement that with its decisions, Labor was providing certainty to working families.

When it comes to the economy, the next election will be about the prime minister’s dangerous and costly failures to manage the pandemic.

His failures on vaccines and quarantines have caused lockdowns 18 months into this pandemic, and those lockdowns are causing billions of dollars in damage to the economy.

an Albanese Labor government will deliver the same legislated tax relief for more than nine million Australians who earn $45,000 a year or more as the Morrison government.

As the tax cuts are already legislated, a Labor government would not necessarily have been able to get their repeal through the Senate anyway.

At the last election, Labor proposed removing negative gearing for people who bought existing properties and cutting the capital gains discount from 50 per cent to 25 per cent.

In a cynical move that is unashamedly motivated by the pursuit of power, Anthony Albanese is now trying to convince voters that Labor doesn’t want to abolish negative gearing or raise taxes on capital gains.

However, if we are to take the Labor Party at their word, ending negative gearing is an issue that senior Labor figures are deeply committed to.

Sukkar backed up his argument with a bunch of quotes from Labor figures, including Albanese and Chalmers, supporting the old policy.

But the Housing Industry Association welcomed the Labor announcement on negative gearing and capital gains tax, saying it “will provide certainty for the housing industry and for Australians that are looking to invest or rent”.

Albanese also announced Labor would introduce a bill into the Senate “to improve the transparency and accountability of ministerial decisions with grant programs”.

This is to highlight the revelations about the political rorting in the government’s car park program at the last election.