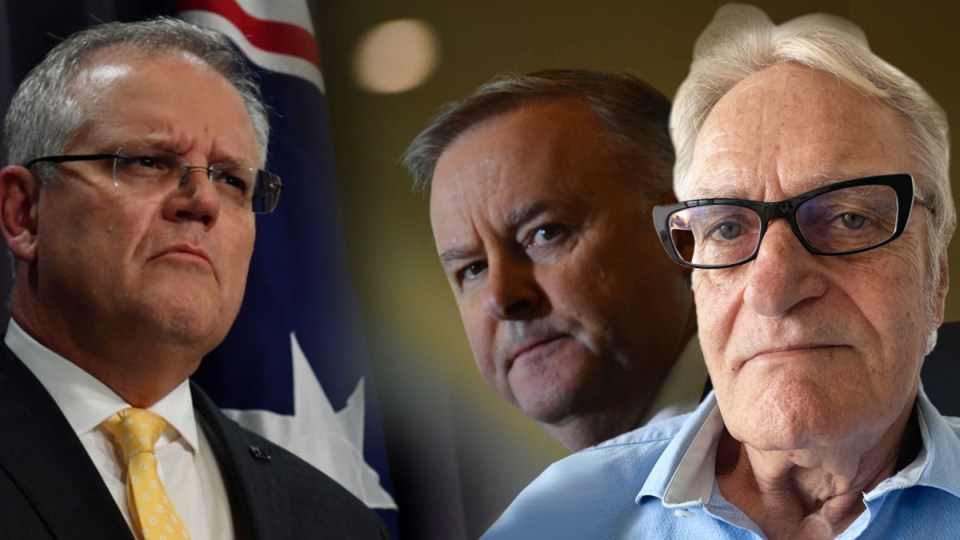 Scott Morrison is gearing up to take on Anthony Albanese in the forthcoming federal election. Photo: Getty/TND
opinion

On a scale of one to the most brazen political stunt ever, Peter Beattie’s bold election campaign pitch in early 2001 was seriously off the charts.

Surrounded by metaphorical sharks, with allegations of electoral malfeasance reaching all the way to the deputy premier, Beattie decided to hang a 5000 lumen lantern on his problem and own it in a spectacular way.

Giving the appearance of making good on a promise to clean up the stinky problems engulfing his government and party, Beattie illustrated his self-punishment by swimming in a big shark tank (complete with sharks).

Beattie’s subliminal message was clear: “Don’t punish my government at the ballot box, I’ll punish them for you. I’ll clean up the mess and deal with those who have let us all down.”

Beattie even had a marketing brand for his message, ‘Restoring Integrity – the Beattie good government plan for Queensland’. It was released in Barcaldine, the birthplace of the Labor Party.

The marketing was faultless.

Shameless? Very. But it worked a treat for Labor. A premier and a party under intense political pressure emerged with a glorious victory, picking up 22 seats on the back of a 10 percent swing.

With a national election coming into focus and the Prime Minister under just as much pressure as Beattie was feeling 20 years ago, this kind of dramatic message shape-shifting might be back in fashion.

We know Scott Morrison is every bit as shameless as Beattie, sharing an uncaring self-regard while chasing the sole dream of winning, at any cost. Morrison’s self-proclaimed “miracle” win in 2019 – a victory he said belonged to the “quiet Australians” – was never an affirmation of the Prime Minister or any particular policy or platform.

The basis of that electoral triumph was “I’m not Bill Shorten”, plus plenty of opportunistic scare tactics over ‘death taxes’, retirement funding and the spectre of massive debt and deficit.

Now Morrison is going to run a campaign with two overarching themes: you’d rather be in Australia than anywhere else and Anthony Albanese is hopeless and stands for nothing.

There’s a good chance this will work.

While the Morrison government’s handling of the COVID pandemic has been patchy at best and bumblingly incompetent at worst, the fact most people haven’t contracted the virus and still have their jobs keeps the government on the right side of the hierarchy of needs.

Also, Albanese is not making an impact. He has some precise and pertinent criticisms and analyses of what the government has been doing but falls noticeably short of answers and alternatives in respect of what to do next.

He is making no connection with most people and even those who willing him to succeed show increasing frustration or have given up listening.

The question hanging over national politics is whether Morrison will risk having an early election.

The risks are on either side of this equation, with an early election being one held in October or possibly November this year. One earlier than that is almost certainly out of the question.

The Victorian redistribution still has a few technical loose ends to be tied off and there are the current lockdowns in Victoria and New South Wales.

Holding an election during the footy finals blocks out Saturdays through September which circles October 9 as the most likely date for a 2021 poll.

October has the power of historical luck for the Liberals: the 2004 unlikely victory by John Howard over Mark Latham was held on this date and many in the Coalition would fancy an electoral echo if Morrison made this bet.

While October 9 is the most tipped date, there is increasing speculation the poll might be held on October 23, giving the government some breathing space from the current lockdowns.

An October election also places Morrison on the politically easier side of the Glasgow United Nations conference on climate. The Nationals are resisting the push to fall into line with the zero net emissions by 2050 “target”, threatening privately to “blow the show up” if they are told to toe the line on climate.

The Nationals under Barnaby Joyce see this as a deal breaker or maker. For Morrison a revolt by his rural and regional junior partner would threaten metropolitan seats, especially in Melbourne where as many as three electorates could be in danger from popular independents.

This is the most compelling reason for Morrison to go early. Keeping the Coalition together with the sharply dissonant positions on climate is a powerful, scarifying risk.

Otherwise, things might not get any better, as messy as it all appears right now. There is no certainty rolling lockdowns will stop until well into next year, given the possible hurdles between where we are and where we need to be in getting enough people vaccinated. Many health experts believe we will need to vaccinate a sizeable portion of very young Australians – at least 12 years and above.

This is why Morrison has been urging anyone he thinks will listen they should get a shot of AstraZeneca, regardless of the statistically insignificant chance of blood clotting.

On the economic front things might look rosy right now – and they might continue on the upside well into next year. However, there might be some serious economic blowback as business, especially small and medium-sized operations, find the end point of what’s been a hard slog arriving too fast.

Another factor overlooked and forgotten is an inescapable election being held next March – in South Australia.

South Australia’s Steven Marshall should be confident of re-election but he has cross currents and uncertainties to worry about – as well as facing a capable and likeable Labor leader in Peter Malinauskas.

This could make it difficult to have a federal campaign running through March.

This contest mean Morrison’s windows of opportunity are confined to an election called in January for late February or one that repeats what happened in 2019 – announced in very early April and held in the second or third week or May.

Morrison’s move might be to go before he runs out of room to move.