Prime Minister Scott Morrison has unveiled a four-stage plan he says will navigate Australia to the other side of the coronavirus pandemic.

Mr Morrison said Australia had “quite a journey ahead” with the pandemic, but described the plan as “the pathway out of COVID-19”.

The roadmap, with the catchy title ‘The National Plan to Transition Australia’s National COVID-19 Response’, was agreed upon by the PM and the premiers at Friday’s National Cabinet meeting.

While Mr Morrison refused to put a timeline on the plan, this is what we do know about the four-step stages toward ‘COVID normal’:

Phase One: Vaccinate, prepare and pilot

We are currently in phase one of the plan, which is to  “vaccinate, prepare and pilot”.

This is a continuation of what is happening now, with some changes to who can come into the country and how they quarantine.

Australia will continue to suppress the virus while we wait for the vaccine rollout.

While this is happening international arrivals will be halved. The weekly cap on international passenger arrivals into Australia will go from 6,070 to 3,035 by 14 July. 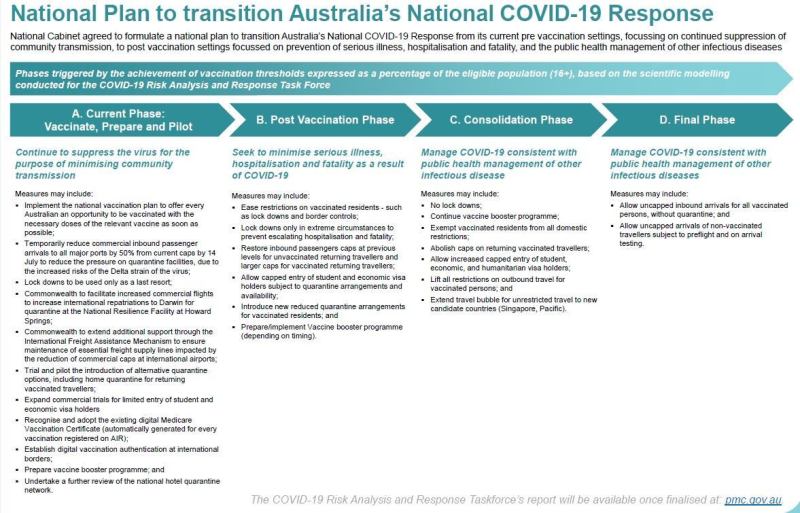 Cutting the caps was not the preferred way forward for either Mr Morrison or NSW Premier Gladys Berejiklian but was decided by national cabinet.

Mr Morrison said it would not stop leaks from hotel quarantine but “it is believed that is a prudent action” against the highly infectious Delta strain.

There will also be trials of alternative options for those people entering Australia who are fully vaccinated – for example, the ability to quarantine at home for just seven days, instead of 14 in a hotel.

South Australia has put up its hand to start the trial.

Moving on to the next phases relies heavily on the rate of vaccination.

As of Thursday, 7.9 per cent of Australians are fully vaccinated while 29.6 per cent have received at least one shot.

Phase Two of the plan will commence when enough Australians have been vaccinated, though we don’t yet know what number that is.

Mr Morrison said it will be determined by a “scientific number” in agreement with each state and territory.

Once enough of us are vaccinated, lockdowns will become less frequent, only used to curb the virus as a last resort.

Those who are vaccinated will have fewer restrictions when lockdowns do occur.

The government will also restore caps for international arrivals and increase caps for “those who are vaccinated”.

Mr Morrison said we could “possibly” enter this stage next year.

Phase three is about no more lockdowns.

This phase is where we start to treat COVID-19 as we would any other infectious disease, such as the flu.

“The hospitalisation and fatality rates that you would see from COVID-19 would be like the flu,” Mr Morrison said.

Importantly, by this phase, there will be no more lockdowns.

Other changes may include a relaxed border policy, with the abolition of caps on returning travellers and lifting all restrictions on outbound travel for those who are fully vaccinated.

Phase Four:  A kind of normal

When we hit Phase Four we are out of the woods – almost.

Mr Morrison described this phase as a return to normal life, with only some small changes intended to track where the virus is, such as pre- and post-flight testing for those coming into Australia.

Four steps to ‘COVID normal’: Scott Morrison sketches his roadmap out of the pandemic