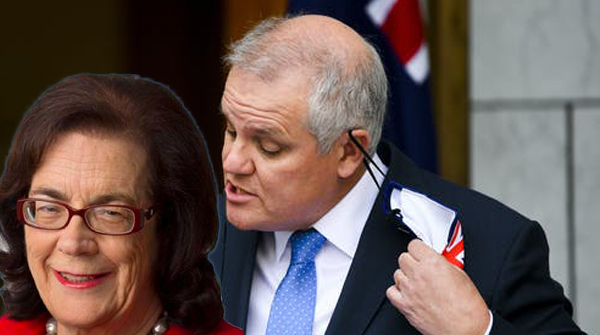 The Prime Minister hopes the new plan will help drive vaccinations, and "provide him with some political cover".

The plan to transition Australia from COVID-as-crisis to COVID-like-flu that Scott Morrison has announced is designed to send a positive message – and an exhortation – to a community jaded by lockdowns, aborted holidays and closed borders.

But its most immediate and concrete measure is a negative.

The caps on returning travellers coming on commercial flights will be halved, as the country deals with the highly infectious Delta strain. The reduced caps, which several states pressed for, are set to last into next year.

The federal government will increase the number on its sponsored flights bringing people to the Howard Springs quarantine centre. But that won’t compensate for the slashed cap, in what will be a blow to many people already finding it hard to return home.

On the more positive side, alternative quarantine options will be trialled, including home quarantine for returning vaccinated travellers, and there will be expanded commercial trials for limited entry of student and economic visas holders.

Under huge political pressure over the slow vaccine rollout – jabs are currently around eight million – a major aim of Morrison’s four stage plan is to incentivise people to get vaccinated. 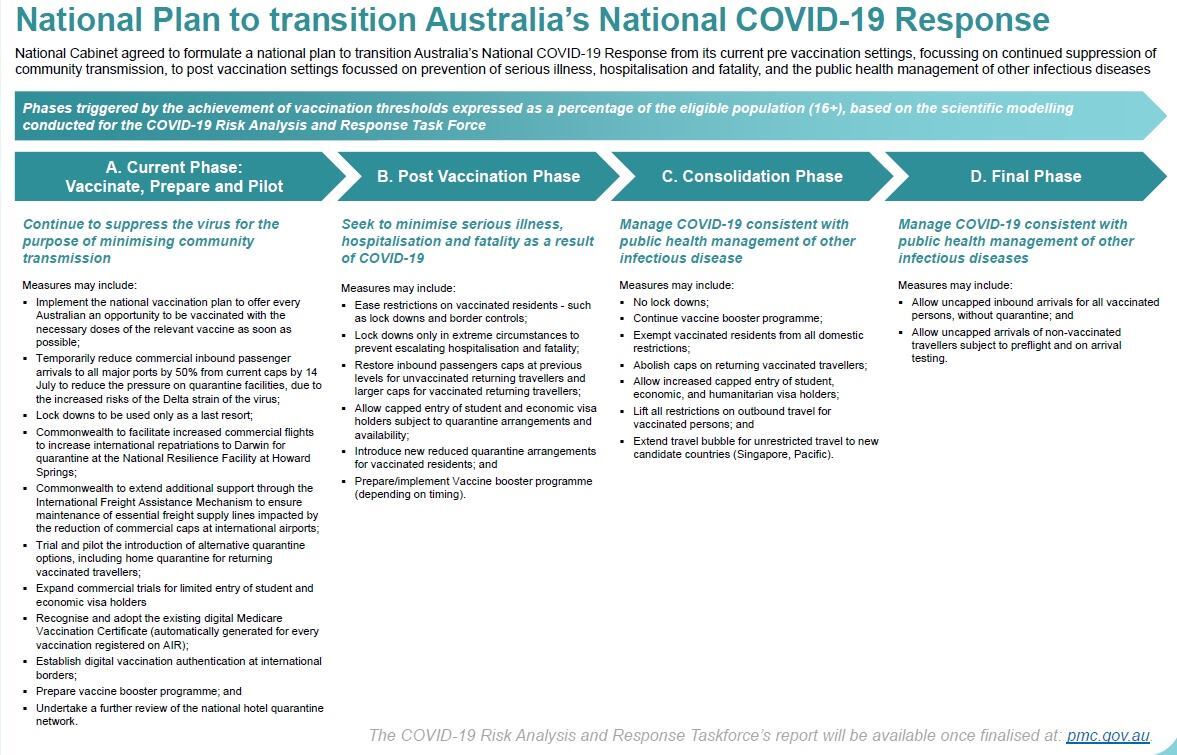 At present the rollout is being held back not just by vaccine shortages and other problems but also by hesitancy – and in some cases complacency. The bad publicity around AstraZeneca has contributed to hesitancy.

Under the plan, yet-to-be specified vaccination coverage will be the key to eventually managing COVID-like other infectious diseases, notably the flu.

But the “post-vaccination” second stage of the plan won’t be reached until next year – and that’s assuming all goes well.

A vaccination threshold for the easing, minimising or eschewing of restrictions, including lockdowns will be set on the basis of medical evidence and scientific modelling currently being done at Melbourne’s Peter Doherty Institute.

Morrison said of the vaccination threshold: “This will be a scientific number. It won’t be a political number, it won’t be an arbitrary number.” It could include targets for vulnerable populations such as the over-70s.

Experts give a wide range of rates for the appropriate level of vaccination needed for adequate community immunity.

Morrison announced the plan after national cabinet, at the end of a week that has seen brawling over his encouragement for younger people to take AstraZeneca, despite mixed health advice.

He denied his Monday comments had been inconsistent with the official advice.

Under the plan, the country is presently in phase one – dubbed “vaccinate, prepare and pilot” – when the strategy is to “continue to suppress the virus for the purpose of minimising community transmission”.

The plan has been agreed to “in principle” by the states and territories. But given they have the power over lockdowns and other restrictions, they won’t be bound by its specifics. Also the stages contain menus of measures rather than hard-and-fast commitments.

The “post vaccination” second phase would “seek to minimise serious illness, hospitalisation and fatality” from COVID

The Prime Minister said national cabinet had agreed on a “mind-set change”.

“Our mind-set on managing COVID-19 has to change once you move from pre-vaccination to post-vaccination. That’s the deal for Australians,” said Morrison, who is just out of quarantine after his overseas trip.

The plan says measures in the second phase may include easing restrictions on vaccinated residents, such as lockdowns and border controls. There would be lockdowns only in extreme circumstances to prevent escalating hospitalisations and deaths.

Capped entry of student and economic visa holders would be allowed, subject to quarantine arrangements.

The third – “consolidation” – phase would see COVID-19 managed like the public health management of other infectious diseases. There would be no lockdowns and restrictions would be lifted for outbound travellers who were vaccinated. Stage four would bring a final loosening.

There are not indicative timetables for the last two phases to start.

The plan is largely a work-in-progress, as is the vexed rollout, but Morrison hopes it will help drive the jabs, and provide him with some political cover.

View from The Hill: COVID transition plan has bad news for returning travellers