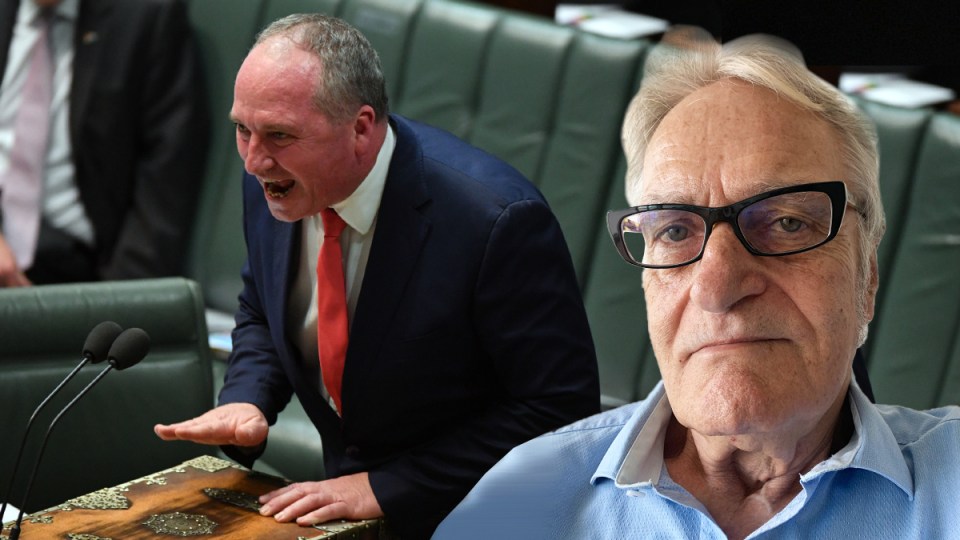 Lester Maddox was a controversy-magnet who served as the Governor of Georgia in the United States and made a bid for the American presidency in 1976. He was a figure of ridicule in that part of the US probably considered as “woke” these days.

Maddox might have had a slow Southern drawl but he was never caught napping.

He was described as a “shrewd, folksy self-made man with a talent for public relations”. This might have an echo in Australian politics during the week Barnaby Joyce returned to the Nationals’ leadership and as Deputy Prime Minister.

Thinking of Maddox’s political career and Joyce’s return, an instructive touchstone is the song Rednecks by award winning songwriter and lyricist Randy Newman, included on his 1974 album Good Old Boys.

Here’s most of the opening stanza:

Plenty of Newman’s songs might not pass the politically correct test these days (check out the lyrics to the 183cm songwriter’s Short People) but his sharp jab at the hypocrisy of liberal America is worth keeping in mind when considering Joyce’s return and how it might play out.

Is Joyce a 2021 version of the 1970s Maddox? Could be and, if he is, this could be of great political import and consequence, not just for the Morrison government but for Anthony Albanese and Labor. Perhaps more so for the latter.

Looking back on the week, the orthodoxy in the faculty lounge where many politicians and commentators in Canberra hang out paints the return of Joyce as bad for the government, good for Labor and perhaps even a game-changer.

As they say outside those faculty lounges, not so fast, Kemosabe.

Joyce is a popular, effective and quickly recognisable politician. He might attract sniggers in King Street, Newtown, or Gertrude Street, Fitzroy, but he’s cheered in the main streets and byways in Central Queensland, the Hunter region and dozens of towns from southwest WA to Tasmanian regions as well as bush communities in between.

Labor running around with its collective hair on fire over Joyce’s return risks repeating the mistakes made by the Left during the 2019 election campaign, when the Greens thought it was a bright idea to take a gratuitous convoy to Clermont, west of Rockhampton, and tell locals how to live their lives.

There are two reasons for this. By jumping at Joyce’s shadow, Labor is fighting on the Coalition’s territory. After two years, Labor has failed comprehensively to produce any answer to the terse and tidy framing of the climate and energy debate under the banner of “technology not taxes”.

If they can’t come up with an answer, in political or policy terms, to this facile phrase in two years, they aren’t going to do it in two months.

This is why Labor is on thin ice, and they appear to be thinking of dancing. If they miss their mark, they’ll score an own goal, making Joyce a figure of sympathy who’s being attacked for sticking up for regional and rural Australia and the hi-viz workers who spin around in their crew-cab monster utes. He might be a fool, but he’s their fool.

Of course, Labor might hit the target and expose the hollow, self-interested mission upon which Joyce has embarked. He can get away with his weatherboard-and-iron confection but any honest assessment of what’s driving him says it starts, continues and finishes with naked ambition and revenge.

Pinning this on Joyce takes time. When he was last deputy prime minister, it took two years before the facade fell away and the real, unattractive Barnaby overwhelmed the spin and bluster.

At the moment, the Coalition only needs to keep Barnaby upright and fighting for two to four months, all that’s needed to get to an election, now all but certainly being held not just this year but before the November climate conference in Glasgow.

Joyce can continue to mix his populism on climate beyond Glasgow but it makes it easier for Scott Morrison to play his weasel words, “both sides” argument from Malvern to Middlemount if he contains the argument to the months prior to the UN conference.

Qualitative research by the political parties suggests Morrison is always a campfire ahead of the posse. Recent political developments have seen the posse get closer and the campfires grow bigger. The reckoning looms although the election will head it off for now.

Those who doubt Joyce’s ability to bluster an argument – very much in the style of Lester Maddox – should revisit the lamb roast brouhaha of 2009.

That’s when Joyce first campaigned against action on climate change, saying it would be “the end of Australia’s sheep industry” and “working mothers are (not) going to be very happy when they are paying over $100 for a roast’’.

It didn’t happen and was ruled as false by fact checkers, but it did the trick. It cost Malcolm Turnbull the Liberal leadership in 2009, was in the mix of reasons Kevin Rudd imploded and helped blow up Julia Gillard’s time at the top.

If you want to hear how Joyce and sidekick Matt Canavan are going to change the script, listen to the Queensland senator speaking with Fran Kelly on Thursday.

Now it seems we shouldn’t act on climate because we can’t trust China. – clever scare ’em politics pushing two buttons at once.

No wonder Morrison quite likes him. He can ride shotgun as they seek to outrun the posse.

Dennis Atkins: Why Barnaby Joyce’s return to leadership could spell trouble for Labor