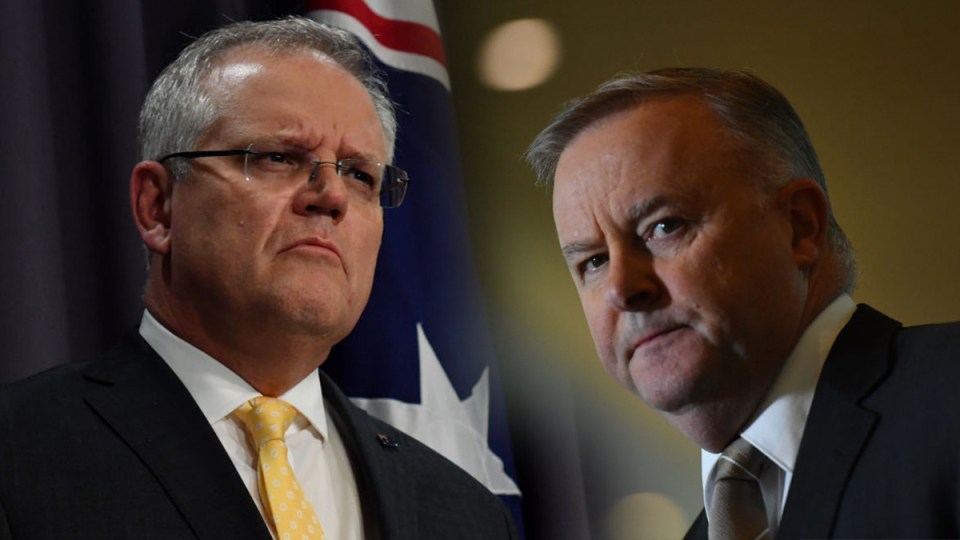 Canberra is abuzz with speculation over an early election. Photo: AAP/Getty
analysis

The government is keeping tight-lipped but Josh Frydenberg’s federal budget has only heightened talk of an early election, with Canberra abuzz after the Treasurer’s 2021-22 plan went some way to cauterising old wounds of the Coalition’s own making.

Whisperings about a late 2021 poll have only increased after the government looked to pile pressure back on Anthony Albanese’s Labor, picking a fight with the opposition over their position on legislated tax cuts for high-income earners.

While some, including The New Daily columnist Dennis Atkins, predict an October election, much of the talk in Canberra is centring around a November poll.

“There’s a cloud that hangs over lower taxes for Australia and that cloud is Anthony Albanese,” finance minister Simon Birmingham said on Thursday, hours before the Labor leader gave his budget reply speech in Parliament.

Mr Frydenberg’s budget was jokingly referred to as the “Hot Chocolate” budget on Tuesday night – as in, “everyone’s a winner”. The New Daily called it Mr Frydenberg’s “fix-it” budget, as he set out to bandage the government’s bleeding wounds and neutralise looming political fights on topics from aged care and childcare to gender equality and women’s safety.

Labor’s shadow treasurer Jim Chalmers called it “a shameless political fix … to try and get them through an election”. The Greens called it “scattergun”.

But after the budget this week, several senior sources in both Labor and the Greens said they were now shifting predictions on when an election could be, saying they were leaning towards expecting a poll around November.

Central to the government’s pitch in Tuesday’s budget was the continuation of the low and middle income tax offset (LAMITO), which deferred again a scheduled tax rise for millions of Australians.

The Coalition’s attack lines since then seem to hint the government wants to set up an election fight based on tax.

Senator Birmingham called a rare press conference of his own on Thursday, for the sole purpose of criticising the opposition for not committing to backing the government’s ‘stage three’ tax cuts, due in 2024, which will overwhelmingly benefit higher-income earners.

Labor voted against stage three of the tax cuts in 2018, and Mr Albanese said he would consider the opposition’s position again before the next election, but has not made that clear yet.

“The Australian people had this choice at the last election. They voted for lower taxes then. Labor should heed that message and Anthony Albanese should come clean, whether he has a high-taxing agenda,” Senator Birmingham said in Canberra on Thursday afternoon.

He called a second press conference at 8.30pm that night, after Mr Albanese’s budget reply speech, claiming it was “empty” and, again, that “Labor is keeping the door open to higher taxes”.

In Question Time on Thursday, Mr Frydenberg repeatedly attacked Labor with claims the opposition would enact “higher taxes”, and claimed Australians “are waiting on the verdict of the Leader of the Opposition” on stage three.

Senator Birmingham was asked by a journalist why Mr Albanese needed to “come clean” right now, with the reporter questioning, “Isn’t there going to be another budget before the next election?”

“But what’s the rush? Unless there isn’t any more budgets before the election?” the reporter asked again.

Senator Birmingham wouldn’t rule it out.

Prime Minister Scott Morrison has repeatedly referred to himself as a “full-termer”, and said on multiple occasions this week “the election is next year” when asked about his plans to go to the polls again.

But Commonwealth laws give Mr Morrison the power to call a federal election at any time between August 2021 and May 2022.

Talk that a November poll was on the cards had previously been bandied about at the start of 2021, when the government anticipated completion of the COVID vaccine program in October. Hitting that goal just before a national election was seen as the ultimate election ace-in-the-hole.

But, of course, a rolling series of scandals around Brittany Higgins, Christian Porter and sexual misconduct in and around politics, combined with huge blowouts in the projections for vaccination completion, saw that November 2021 talk soon dry up. It was followed by Labor hitting the lead in the Newspoll in March, for the first time in a year, and a crash in Mr Morrison’s personal approval ratings.

However, latest polls have seen a slight recovery in both numbers,

Nobody is locking in their predictions just yet, but senior members of non-government parties say they are more alive to the possibility of an early election now than they were last week.

“The election is next year. If they go earlier, it will be because they think things are going to get worse,” Mr Albanese claimed.

The Labor leader’s Thursday budget reply speech locked in more of the opposition’s key policy promises around housing and jobs. It was a speech with a clear eye on the next poll, with Mr Albanese explicitly saying he was “seeking the honour of serving as your Prime Minister”.

Borrowing a sporting metaphor, Mr Albanese has previously told colleagues that his budget reply speech would represent “the final quarter” and claimed Labor would be “kicking with the wind” in the lead-up to the next election.