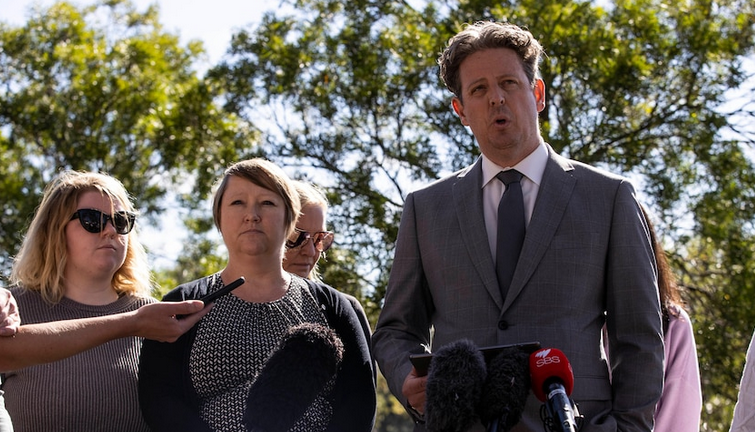 Ben McGregor has threatened legal action against party leader Rebecca White over her comments after he resigned as a candidate. Photo: ABC/Luke Bowden)

A former colleague of the Tasmanian Labor president alleges he called her a “c***” and sent her a photo of a penis when she declined his invitation to the pub.

The woman has spoken through her lawyer days after Ben McGregor resigned his candidacy from Clark while under pressure from Labor leader Rebecca White over the seven-year-old texts.

Mr McGregor has since threatened Ms White with defamation action over comments she made after his resignation.

The woman, who has asked for her identity to remain confidential, made the allegations in a statutory declaration given to Tasmanian Labor secretary Stuart Benson on April 4.

She said the texts were inappropriate and she wanted to speak out, given Mr McGregor’s public profile.

She said she was detailing the texts now to support Ms White, who she described as “a person of great integrity”.

In her statement, she said she was on maternity leave when she received the texts from Mr McGregor asking her to join him and others for a drink.

“When I declined, also pointing out I was at home with a young baby, he sent me a vile and graphic image of a penis with testes also evident,” the woman said in her statement.

“I also received a text where he called me a c***, continuing to tell me to join him at the pub for drinks.

“I expressed my disgust and anger to him about this via text, and later in person when I returned to work.”

Speaking at a press conference on Wednesday, Mr McGregor said the texts were sent in jest and his wife was by his side when he sent them.

He said he had repeatedly apologised for their contents and said the woman had gone on to campaign for him when he ran for the seat of Clark in the 2019 federal election.

Through a spokesman, he declined to make further comment on the matter.

The woman, who worked in the public service with Mr McGregor, said she was willing to produce the texts in court if needed.