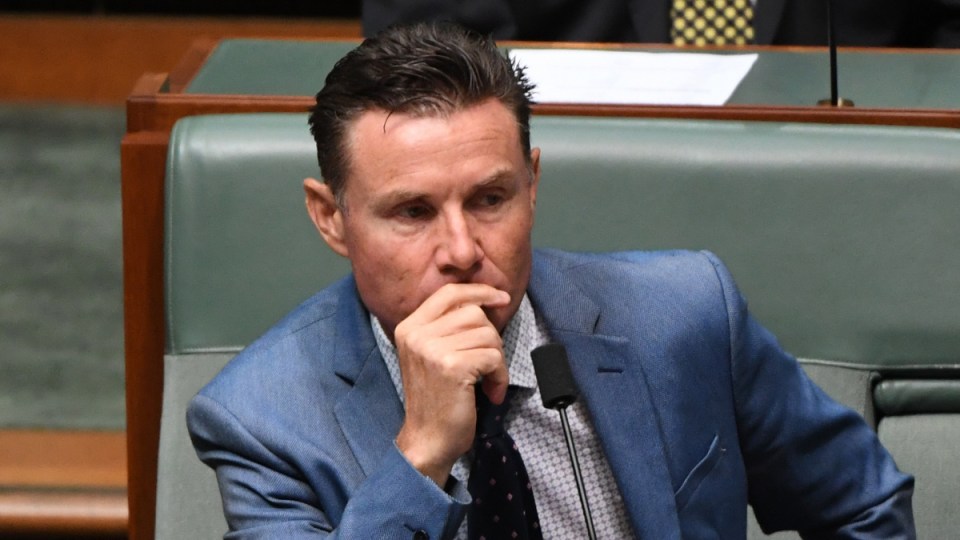 Dr Laming is accused of taking an inappropriate photograph of a woman while she was bending over, as well as harassing female constituents.

The woman involved in the upskirting photo spoke to police on Monday, and on Tuesday lodged a formal complaint.

The complaint will be assessed by police.

He compared the circumstances to inappropriate behaviour in NSW, where the Premier and Deputy Premier have punted the MP involved from the Coalition.

“It’s pretty obvious that he should be sitting on the cross bench,” Mr Turnbull said of Dr Laming.

“His behaviour is so out of order.”

Mr Morrison is resisting pressure to expel the disgraced backbencher because it would plunge the Coalition into minority government.

Dr Laming has not denied taking the 2019 photo of the woman as she bent over at work with her underwear exposed.

He maintains there was nothing untoward in the snap and defended his abhorrent behaviour in a radio interview on Monday.

He said the photograph was of the kneeling woman in a “completely dignified” position, and that his years-long abuse of at least two constituents had been “reinvented” as harassment.

Dr Laming said sorry in parliament for the online abuse, but later shrugged off the apology.

The 54-year-old has been given a month’s paid medical leave to seek counselling and empathy training.

He intends to rejoin the Coalition party room upon his return and remain in parliament until the next federal election.

New Home Affairs Minister Karen Andrews said Dr Laming’s behaviour was unacceptable and could not be rationalised or covered up.

But, while admitting Dr Laming had shown no contrition, she remained willing to accept him back into the Coalition party room.

“He is a member of the Liberal National Party, he is also the elected member for Bowman,” Ms Andrews told ABC radio on Tuesday.

Challenged on whether Dr Laming could sit on the cross bench instead, Ms Andrews said: “He could probably do a lot of things.”

“The strongest signal that he’s given is that he’s not going to recontest the election,” she said.

“I hope it shows to others who would seek to engage in this sort of activity that it is completely unacceptable and that it must change,” she told Nine.

“Once again the Coalition is effectively a minority government,” the former opposition leader told the party’s online national conference.

“One more scandal, one more boneheaded disgrace, one more backbench troll sent off to study how to impersonate being a human being and Morrison will have lost control of the government altogether.”

Opposition Leader Anthony Albanese said Dr Laming should not wait until the next election to resign.

“Andrew Laming should go from federal parliament, let alone continue to sit for the next year in the Liberal party room,” he told the ABC.