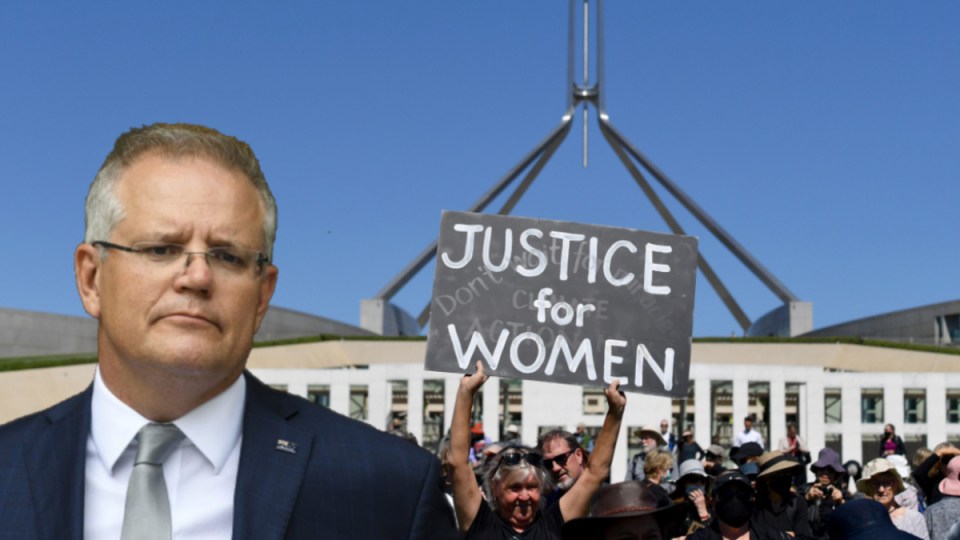 The PM stayed inside as women and allies gathered on the lawns of Parliament House last Monday.

The organisers of Monday’s women’s rally outside Parliament House have hit back at a Liberal MP’s claim that Prime Minister Scott Morrison couldn’t attend the march because of security issues.

“He is the Prime Minister of the country and there are security issues around those sorts of issues, about him going into big crowds,” Mr Falinski said.

But organisers of the protest have hit back, stressing it was a safe space and that the invitation to attend had been extended across the political spectrum.

“The marches were inclusive, respectful, and kindness was present. When members of parliament and senators joined the Canberra crowd we welcomed them with cheers and applause,” Ms Hendry said.

Both Mr Morrison and Minister for Women Marise Payne refused to attend the march, instead inviting the organisers to a private meeting.

Their offer was rejected before the rally on Monday morning, with Ms Hendry insisting the leaders should come out and recognise the thousands of attendees.

“We have already come to the front door, now it’s up to the government to cross the threshold and come to us,” Ms Hendry said. “We will not be meeting behind closed doors.”

A large contingent of MPs and staffers across the political spectrum, including  Labor leader Anthony Albanese, came out and joined the march.

TND contacted the PM’s office about Mr Falinski’s claims but did not receive a response before deadline.

Senior lecturer in politics at the Australian National University Maria Maley said Mr Falinski’s comments showed the government was trying to spin a new narrative on why he didn’t attend the protests.

“The government is desperately trying to change the narrative about what happened with the PM not attending or meeting the marchers,” Dr Maley said.

“What that implies though, is that the women who were gathering to raise these issues were posing a threat to him.

“It puts him in the position of victim.”

In the past week many commentators, including the ABC’s Laura Tingle, have juxtaposed Mr Morrison’s response to that of former PM John Howard, who fronted a crowd of angry pro-gun demonstrators in 1996 following the Port Arthur Massacre.

Mr Howard had travelled to Gippsland to address gun owners enraged by his far-reaching gun-control reforms.

Mr Howard wore a bulletproof vest because the AFP stressed there was a serious threat to his life, but after his speech walked amongst the crowd and chatted with the protestors.

Mr Howard’s appearance is held up as a classic show of leadership in Australian political history – and a far cry from what Mr Morrison didn’t do on Monday, said Dr Maley.

“By staying in Parliament House and not coming out it says you just want to remain in the house where men dominate, where there is male privilege and women aren’t treated well.

“You want to hide and not come out.”