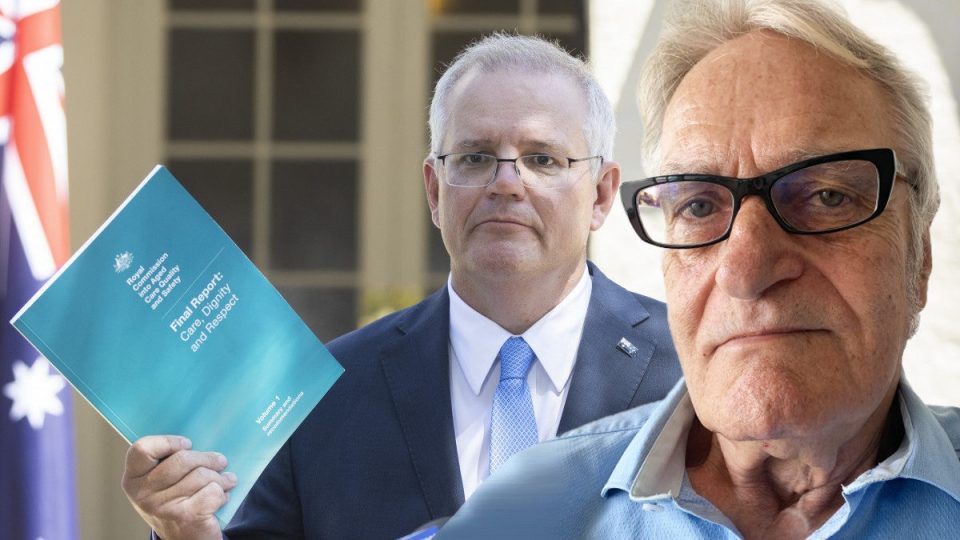 It sounds absurd but there’s a compelling case that Scott Morrison has a ‘don’t know, don’t tell’ policy with himself.

Watching him grapple with the diabolical policy, political and ethical issues of sexual crime and misbehaviour and the lack of care for Australians in aged care, some shocking conclusions are hard to escape.

Morrison is incurious in a wilful way, forcing himself to compartmentalise inconvenient and uncomfortable events and information.

This was on full display in his handling of the Brittany Higgins and Christian Porter matters.

Ministers and staff, in his office and elsewhere, didn’t feel inclined to pass on details of Brittany Higgins’ alleged sexual assault, now under investigation by the federal police. Morrison was very annoyed when he was caught out not knowing – but it seemed the “caught out” was key.

The events surrounding the Porter allegations are even more telling.

A letter with a detailed dossier compiled by the victim attached was sent to the Prime Minister’s office and he had a “briefing” on its contents.

He didn’t feel it necessary to read the material. Is this a chief executive in whom you’d have confidence?

The fundamental questions of public life and journalism – who, what, why, when, where and how – don’t seem to enter the Morrison mind unless he can’t avoid facing them.

At the same time, he’s vigorously intent on avoiding hard decisions and difficult choices. He’s on a perpetual catch-up hamster wheel.
All this plays out in a carefully constructed Make Believe Land where Morrison is none of the above.

In the Morrison Bubble, he is brave, bold, decisive, on top of the most wicked problems and capable of confronting and conquering all before him. It’s all a sham.

On aged care, Morrison picked it up as something on which to stamp his leadership after his dark arts victory over Malcolm Turnbull.

Confronted by a damning Four Corners report on aged care policy failure, aired just three weeks after he became Prime Minister, Morrison reached for a device he’d used and avoided as minister – he ordered an inquiry, in this case a royal commission.

While the process becomes action – and is used as cover for any unwelcome revelations along the way – it is a dramatic use of one of the oldest plays in the Politics 101 primer, “kicking the can down the road”.

The big kick was seen this week when Morrison and his two ministers, Greg Hunt and Richard Colbeck, strolled out of Kirribilli House on Sydney Harbour.

The damning findings – a comprehensive failure of policy, a massive funding underspend and shocking revelations such as the fact that two in three Australians in care were malnourished or in danger of malnourishment – were rolled into a facade of action.

A pittance (less than 5 per cent of what’s recommended) was allocated and an unspecific promise of further funds and policy reform in May’s Budget was shoved in the can before being kicked along.

Morrison’s use of the initial book of the eight-volume report – a 320-plus page summary and recommendations – was a masterclass of the Prime Minister’s now predictable and usually successful rinse, spin and repeat approach to public administration.

The other seven volumes were only available to the media after the news conference (or online), including about 1400 pages in two books describing the “new system”.

The fact the royal commissioners were split on a couple of basic policy options was leaked to the media and used as tactical cover to avoid any meaningful discussion of the way ahead.

Circumvent real explanation, pop everything back in the can and kick it even further down the road.

The transcript of the Morrison aged care report release event is testament to a determination to get away with doing the minimum in order to meet the most basic of requirements – something that was a central criticism of the royal commissioners.

After a 3500-word salad from Morrison, Hunt and Colbeck – during which the Prime Minister and his Health Minister felt it necessary to note their fathers had died while in the aged care system – there was an at times combative to and fro with journalists.

Morrison didn’t seem to know a persistent interlocuteur was Anne Connolly from the ABC’s investigative unit and the senior journalist behind the Four Corners report in September 2018.

When Connolly called out Morrison’s clever media tricks – giving out just one volume just prior to the news conference – by asking whether it was a “spin tactic”, the Prime Minister flicked the switch to indignant.

“No, with great respect, this report is not about the media,” said Morrison.

Of course, he’s had little to say about aged care since.

He minimised his public appearances and when he has faced a few questions the dominant topic has been just as unwelcome, sexual assault, ministerial behaviour, accountability and honesty.

It has been quite a week and there may be at some time consequences but probably not yet. Not while people are waiting for and wanting vaccinations against COVID-19.

Also, what Morrison hasn’t told himself, he doesn’t need to worry about.
He’s said a couple of times that he really doesn’t care what people think about him, itself a mind-snapping example of self-belief or an oversized untruth.

“I’ve really learned not to care; and I really don’t that much,” Morrison told the ABC’s Annabel Crabb before he became prime minister.

In January 2020, after his bumbling response to the climate change bushfire national disaster, he remarked to 3AW’s Neil Mitchell that he doesn’t take “these things personally. Why would I?”

This denial of any humanity beyond the Morrison bubble must be of great comfort in weeks like the few we’ve just endured.