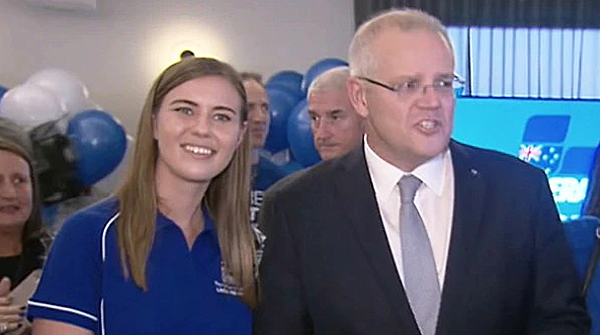 Brittany Higgins has called for her alleged rapist to face the ‘full force of the law’ after making a formal complaint to police.

On Friday evening the former Liberal staffer released a statement saying she had instigated Australian Federal Police proceedings against the man she claims raped her in Morrison government Defence Minister Linda Reynolds‘ office.

Ms Higgins called for a “truly independent investigation” and systemic change in parliament.

“Firstly, I want a comprehensive police investigation into what happened to me on 22/23 March 2019 and for my perpetrator to face the full force of the law,” she said.

“Secondly, given my experience, I am determined to drive significant reform in the way the Australian Parliament handles issues of this nature and treats ministerial and parliamentary staff more generally.”

Ms Higgins said that “getting to the bottom of what happened to me and how the system failed me is critical to creating a new framework for political staff that ensures genuine cultural change and restores the trust of staff,” Ms Higgins said.

“In addition to an independent investigation into what happened to me, I demand a significant review into the conditions under which ministerial and parliamentary staff are employed and how we can do better,” she said.

“They are not public servants and work in an extremely high-pressure environment. Too often, a toxic workplace culture can emerge that enables inappropriate conduct and this is exacerbated by the disparity in the power dynamics.”

Ms Higgins said the issue of how parliamentary staff are treated was a “bipartisan issue that impacts staff from across the political spectrum and must be treated as such”.

She also called out Prime Minister Scott Morrison saying “I don’t believe that agency was provided to me over the past two years but I seize it now and have advised the Prime Minister’s Office that I expect a voice in framing the scope and terms of reference for a new and significant review into the conditions for all ministerial and parliamentary staff.”

“It is important that the reform is real and drives change beyond dealing with just what happened to me, and how the system let me down,” Ms Higgins said.

Explosive text messages have cast serious doubt over when the prime minister’s office first knew about the alleged rape of a Liberal staffer.

Brittany Higgins says she was sexually assaulted by a male colleague inside Parliament House in 2019.

Scott Morrison claims his office did not find out about the alleged rape until last week and he was not informed until Monday.

But a text message exchange between Ms Higgins and a fellow Liberal staffer within a fortnight of the incident calls this account into question. In the message, the Liberal staffer said he had spoken directly with a member of Mr Morrison’s staff.

“Spoke to PMO. He was mortified to hear about it and how things have been handled,” he said.

“He’s going to discuss with COS – no one else. I flagged need for councillor (sic) and desire to be closer to home during election.”

PMO refers to the prime minister’s office and COS is shorthand for chief of staff.

The Prime Minister is standing by his timeline, despite Ms Higgins saying at least three of his staff had prior knowledge of the incident.

While the messages appear to confirm her account, Mr Morrison wants the nation’s top public servant to review communication records.

“If there was anything different here, I would like to know,” he told reporters in Sydney on Friday.

“I want to know and that is why I have asked the secretary of my department to actually test that advice that I received.”

Mr Morrison denied he had misled the public and maintains he is horrified by the allegations.

“It’s just incomprehensible that the Prime Minister’s Office, given a reported sexual assault had occurred 50 metres from his office, wouldn’t have then had a discussion about handling the issue,” he told the ABC.

“It just doesn’t stack up.”

Mr Albanese said Ms Higgins deserved straight answers about who knew what and when.

“I believe Brittany Higgins when it comes to the incident and tragedy.”

Home Affairs Minister Peter Dutton said the Prime Minister’s public statements on the timeline were based on advice from his staff.

“If he has been misled then that is a different level for him to deal with,” Mr Dutton told Nine.

“But on the advice he has received during the week, and as he said in parliament, that’s the facts as he knows them. To be reasonable, he can only report the facts as he’s advised by his staff.”

Greens senator Larissa Waters is not satisfied by an internal review into the text messages, and will push for a public inquiry into the alleged rape and response when parliament resumes next week.

“We need an independent review, which has public findings,” she said.