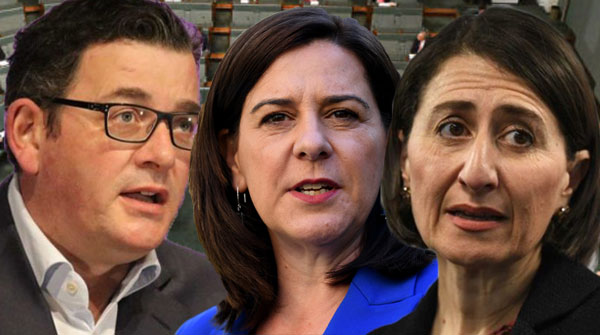 Australian politics is in a state of turmoil with the leaders of the nation’s two biggest states facing votes of no confidence in parliament and the Queensland election in chaos.

On Tuesday, NSW Labor will move a motion of no confidence in Premier Gladys Berejiklian in parliament that will fail without the support of government MPs, who have so far united behind her.

Victorian Premier Daniel Andrews is also expected to face a no-confidence motion in parliament over his handling of the state’s coronavirus second wave.

In Queensland, the Liberal National Party has denied reports that leader Deb Frecklington was referred to the electoral commission over concerns about her fundraising events involving property developers.

Senior federal and state Liberal MPs are rallying around Ms Berejiklian after revelations she was in a “close relationship” with an ex-MP being investigated for corruption.

The relationship, uncovered at the NSW Independent Commission Against Corruption on Monday, sent shock waves through coalition government ranks with MPs blindsided over her connection with disgraced former Wagga Wagga MP Daryl Maguire.

“I stuffed up in my personal life,” Ms Berejiklian said at a 4.30pm press conference on Monday after her appearance at the hearing.

“Had I known then what I know now, clearly I would not have made those personal decisions.”

The Victorian Liberals and Nationals are urging Labor MPs to cross the floor and support their no-confidence motion against Mr Andrews.

Mr O’Brien said it was “quite clear” that privately many Labor MPs were critical of the government.

The motion came as Victoria record 12 new COVID-19 infections and one new death on Tuesday. Of those, two were linked to known outbreaks, nine are provisionally linked and one is thought to be a false positive.

Mr Andrews’ top public servant, Chris Eccles, resigned on Monday after phone records revealed he spoke to the head of police as the state’s hotel quarantine program was hastily set up on March 27.

Mr Eccles was the second public official to quit amid an inquiry into the botched program, believed to be responsible for the state’s second wave of COVID-19. Former health minister Jenny Mikakos resigned in September.

The ABC reported on Tuesday that Ms Frecklington, the LNP leader and Queensland election hopeful, had been referred to the electoral commission by her own party over a series of fundraisers involving property developers.

The state’s LNP denied the claim.

“Deb Frecklington has not been referred to the ECQ,” an LNP spokesman said.

The report comes just weeks out from the October 31 state election.

The Queensland Labor government banned donations from property developers in 2018.

Under Queensland law, parties or politicians who accept property developer donations face fines of up to $52,220, or two years in prison.

“Why hasn’t she been open with Queenslanders?” they said.