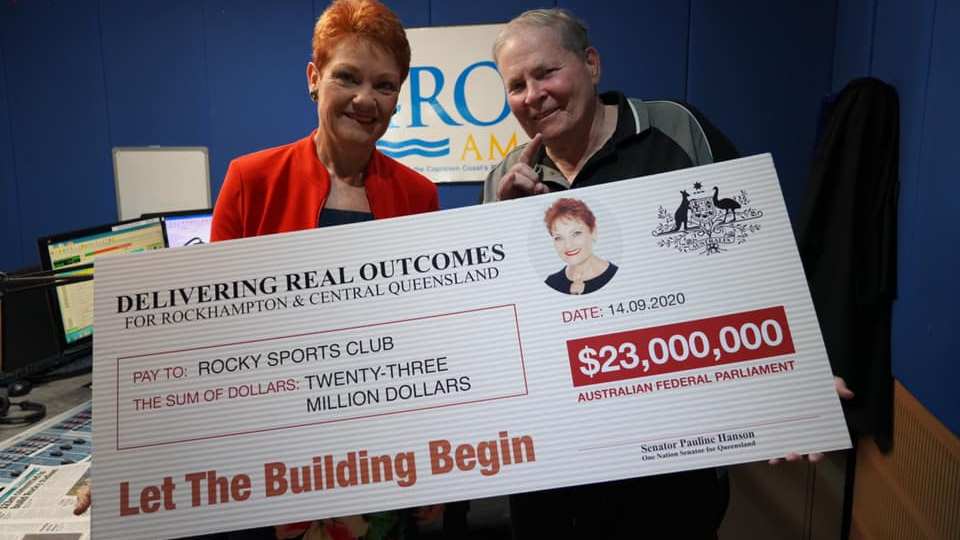 The auditor-general is considering a request to investigate how One Nation leader Pauline Hanson was involved in a federal funding announcement for a new stadium in central Queensland.

However, the sitting state Labor MP for Rockhampton Barry O’Rourke wasn’t invited to the event.

In a Facebook post, Senator Hanson said she had “secured $23 million from the federal government that will green-light the long-awaited Rocky Stadium”.

“This has taken almost two years to get the funding across the line, but following a dinner with the Prime Minister and Finance Minister Mathias Cormann last September, the project has been on their radar and I haven’t let up,” she wrote.

But Labor Senator Murray Watt accused One Nation and the LNP of using federal government grants as part of their campaign for the Queensland state election on October 31.

He has written to the Australian National Audit Office asking it to investigate the conduct of Sports Minister Richard Colbeck and Infrastructure Minister and Deputy Prime Minister Michael McCormack in awarding the grant.

Senator Watt said the novelty cheque looked as it had been issued by Senator Hanson and the “Australian federal parliament”.

“It is completely inappropriate for Senator Hanson to treat taxpayers’ money as if it were her own, and to mislead Australians about the true source of these funds,” Senator Watt told The Guardian.

“Taxpayers’ money should not be treated as campaign contributions to, or as gifts from, individual politicians or political parties.”

Senator Watt said the One Nation leader’s cheque was “reminiscent of the circumstances surrounding Ms Georgina Downer’s presentation of a cheque to the Yankalilla Bowling Club in March 2019”.

The auditor-general has also been asked to probe the assessment process for the grant.

“This request is under consideration and the response will be published,” the auditor-general said in a statement on the ANAO website on Tuesday.

Elsewhere, businessman Clive Palmer has called for police to investigate the Australian Electoral Commission over media reports that his United Australia Party is being probed for having less than the 500 required members.

The Electoral Commission of Queensland is not planning to investigate UAP and Mr Palmer said that was because his party had thousands of members.

He said there was no truth in the leak and called on the chief electoral officer to find out who was responsible for the “undemocratic” leaks.

“The problem is that there are too many lefties in the AEC. They are not loyal Australians,” Mr Palmer said.