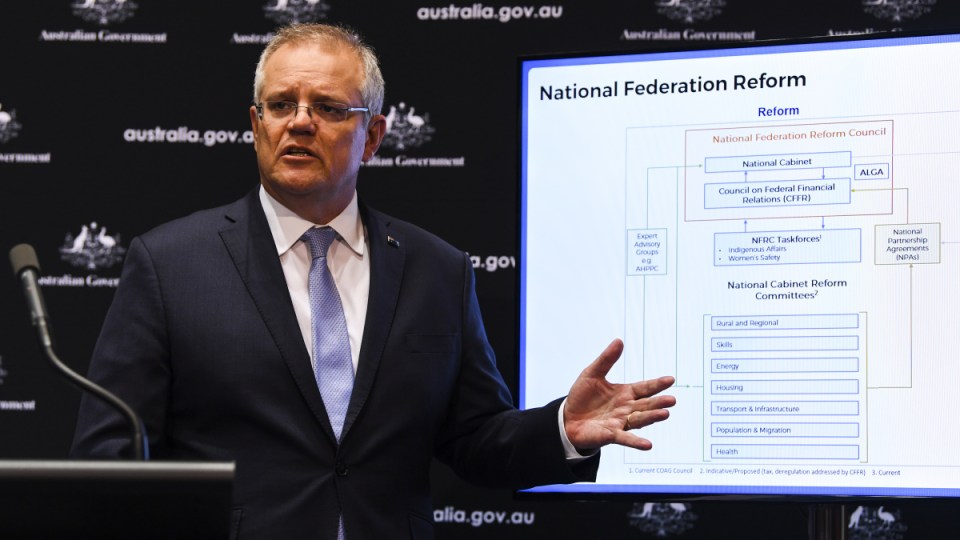 States and territories have agreed to dump COAG and replace it with a permanent National Cabinet, which will have a “job-making agenda” as the country continues through the easing of coronavirus restrictions.

“COAG is no more. It will be replaced by a completely new system – and that new system is focused on the success that has been yielded by the operation of the National Cabinet,” Prime Minister Scott Morrison said on Friday.

The announcement of the shake-up to federation came as it was revealed that just two coronavirus patients remained on ventilators in Australian hospitals on Friday.

COAG (the Council of Australian Governments) has been the country’s peak intergovernmental body since 1992. It is made up of the PM, state and territory first ministers and premiers and the president of the Australian Local Government Association, and usually meets twice a year.

The decision to dump it was made at the first meeting of the National Cabinet – the grouping of state and territory leaders set up to manage the response to the coronavirus – in a fortnight.

Mr Morrison said on Friday the group would continue to meet every two weeks while the COVID-19 outbreak lasted. It would meet monthly from then.

“The National Cabinet will be driven by a singular agenda, and that is to create jobs. It will have a job-making agenda,” he said.

“The National Cabinet will drive the reform process between state and federal cooperation to drive jobs.”

Mr Morrison said Australia was making much faster progress against the pandemic than “we could ever have imagined”. All states and territories had started to reopen after coronavirus lockdowns.

“We still have an enormous amount of work to do in the months that are ahead. And that is to both manage, as always, and suppress, the virus, and to ensure that we can reopen our economy,” he said.

“It will be a week or two before we can see Australians move out of their homes, go back into workplaces and slowly go into playgrounds and schools – all things they have been looking forward to doing for so long.

“But the impact of that on the health results – it will still take several weeks before we have a full assessment of that.”

Mr Morrison said eradicating the coronavirus in Australia had never been a goal for the nation’s leaders.

“But the fact that a case or a group of cases may present is not something that should restrict moving ahead and getting progress on implementing the three-step plan and bringing Australia’s economy back to a COVID-safe environment,” he said.

“The risk remains great and always has been. Australia’s success can lead some to think that perhaps the risk was never there in the first place? But that is not true.”

Chief health officer Brendan Murphy said Australia was reporting fewer than 20 new coronavirus cases each day. Across the country, only two patients were on ventilators – “a long way short of the 7000
potential that we catered for in the worse-case scenario”, he said.

Professor Murphy said he had presented National Cabinet with a report on the effects of easing virus restrictions across the country. But it had limited data, because most of the relaxations were still new.

“It is too early to draw definitive conclusions but we are on track,” he said.

Professor Murphy said health authorities would keep a close eye on the emerging figures to make sure small, expected outbreaks of COVID-19 did not turn into larger, out-of-control clusters.

‘COAG is no more’: Scott Morrison shakes up post-virus Australia