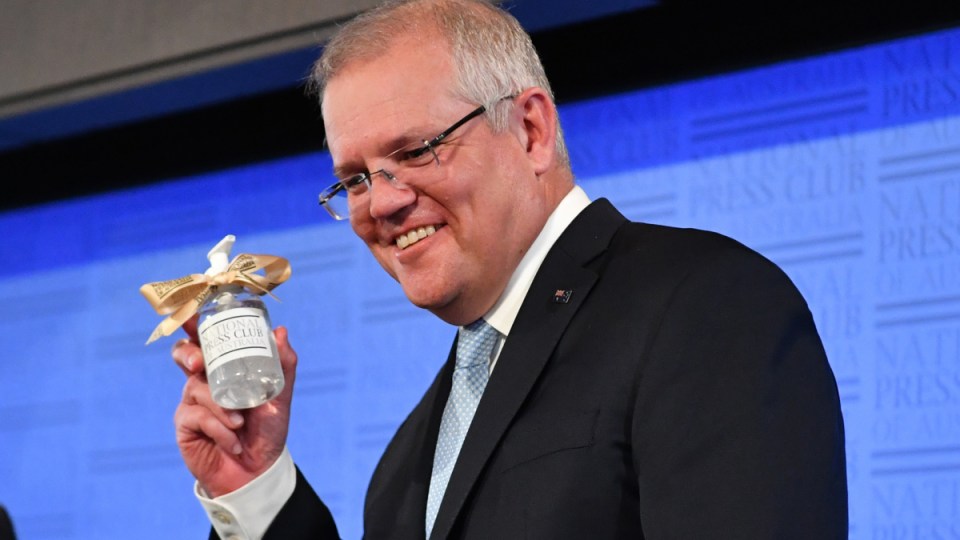 Prime Minister Scott Morrison says the government will shelve contentious “union-busting” laws as a sign of good faith, while pointing towards an overhaul of Australia’s industrial relations system.

Mr Morrison used a speech to the National Press Club on Tuesday to announce Industrial Relations Minister Christian Porter would lead a process bringing together unions, employer groups and businesses to try to change the current system, which he said was “not fit for purpose”.

“It is a system that has, to date, retreated to tribalism, conflict, and ideological posturing,” he said.

“No side of that debate has been immune from those maladies.”

The government’s most recent attempt to crack down on what it sees at union misconduct has been stuck in the Senate after failing to get crossbench support last year.

Mr Morrison confirmed the government would not seek to take the bill to a second vote, saying the legislation was being shelved in a sign of “good faith.”

The changes would have allowed for applications to be made to the Federal Court to deregister a union or union official if conduct was deemed inappropriate.

“In good faith, we have decided the government will not pursue a further vote in the Senate on its Ensuring Integrity Bill,” he said.

“Not pursuing a further vote, though, I hasten to caution on this bill, does not reflect any change or lack of commitment to the principle that lawful behaviour of registered organisations should be strictly required on all work sites in Australia.”

Mr Porter will chair five working groups between now and September to try to reach a consensus with unions and employers on industrial relations.

The Prime Minister said he was heartened by the “constructive” approach unions and employers took during the height of the coronavirus pandemic and that the economic recovery presented an opportunity for major change.

“The extent of the damage wrought by COVID-19 on the Australian economy, and the enormity of the challenge we now face to get Australians back into jobs, means the policy priorities for recovery will be different to those in place before the crisis,” he said.

“We now have a shared opportunity to fix systemic problems and to realise gains as a matter of urgency to get more people back into work.”

Mr Morrison’s announcement drew comparisons with the historic Prices and Incomes Accord struck between former prime minister Bob Hawke and unions in the early 1980s.

“We need people to get together and sort this stuff out. As I say, they’ve been caught in grooves for too long, and grooves going in parallel lines and not coming together.

“And that’s why I’m hoping this process will achieve. It may succeed. It may fail. But I can assure you, we’re going to give it everything we can.”

“Australian unions want to see a better, stronger and fairer Australia and that’s why we will take up the opportunity to sit down with employers and with the government to discuss that,” she said.

Ms McManus said the ACTU would measure any proposed changes by whether they gave workers better job security and a greater share of the nation’s wealth.

“Pre-pandemic we’ve had some serious issues with this – wage growth was at record lows, enterprise bargaining was failing, we were seeing less and less enterprise agreements,” she said.

“We want to turn that around.”

“Sure it’s a good thing to get people around the table, but I can tell you there’s a lot more to industrial relations than simply booking the room,” he said.

“The idea that a Liberal government is about to engage in industrial relations reform will send a chill down the spine of every Australian worker.”

“Today’s speech was such a lost opportunity. You know, we heard lots of slogans and lots of marketing, JobSeeker, JobKeeper, JobMaker, really hope that it doesn’t end up being a JobBlunder.”