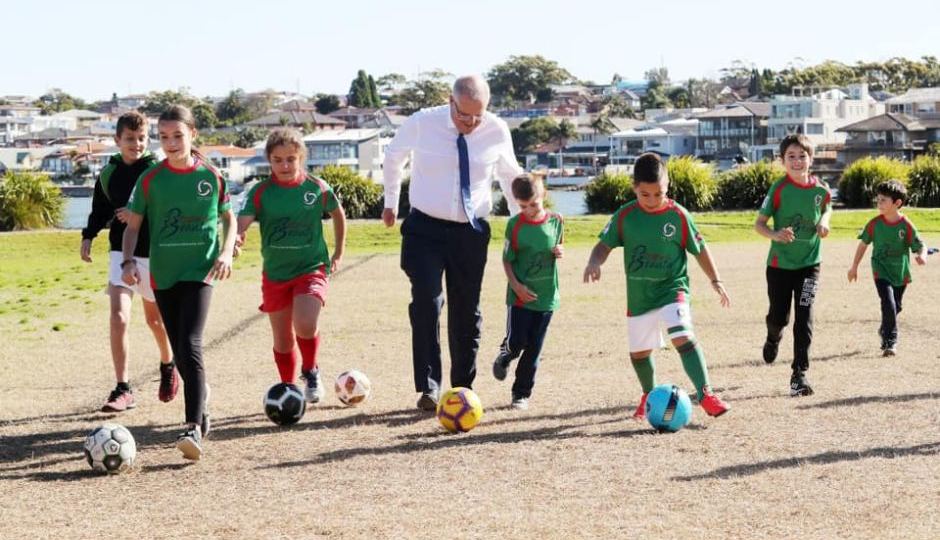 Mr Morrison at a media event to promote the club's grant. Photo: Facebook

A club in Scott Morrison’s electorate was given $50,000 for a building that had already been built – and the Prime Minister’s office was told about it before he attended a media event at the ground.

Although guidelines for the sports grants program stated projects that had commenced works were ineligible, the Sans Souci Football Club facility – located in Mr Morrison’s electorate – was about to be opened by the local state MP when the Sport Minister decided to award it money.

A spokesperson from the Prime Minister’s Office said the project had been assessed by Sport Australia as eligible and it was the responsibility of the applicants and Sport Australia to ensure projects met the criteria.

Hundreds of pages of emails have been tabled in the Senate providing unprecedented insight into the $100 million pre-election sports grants cash splash and the $150 million Female Facilities and Water Safety Stream program.

They include an email between the Prime Minister’s and then-sport minister Bridget McKenzie’s offices prior to the Sans Souci media event.

“It is worth noting that the club initially missed out on the first two rounds of funding under the Community Sport Infrastructure grant program,” the email stated.

“The club was subsequently funded in round three.

“During the intervening period, the club has fund-raised and the project is almost completed.”

The club sought $50,000 in the scheme as part of an $80,000 project for a clubroom and awning, according to the leaked spreadsheet.

Georges River Council stated the project was completed by April 6, 2019, and the club contributed $80,000 to the project alongside council and state government funding.

The $50,000 Commonwealth grant was given under round three, for which funding decisions were made on April 3, 2019 – three days before the opening was held.

A post by local state Liberal MP Mark Coure on April 9 marking the “official opening” of the building stated, “Sans Souci Football Club players are thrilled with the final outcome”.

Eligibility not job for PM

Sport Australia provided a list of 1943 eligible projects to the minister’s office in November 2018.

But after the government decided to expand the scheme to subsequent rounds, decisions to fund Sans Souci and others under round three weren’t made until April 2019, by which time work on some projects had commenced without Commonwealth funding.

The Prime Minister’s spokesperson said the Sans Souci project was approved for funding by the then-minister for sport based on its assessed eligibility by Sport Australia.

“After Sport Australia assessed the projects and the minister approved them, Sport Australia worked with the recipients to develop their funding agreements,” the spokesperson said.

“It was the responsibility of the applicants and Sport Australia to have ensured all projects met the eligibility criteria.”

“Thegovernment expects all organisations that apply for taxpayer funding to comply with the guidelines and eligibility criteria of those programs,” the government spokesperson said.

“The Minister for Sport is not aware of any advice from Sport Australia regarding eligibility of the Sans Souci Football Club.”

Heavily redacted emails tabled in the Senate show the scramble happening behind the scenes to figure out the process for managing the $150 million Female Facilities and Water Safety Stream, and specifically which department would manage the funds.

The project has been heavily criticised by Labor and members of the crossbench for having no formal guidelines or tender process, with some recipients learning through the media they were about to be handed millions of dollars.

The Coalition has defended the project, arguing the funding was outlined in the 2019 federal budget and it allowed the government to deliver election commitments.

Emails show that as late as September 2019, concerns were being raised the money had still not been transferred from the Infrastructure Department to the Health Department, where responsibility for sporting projects lies.

“The pools are not yet formally finalised as coming to us,” a government official wrote to another on August 8, 2019.

“If you are informing people that they are coming to us (which is expected) do you mind also saying it’s in progress to that outcome to give us half a chance to respond – otherwise I’m going to get bombarded and have no formal information or directive to be able to manage these requests.”

The ABC understands that among those inquiring about the program were major sporting organisations.

Emails dated in July include reference to lists of projects that “do not include those identified previously by PMO to be delivered out of the pools and female change rooms funding”.

The marginal Coalition electorates of Corangamite in Victoria and Pearce in WA received $60 million alone, or 40 per cent of the entire funding pool, from the project announced by the Prime Minister in March 2019.

The bundle of emails were presented to the Senate after the Upper House ordered the Federal Government to produce correspondence relating to the program.

The Senate inquiry hearing into the original $100 million sport grant scheme continues on Thursday when Sport Australia will appear.

A submission to the inquiry from Gippsland Ranges Roller Derby Inc, whose application was rated 98 out of 100 by Sport Australia but was not funded, stated: “We believe there is a significant trust deficit that needs to be remedied.”