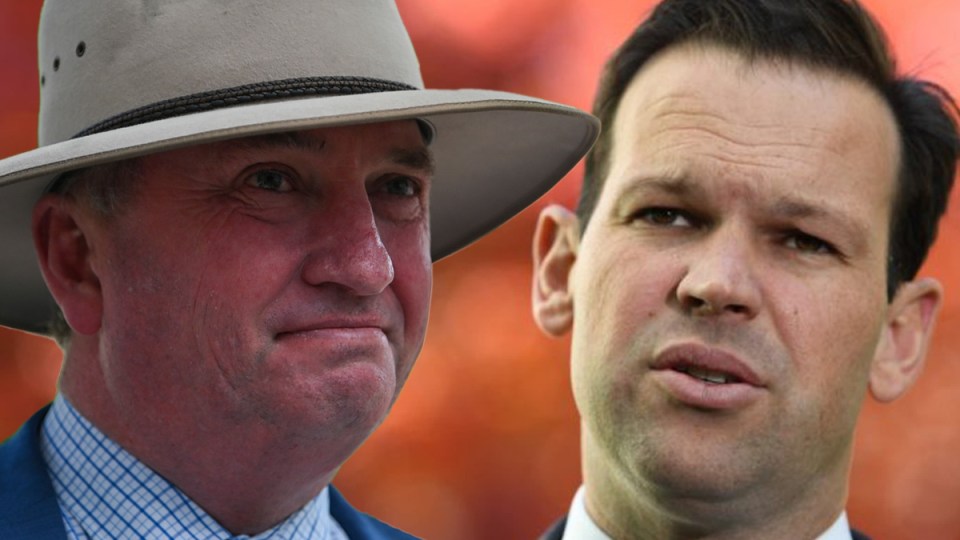 Barnaby Joyce and Matt Canavan have teamed up for a podcast that explores the future of the Nationals. Photos: AAP

Barnaby Joyce’s rebel roadshow now includes a podcast where the former leader speculates the Nationals “may cease to exist” – just days after he lost a leadership challenge.

The new half-hour podcast, Weatherboard and Iron, includes the former deputy prime minister’s confession that he regards Sydney as a “really just a miserable piece of coastline” that looks nice because “trillions of dollars have been spent”.

But it’s Mr Joyce’s grim predictions of the party’s future, after Queensland MP Llew O’Brien announced he would remain in the Coalition party room but quit the Nationals, that is likely to concern his colleagues.

Mr Joyce’s co-host, Nationals senator Matt Canavan said “the big issue” was that Mr O’Brien had effectively created a new party room – and added he had joked “in a few weeks, I might come join you”.

The pair also revealed they had urged Mr O’Brien “take a breath and talk it over”.

“Both of us tried to talk Llew out of it … and partly, at least in my case, I do want to see the National Party survive,” Senator Canavan said.

“I think it’s even more important now that we have this regional country voice down here.”

The podcast was the brainchild of Senator Canavan, Mr Joyce’s friend and colleague and former chief of staff.

According to the former Nationals leader, the pair “both have more time” as they languish on the backbench.

“It’s great to have time to have a discussion with the Australian people,” Mr Joyce said.

The half-hour podcast includes Senator Canavan’s thoughts on home-ownership and why it’s better to live in the country than in the city with “public transport and all the rubbish with that”.

“It’s a red herring … I genuinely know what’s going on,” he said. “[But] it’s been a very messy two weeks within the National Party.”

“The only breakaway I am aware of is the Otis breakaway,” he said.

“I don’t know if that’s Milo and Otis, or it’s just Otis, or how many others there are involved in this.”

Labor leader Anthony Albanese said a couple of his colleagues just had dinner.

“There is nothing unusual about this,” he said.

Nationals ‘may cease to exist’, Joyce and Canavan warn