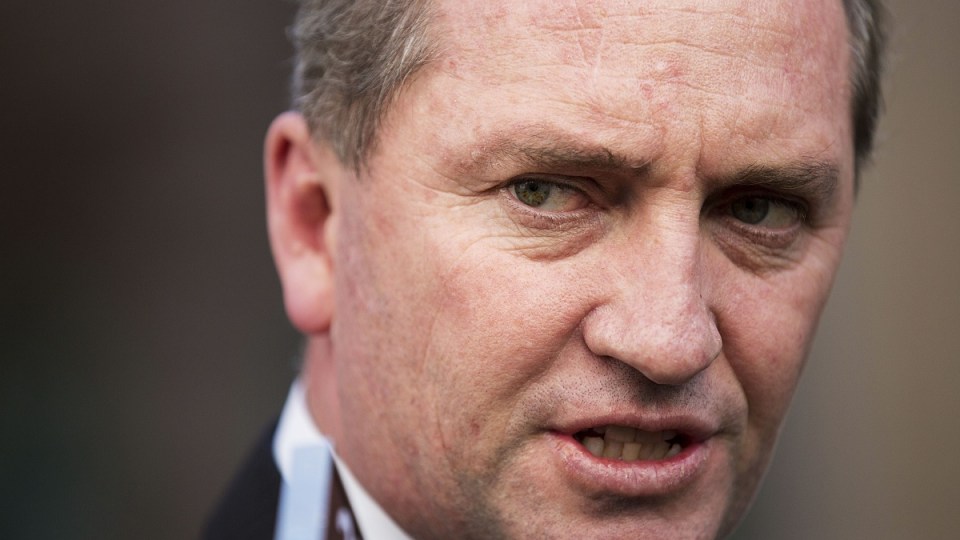 Barnaby Joyce is a political dinosaur, and he won't rest until he's the last one standing, Paula Matthewson writes. Photo: Getty
analysis

Seemingly not content with spoiling the day that was meant to be dedicated to the victims and heroes of the nation’s bushfire crisis, Barnaby Joyce ended this week as he began – trying to make it all about him.

It wasn’t enough for the last of the old school wreckers to force a leadership spill on Monday, when the Nationals only had to replace its deputy leader after Bridget McKenzie finally fell on her sword over the #sportsrorts affair. By getting two of his few loyalists to call for a spill of the leader’s position as well, the disgraced former leader fancied himself as the obvious victor.

Then, having miserably failed in that endeavour, and initially giving the impression that he would gracefully retreat to the backbench to focus on serving his electorate, the MP fell back to his default position of being a hollow extortionist who’d blow up the joint if he didn’t get his way.

Is it any wonder the majority of Nationals MPs declined to return Mr Joyce to the leadership role?

Whatever happens from here, Barnaby Joyce’s greatest legacy will always be inspiring a federal ban on sex. 🇦🇺 pic.twitter.com/XWNxgXh19P

With four additional women elected to the Nationals ranks at the 2019 federal election, and representatives of rural women warning against his return, did he think through the implications of telling the ABC on Monday morning that he was now in a steady relationship with two boys and that the “personal infrastructure around is me is such that I believe I’m in a better position to go forward”.

So much for his wife of more than two decades and four daughters.

It’s also a fair bet that if any Nationals MPs reluctantly voted to keep the current leader for the sake of stability, they’d be glad they did so following Mr Joyce’s continued demonstrations at the end of this week of his unsuitability for high office.

Threatening to cross the floor against the Coalition is Mr Joyce’s stock in trade – it’s the final card that he tries to deal when all else has failed. When he can’t win on the merit of his argument, the Nationals MP simply threatens to blow up the show instead.

He is even famous for following through on the threat and has crossed the floor to vote against his colleagues on tens of occasions.

However there’s one little detail that people tend to miss or forget about Mr Joyce’s apparent heroics – he has never voted against the Coalition when his vote would have made a material difference to the passing of government legislation.

It’s true that the Joyce cabal are threatening to do so now, but here’s the thing – there are up to five votes on the House of Representatives crossbench the government could secure to pass legislation if the three declared Nationals saboteurs delivered on their threats.

It’s also worth noting why Team Joyce is miffed – because none of them got a guernsey in the ministry reshuffle that resulted not only from the departure of Ms McKenzie but also of Matt Canavan, who resigned in an attempt to create momentum for Mr Joyce’s leadership bid. Senator Canavan is Mr Joyce’s protégé and his former chief of staff.

Just before 8am, Matt Canavan stood in the Press Gallery corridor and backed Michael McCormack as leader of the Nationals.

Just after 7pm, Matt Canavan stood in the Press Gallery corridor and backed Barnaby Joyce as leader of the Nationals.#auspol is at it again

Apparently the victorious Nationals leader, Michael McCormack, who in fact chooses his party’s ministers (rather than Scott Morrison), should have done the Biblical thing and returned Senator Canavan to the ministry – so that he was well positioned to resign again when Mr Joyce was ready to make his next move.

For let’s not kid ourselves that this is over; just like that other old school wrecker, Tony Abbott, Barnaby Joyce will not rest until he is leader again.

The question for other Nationals MPs, particularly the younger generation, is whether they are willing to stand by and watch a narcissist dinosaur destroy their party to assuage his delusions of grandeur.

Paula Matthewson: Barnaby, the last of the dinosaur wrecking crew