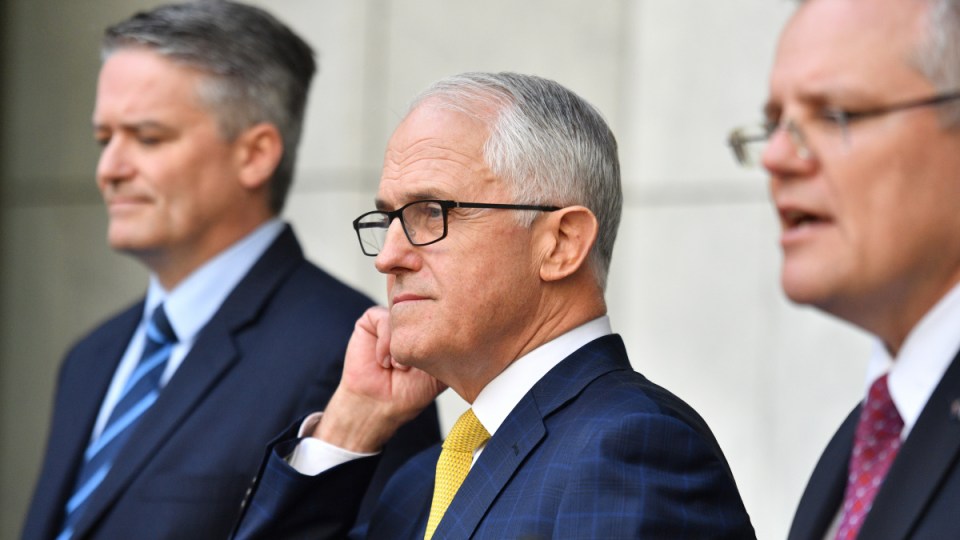 Senator Cormann and Malcolm Turnbull at the height of leadership tensions in August 2018. Photo: AAP

Finance Minister Mathias Cormann has been forced to defend suggestions he was “weak and treacherous” in the political knifing of Malcolm Turnbull.

Mr Turnbull levelled the accusations against Senator Cormann in a private text message exchange at the height of the Liberal leadership coup 18 months ago.

The correspondence is expected to be published in Mr Turnbull’s autobiography, which will come out in April.

Senator Cormann played a central role in the Liberal leadership coup after switching his allegiance to Peter Dutton. It was his last-minute change of heart – along with fellow senators Michaelia Cash and Mitch Fifield – that delivered the numbers that would roll Mr Turnbull as prime minister.

In the hours after the leadership coup, Senator Cormann texted Mr Turnbull to apologise for what had happened and deny being part of an “insurgency”.

“I genuinely backed you until events developed, sadly, which in my judgment made our position irretrievable,” he wrote.

“All this has been very painful – yes, I know, first and foremost for you, and for that I am very sorry.”

But an angry Mr Turnbull replied by telling Senator Cormann he should be “ashamed”.

“At a time when strength and loyalty were called for, you were weak and treacherous. You should be ashamed of yourself,” he wrote.

On Monday, Senator Cormann – who remained as Finance Minister when Scott Morrison became Prime Minister – said he stood by his actions, although it was all “ancient history”.

“Malcolm took me by complete surprise when he brought on a surprise leadership ballot on the Tuesday,” he told ABC radio.

“Malcolm brought on that leadership ballot. After he did that and given the result of that particular ballot, the rest of us had to deal with the consequences.”

Senator Cormann disputed claims Mr Turnbull would have retained the prime minister’s role, had he not switched sides.

“I completely disagree with you,” he said.

“I happen to believe that Malcolm Turnbull’s position at that time had become irretrievable and that he had lost the confidence of the party room.

“That if we did not resolve the matter properly and with certainty, appropriate certainty, that week that the position of the government would become irretrievable. That remains my judgment.”

Senator Cormann said it would have been weak of him to run away from dealing with the issue.

“This issue had to be dealt with in the interests of the country, the government and the Liberal Party. We dealt with it,” he said.

“The Australian people at the election clearly endorsed the judgments that we made.”