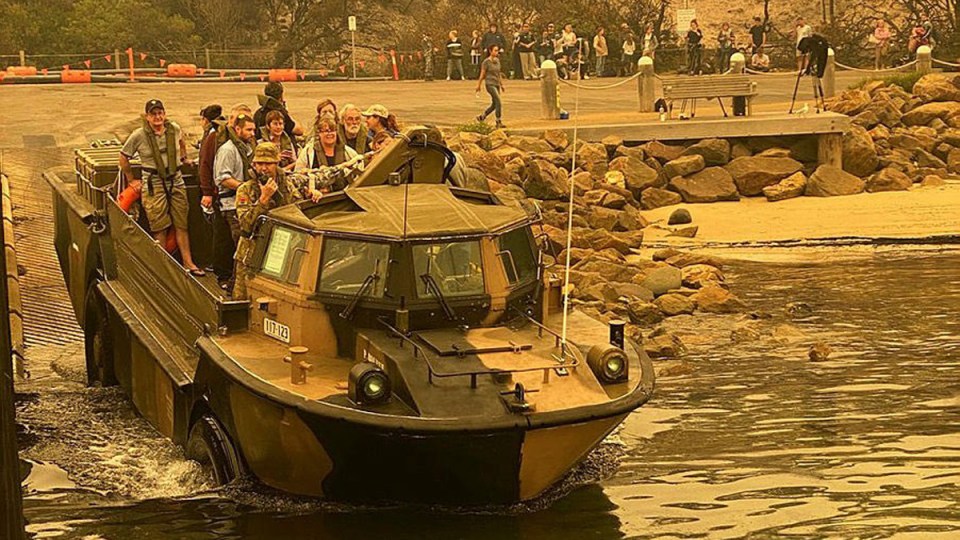 Navy personnel begin the mass evacuation from Mallacoota, in Victoria, at the height of the Black Summer crisis. Photo:AAP

Prime Minister Scott Morrison has flagged new powers to allow a “national state of emergency” to be declared in crises such as the current bushfires.

The PM used a speech to the National Press Club in Canberra on Wednesday to lay out areas of practical action the federal government can take to deal with emergencies.

Mr Morrison said he did not want to take over police, fire, ambulance and medical services from the states.

“The incredible skill and bravery of our state fire services have saved so many lives over this summer,” he said.

But he said there was a “clear community expectation” the government should be able to respond to national emergencies and disasters.

He said this summer’s disastrous bushfires had tested the limits of how the federal government interacted with the states, which in the past had required a request for assistance from premiers.

The Prime Minister defended his government’s response time to the ongoing disaster, saying he reflected daily on how he could better service the country.

“The one thing I don’t want any Australian to feel like when they go through a situation like that is that they are alone and they are isolated,” Mr Morrison said.

To clear up issues such as when defence forces could be used, the government will examine three steps:

The defence force involvement in supporting bushfire efforts was bolstered from 900 personnel in December to more than 6500 in January, with the federal government acting without a request from the states but with the approval of Governor-General David Hurley.

It was the largest domestic ADF operation seen in Australia, with more than 13 fixed-wing aircraft, 20 rotary-wing platforms and three naval vessels involved.

Mr Morrison also repeated his support for a royal commission into this summer’s bushfires. If backed by the premiers and chief ministers, it will have the initial task of auditing previous inquiry recommendations.

Federal parliament will resume next week with a day of reflection on the bushfires scheduled for February 4.