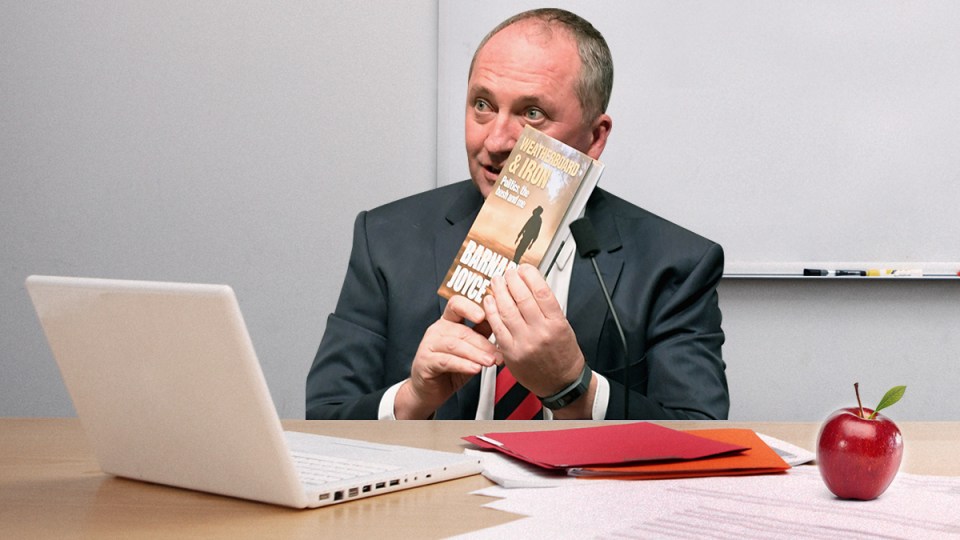 Just about everyone had a crack, but it was Barnaby Joyce who taught us the biggest political lesson of 2019. Photo: TND

It’s a fair bet that most Australian politicians will be glad to see the back of 2019.

Even after pulling off a miracle election win, PM Scott Morrison will undoubtedly be among the MPs encouraging voters to look to the future rather than dwell on what happened over the past year.

But before we do that, drawing a line under the misdemeanours, cock-ups and bad behaviour of the past 12 months, let’s take a look at the five surprising things that we learned about Australian politics in 2019.

Oppositions can’t win an election with an unpopular leader

This is probably the biggest lesson to be re-learned from the past year. Labor relied on the example of unpopular opposition leader Tony Abbott storming into government at the 2013 federal election and convinced itself that it could do the same with its own unpopular leader, Bill Shorten.

Whether the poor voter perception of Mr Shorten was unfair or not, confected by the Murdoch press or not, or even exacerbated by Clive Palmer, there is no avoiding the fact this year’s election confirmed voters are unlikely to hand government to an opposition leader they don’t like or trust.

It turns out Mr Abbott was the exception that proved the rule, rather than the rule-breaker. And Labor was consequently unable to depose a tired and broken Coalition government that had summarily disposed of two prime ministers in less than three years.

A record rate of young people (88.8%) were registered to vote in the 2019 federal election, thanks in part to the 2018 marriage equality campaign but also the Australian Electoral Commission’s diligent efforts. But as they say in the classics, you can put a young person on the electoral roll but you can’t make them vote.

About 1.5 million Australians who registered to vote didn’t bother turning up to a polling place for a democracy sausage this year. And this epidemic of ennui was most prevalent in electorates where the median age was younger (around 30 years old) than the rest of Australia.

In these seats, anywhere from 10 to 30 per cent of voters apparently couldn’t give a rat’s ding who won the election.

It’s the economy, stupid – until it’s not

For those people who did vote, the most important factor that influenced Australians to stick with the government at the 2019 federal election was the economy, based on the perception (whether or not it was deserved) that the Coalition was a better economic manager.

The economy is strong with this one. #StarWarsDay #MayThe4thBeWithYou pic.twitter.com/xhR8znXVJe

Yes, the economy has tanked since then, but that’s not the only lesson to be taken from this point. The more important lesson is that voters now rank the environment as the biggest issue for Australia.

And if Australia continues to burn every Christmas until the next federal election, the environment could be the issue that changes the government.

Everyone hates the Greens – except voters

Speaking of the environment, one of the most bemusing revelations during 2019 was that the Nationals, Liberals and Labor all detest the Greens. Not just the usual amount of detestation that you would expect from political foes, but as if the progressive MPs each were the devil incarnate.

No superlative or hyperbole was too much this year when it came to denouncing the minor party, which incidentally was the only party calling for the things that voters wanted, such as real action on climate change and compassionate treatment of offshore detainees.

Unsurprisingly, the Greens vote at the election was healthy, increasing a small amount in the House of Representatives and by 2 per cent in the Senate.

OK, this revelation isn’t all that surprising, but it is one that kept cropping up during 2019. The man previously known as Australia’s best retail politician is clearly not coping well with being relegated to the bottom of the bargain bin.

If he wasn’t posting strangely religious missives on social media about trusting the Big Guy on climate change, or shrieking “Labor, Labor, Labor” at a journalist during an interview, the former leader of the Nationals was manoeuvring behind the scenes to get his old job back.

Thankfully, at least so far, Mr Joyce’s colleagues have declined all such advances. Perhaps they have learned the lessons of 2019. We can only hope so.