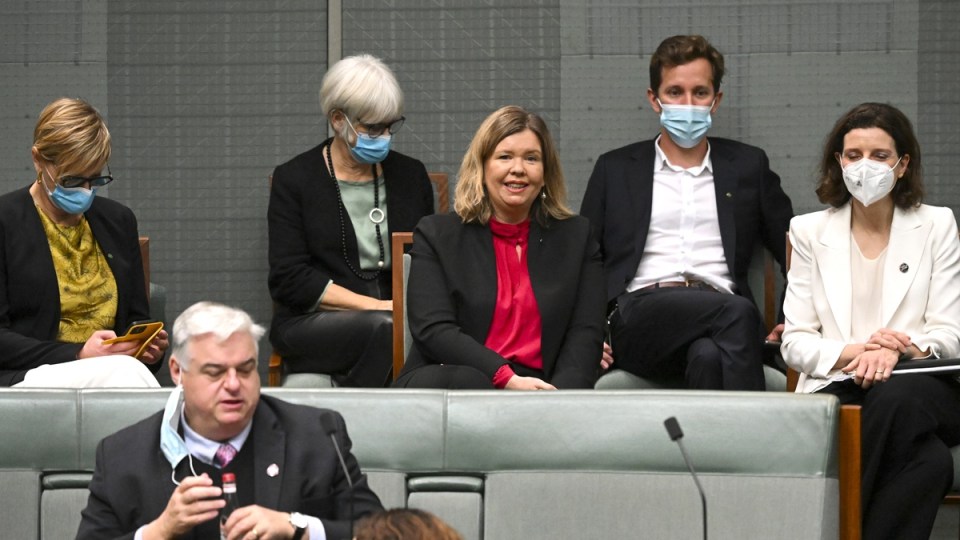 A bill enshrining an emissions reduction target of 43 per cent into law passed the House of Representatives.

The government’s Climate Change Bill passed on a vote of 89 to 55 with the backing of the Greens and crossbenchers after half-a-dozen amendments were carried on Thursday.

“This bill records the government’s ambition to take the country forward on climate action – and it reflects our determination to bring people with us,” said Prime Minister Anthony Albanese.

The Minister for Energy Chris Bowen said the change was “overdue” and the bill passed after constructive deliberations.

“Today is a good day for our country,” he said. “With government, business and the community all pulling in one direction, our emissions reduction can be even greater.”

Liberal MP Bridget Archer crossed the floor to vote for the legislation. She had told the house on Wednesday night that she would act to reflect the views of her electorate in northern Tasmania.

“I believe he understands why I’ve made this decision,” she said of discussions with the Opposition Leader Peter Dutton.

“It is important that we do move forward and we act now and not delay until the eve of the next election.”

The bill will now go to the Senate.

Greens leader Adam Bandt said on Wednesday his party would back it, despite reservations – leaving the government in need of support from the Jacqui Lambie Network or independent Senator David Pocock. The government is confident of its passage through that chamber.

The Coalition voted against the bill and seven amendments on Thursday, including one from Indi MP Helen Haines that requires regional Australia be included when future targets are developed and that progress is accounted in annual climate statements to Parliament.

Ms Haines said it was “bitterly disappointing” that the Coalition did not back the amendment which, she said, would deliver regional Australia “enormous economic and social benefits from clean energy and new industries”.

Other amendments carried included explicitly targeting a Paris Agreement goal of keeping warming under 1.5 degrees, ensuring further targets would rise not fall and be guided by scientific advice, and beefing up public disclosure requirements on how targets were being met.

Independent MP for Goldstein Zoe Daniel said the passage of the amendments reflected a focus on building consensus on climate change in the new Parliament, even in the lower house where the government has a majority.

Independent MP for Fairfield Dai Le abstained, saying she believed the bill had been rushed through Parliament. Ms Le is a former member of the Liberal Party who was expelled in controversial circumstances.

Nationals MP Darren Chester later addressed the lower house to say that he voted incorrectly on the bill. Another independent, Kooyong MP Monique Ryan, also admitted to an error in one vote.

The bill’s target is relative to national emissions as recorded in 2005 and a landmark towards realising Australia’s “net zero” commitment on carbon emissions by 2050.

Opposition Leader Peter Dutton resolved this week to raise the Coalition’s target from its Abbott government era 26 to 28 per cent before the next election.

Shadow energy minister Ted O’Brien will lead a review of how nuclear energy might figure in a raised target.

On Wednesday, Mr Albanese compared Mr O’Brien, a Queensland MP and nuclear power booster, leading the review to Homer Simpson being in charge of safety at a nuclear power plant.