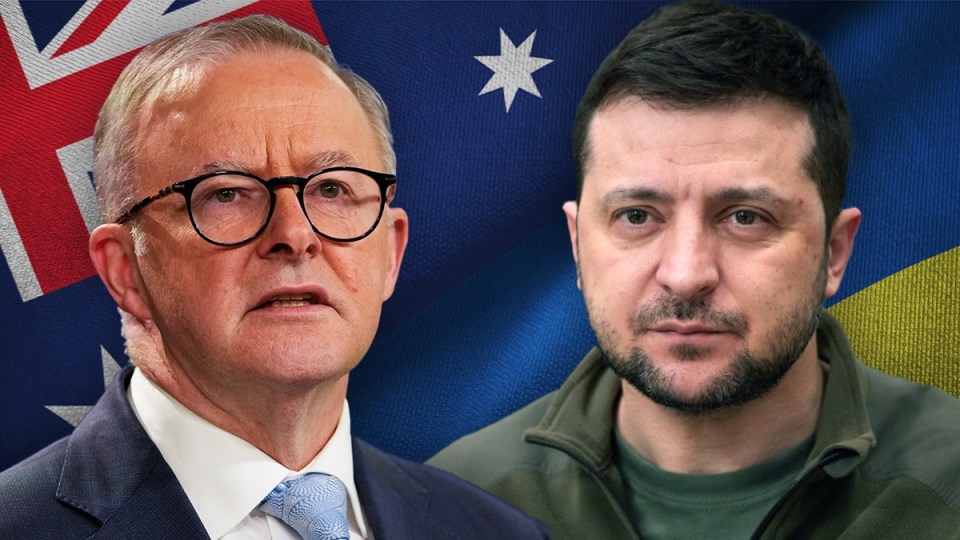 Prime Minister Anthony Albanese has been non-commital about a meeting with the Ukrainian President. Photo: TND

In his first month on the world stage Anthony Albanese received top marks from some in the foreign policy and defence establishment – and members of its typing pool – for performing above expectations.

But Mr Albanese is now facing criticism for chewing over one overseas engagement many might have presumed a slam dunk for any prime minister.

On Wednesday he again seemed to duck a question about whether he would be accepting an invitation to visit Ukraine President Volodymyr Zelensky in Kyiv at the end of this month.

“We will take advice from the national security agencies and from Defence and will respond to that advice as appropriate,” Mr Albanese said.

He made similarly non-committal remarks a week ago. There’s less than a week left until what would be a likely tie-in for such a trip, his attendance at a historic Madrid summit of world leaders on the future of NATO.

Democracies ‘should support each other’

This has caught the attention of Peter Jennings, former head of the Australian Strategic Policy Institute.

“I think not travelling on the basis of security concerns is going to look fairly ridiculous. He could be in and out of Kyiv literally within three hours.

“Democracies should be supporting each other.

“My particular concern is that China is looking at Ukraine very much to sort of assume and accumulate lessons for its own designs on Taiwan.”

Mr Albanese’s equivocations follow bipartisan condemnation of Russia’s invasion and a response from the previous government that extended to demanding Russian state television be wiped from the internet.

Last week Mr Albanese said he had only just learnt of the invitation from President Zelensky.

But talk in Canberra’s diplomatic circles suggest that Ukraine’s energetic ambassador Vasyl Myroshnychenko has been lobbying hard for a Kyiv meeting since even before last month’s election.

“He is still holding out hope,” one source said.

But Mr Myroshnychenko has recently been seeking to hand deliver a written request from President Zelensky to the PMO but has apparently yet to secure a top-level private meeting.  He is increasingly turning to public appeals.

Two days after the election he told Australian media the president would soon invite Mr Albanese to Kyiv, then he spoke to reporters after returning from Ukraine with a hard copy invitation and earlier this month even floated plans for a free trade agreement.

Meanwhile, the leaders of France, Germany and Italy have been able to visit the President’s Kyiv bunker in the past week – so too has Hollywood star Ben Stiller.

One Canberra observer said this week that President Zelensky sought foreign visits “in the same way a hunter collects trophies” and media coverage had inflated perceptions of such meetings’ significance.

Boris Johnson has visited Kyiv twice, including recently even after his own office had become besieged.

The UK PM recently warned that the West must deliver support to help Ukraine defeat Russia which could otherwise secure a favourable peace deal after setting up a military stalemate.

While European leaders made a show of support in Ukraine they did not promise the arsenal needed to repel the invasion. Emmanuel Macron was accused of putting off the trip after he spoke openly about finding a diplomatic solution to the conflict.

Former PM Scott Morrison signed off on a $285 million aid package after Russia’s invasion and said sitting with Vladimir Putin around a table at a G20 leaders meeting in Indonesia this year would be a step “too far”.

Mr Albanese has consistently condemned a “barbaric” war but said the G20 meeting was too important to miss.

Indonesian President Joko Widodo has just revealed a plan to visit Moscow and Kyiv next week.

As the leader of one of the world’s largest developing countries with long-standing ties to Russia and a history of foreign policy independence, he presents as a credible peacebroker.

Not wanting to coincide with the Indonesian President or break security protocol by announcing a war zone visit in advance could explain Mr Albanese’s hesitation while allowing for a trip possibly at another time. But going next week would answer growing criticism at little cost and generate positive publicity.

If he chooses not to Mr Albanese might be reserving the right to take a more independent approach to Ukraine without changing Australia’s objectives.

The former chief of the Australian Army, Peter Leahy, told The New Daily going to Kyiv was not comparatively important when Mr Albanese was already traveling to represent Australia in discussions on the future shape of NATO and European security.

“Australians and the Australian government had made their position abundantly clear,” said Professor Leahy, now head of the national security institute at the University of Canberra.

“They’re opposed to the invasion of Ukraine by Russia, and watching day by day as Russia commits more crimes and atrocities.

“There’s a lot going on in the national security space and the Prime Minister, I think, is right to allocate the substantial amount of his time to business with NATO.”