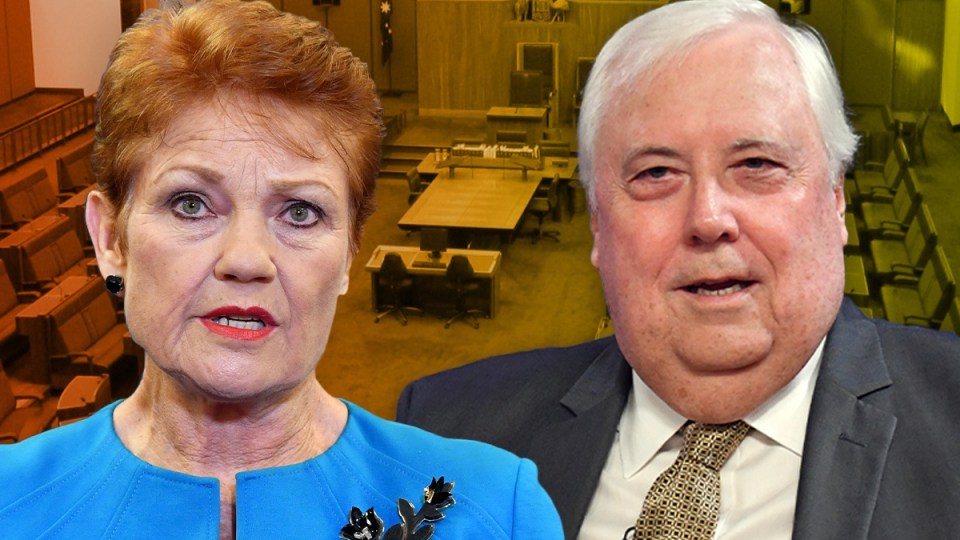 Pauline Hanson and Clive Palmer: The two leaders have actually been engaged in a struggle for territory for a while. Photo: TND

Far-right parties are preparing for a major run at the upcoming Victorian state election as their leaders take comfort in the broader movement’s rising share of the vote at the federal election.

Entrepreneurs on the fringes of politics have enjoyed rare opportunity and relevance in the past two years.

Protests against long lockdowns in Victoria ran for months and focused on the state’s parliament. Right-wing political groups used them to sell a classic message about government overreach.

But even with a running start, the November state election is shaping as a key test of whether far-right ideals can appeal to voters outside the peculiar political environment of a pandemic.

A new class of right-wing leaders who grew their support bases during isolation is lining up to contest.

Among those stepping forward are the Great Australian Party, backed by former bankrupt and turfed One Nation Senator Rodney Culleton, and the Australian Federation Party, which opposes mandates and reproductive choices.

Melbourne’s most high-profile anti-lockdown campaigner, Monica Smit, who was once jailed for incitement, is also in the mix.

The Victorians is another party that was founded out of lockdown opposition but on otherwise seemingly flexible ideological foundations.

Friendly press and its own polling have suggested the party might win 10 seats. But alarm bells do not yet seem to be ringing on Spring Street.

Even Nazis sought to blend their own messages with those of protesters.

One source said a former Queensland Coalition state MP Aidan McLindon had acted recently as an intermediary between interests.

The political consultant said that he had assisted negotiations between a group of parties intending to contest the Victorian poll. Mr McLindon described the parties involved as falling across the political spectrum and said he would speak to them before making public statements about the contents of discussions.

Mr McLindon helped Bob Katter launch his own party before aligning with Family First and then striking out on his own as a political consultant.

The state poll is so critical, experts say, because it tests if right wing ideals are electorally viable under ideal conditions but also because growth in the federal arena now seems stubbornly out of reach.

The former leader of the United Australia Party, which only narrowly clinched a Senate seat despite a massive $60 million ad budget, chooses to see it less as an underwhelming indictment on the strategy of the political right and more as an affirmation of its ideas.

“It could have been a lot better,” Craig Kelly said, suggesting his party, One Nation and the Liberal Democrats (anti-mandate parties some group as a “freedom movement”) spread themselves too thin, securing less than 11 per cent of votes.

“In many cases preferences from the so-called freedom parties flowed more strongly to the major parties than the other minor parties,” he said.
“In some cases our campaigns hurt the broader cause.”

A former dissident Liberal MP, Mr Kelly lost his south Sydney seat of Hughes but said trying to foster tactical collaboration on the right would be a focus of his new goal as head of the UAP organisation – a role he expects to relish.

“I feel the political issues still run strongly through my blood. I am having the pleasure of going ‘I told you so’,” he said.

“[I was attacked] over the last two years for misinformation – but the hindsight of time is proving that I was 100 per cent correct.”

The Greens secured about 1.8 million votes nationally, for which they secured six upper house seats; with fewer than 1.6 million the freedom parties emerged, just barely, with two.

“Could they be holding the balance-of-power?” he said. “Easily”.

But University of Canberra researcher of the political right, Jordan McSwiney, noted a marginal gain in the parties’ collective votes was pumped by One Nation’s decision to contest every lower house seat and the peaking of a rejection of the major parties.

Dr McSwiney said there should be no presumption that supporters of these parties formed a natural voting bloc; he said one recent attempt to bring them together failed spectacularly.

“A UAP coup of the One Nation constituency [was] exactly what they tried to do in 2019, when they relaunched as the United Australia Party,” he said.

“They’ve been trying to poach that constituency pretty actively since day dot and they haven’t been able to in any meaningful way.”

One reason is that smaller parties seem to thrive on strong leaders (Senator Hanson is One Nation’s president for life) and neither UAP nor the Liberal Democrats are spoilt for choice.

“Even if we look at One Nation’s 30-year history, for 20 years of that, give or take, without Hanson, they were electorally irrelevant,” he said.

One uncharitable corollary of which is that big egos do not readily cooperate.

Mr Druery thinks that well before any long-term electoral strategies have had a run, November’s Victorian election will be a magnet for a new crop of hard-right parties and leaders.

“Some of these new players really are potentially very dangerous.”

Mr Druery said he previously took a morality-free view of elected politics and did not often reflect on his personal history of putting “a few pretty eclectic people in parliament”. (It was the early innovation of the Outdoor Recreation Party that lugged NSW voters with corrupt MP Malcolm Jones.)

But he said the effects of exclusionary politics started occupying his mind in recent years, though he did not believe he alone has changed.

He predicted disorganisation will limit the electoral impact of the hard right but also that its campaigns may still do damage.

“Do I regret helping some of those candidates early on? You bet. Did I learn? Yep. But did they keep me up at night? No,” he said.

“But this new crop don’t know anything about the rules of the game.”