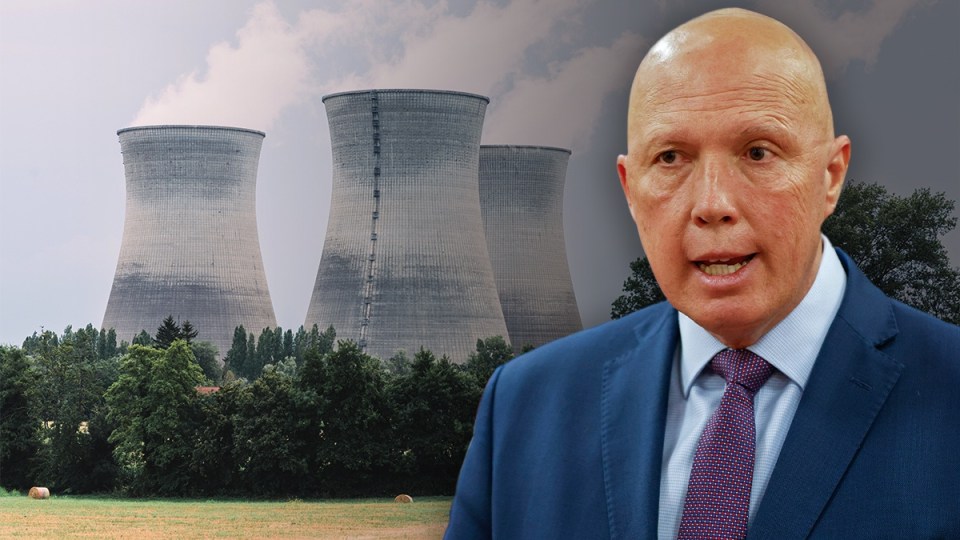 New Opposition Leader Peter Dutton appears set to bring a debate about nuclear power back to the centre of Australian politics.

The appointments signal an intent to take an aggressive tack on emissions as well as Mr Dutton’s seemingly new willingness to flirt with nuclear power as a means of bridging Liberal climate divisions (and perhaps stoking others).

Mr Dutton said on Monday he was “not afraid to have a discussion on nuclear”; it was only a week prior that he declared nuclear energy was “not on the table”.

Mr O’Brien chaired a parliamentary inquiry that recommended  provisionally lifting a ban on generating power from nuclear material and considering its future use.

The regular Sky News panellist told The New Daily on Monday that “we absolutely should be having the discussion”.

The new leader of the Nationals, David Littleproud, is also on board with calls to kickstart a nuclear debate.

Advocacy of nuclear power has advanced much further in that party room; several MPs backed a nuclear push last Parliament.

The balance of opinion among Liberal MPs has been tilted in favour of nuclear power for some time, a party source said, but had been deemed a nonstarter because of deep fears of an electoral backlash.

Former prime minister Scott Morrison noted that a change of direction on an issue needing such long-term investment could only come with bipartisan support.

Tony Wood, who heads energy and climate policy at the Grattan Institute, says nuclear energy could make a contribution to Australia’s transition from fossil fuels if public concerns could be overcome and the technology became economically viable.

New nuclear installations are being constructed in countries such as France and the United Kingdom, but they have not been viable when compared to fossil fuels or, more recently, wind and solar.

“The case for nuclear power all depends on the circumstances,” he said.

“The technology that they’re still using in most of these power stations is very expensive.”

Mr Wood said the economic calculus could change depending on how Australia tracks in the journey to net zero.

“We have huge amounts of alternative energies we can use to produce electricity without greenhouse gas emissions and, probably, we’ll be able to do 90 per cent of that job,” he said.

“But if it becomes increasingly difficult or expensive to get the last 10 per cent, we might change.”

Mr Wood said Australia’s ability to complete the last stage of the renewable energy transition was thrown into doubt by the scale and the cost of supporting investment in transmission and storage technology.

Nuclear power could figure as an option for overcoming these limitations alongside hydrogen power, offsetting emissions or proceeding with renewables despite an “eye watering” bill for supporting infrastructure.

Mr Wood says it should be clear inside a decade whether investments in China and elsewhere can deliver mass producible, small “modular” nuclear power plants that make the technology cheaper.

“This is not a problem for right now,” he said. “But I wouldn’t rule it out.”

In the meantime, Mr Dutton’s shift could revive an issue that has sharply divided Australians.

The new government is projecting more progress towards net zero by the decade’s end and Prime Minister Anthony Albanese has pledged $20 billion for upgrading the grid to integrate renewables.

Energy Minister Chris Bowen has described the case against nuclear power as “open and shut” on the basis that it is uneconomic.

Two pieces of federal legislation and many state laws prohibit nuclear power, and opposition within the states appears bipartisan.

Former prime minister John Howard has predicted that Australia will be advanced towards a nuclear future within a decade.

But in government Mr Howard backed away from taking up the policy.

That was after he commissioned the Switkowski report, which sketched out a future in which up to one-third of power was generated by nuclear facilities, including some close to population centres.

A submission to Mr O’Brien’s 2019 parliamentary inquiry made on behalf of the Queensland Liberal National Party opposition noted major concerns about the political and commercial risks of any nuclear industry.

In 2016, former premier Jay Weatherill instituted a Royal Commission into a nuclear industry for South Australia that found power production would not be commercially viable and could only operate with community approval.