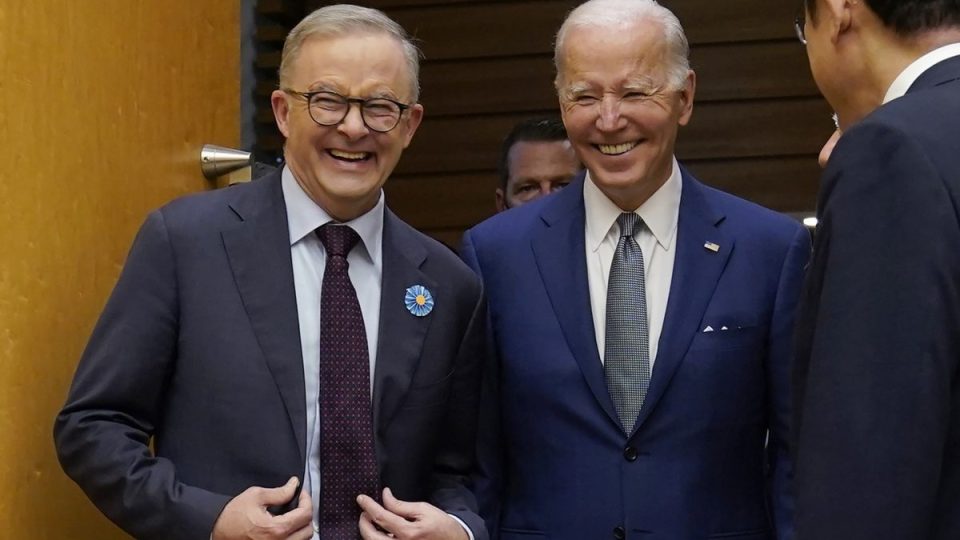 US President Joe Biden has joked about Anthony Albanese’s rapid progression from Saturday’s election victory to meeting heads of state at the Quad meeting in Japan.

“You got sworn in, got on a plane and if you fall asleep while you’re here, it’s OK,” Mr Biden said as he met the new Australian Prime Minister in Tokyo on Tuesday.

“It’s really quite extraordinary just getting off the campaign trail as well. Congratulations on your election.

“We greatly appreciate your commitment on being here so soon after taking office.”

Mr Albanese began high-level talks with his US, Japan and India counterparts focusing on the security of the Indo-Pacific at the Quad leaders’ summit on Tuesday.

Mr Albanese – who arrived in Tokyo late on Monday, only hours after being sworn in as Prime Minister – told Mr Biden, Fumio Kishida and Narendra Modi that his government’s priorities aligned with the Quad’s agenda.

That included acting on climate change and building a stronger and more resilient Indo-Pacific.

“It’s an honour that this is my first act as prime minister, to attend this important Quad leaders’ meeting here in Japan,” Mr Albanese said.

“As we gather today, I acknowledge all that the Quad has achieved. Standing together for a free, open, and resilient Indo-Pacific region. And working together to tackle the biggest challenges of our time, including climate change and the security of our region.

Mr Albanese said he would continue to stand with like-minded allies as Australia put a renewed focus on Indo-Pacific and Southeast Asia.

“Our cooperation is built on the values that we share – a commitment to representative democracy, the rule of law and the right to live in peace,” he said.

“We will stand firm on our values and our beliefs, on what we know will enhance the prosperity and stability of our region and what is firmly in the interests of all those who call the Indo-Pacific home.”

“We will act in recognition that climate change is the main economic and security challenge for the island countries of the Pacific,” he said.

“We will bring more energy and resources to securing our region as we enter a new and more complex phase in the Pacific’s strategic environment.”

On top of regional security, the leaders’ meeting will also focus on establishing supply chain principles, including discussions about human rights after the US passed legislation in December banning imports from China’s Xinjiang region.

A similar push in Australia stalled under the Morrison government, despite being recommended by a parliamentary foreign affairs committee.

There will also be a focus on telecommunications markets for 5G and 6G to counter Chinese dominance in the field, as well as climate change, infrastructure needs and collaboration on disaster relief.

Mr Biden said the partnership was about democracy against autocracy.

“We’re navigating a dark hour in our shared history. The Russian brutal war against Ukraine has triggered a humanitarian catastrophe,” he said.

“The fundamental principles of international order, territorial integrity and sovereignty, international law, human rights, must always be defended, regardless where they’re violated in the world.”

On the sidelines in Tokyo, Foreign Minister Penny Wong held bilateral discussions with her American and Indian counterparts.

Senator Wong met Subrahmanyam Jaishankar on Monday night after arriving in Tokyo on the same day as being sworn in. She spoke to Antony Blinken and the White House’s top Indo-Pacific security adviser, Kurt Campbell, on Tuesday morning.

The meetings focused on Chinese influence in the Indo-Pacific, including through its new security agreement with the Solomon Islands, as well as the challenges proposed by climate change.

“We discussed what was happening in the Pacific, the Solomon Islands and the importance of working together with other partners to secure the region,” she said.

Mr Albanese will also hold individual bilateral talks with the leaders throughout Tuesday.

President Biden met Prime Minister Kishida on Monday, when he unveiled the Indo-Pacific Economic Framework for Prosperity. It includes a dozen initial partners making up 40 per cent of the world’s GDP.

It comes after Australia condemned Russia, alongside the US and Japan, in a seven-nation statement on Monday following APEC, where no joint statement was issued.

The official Quad communique is unlikely to expressly condemn Russia over its invasion of Ukraine.

India has refused to outright condemn the invasion due to its close military trade with the Kremlin.

Australia will host the next meeting of the Quad, in 2023.

Mr Albanese and Senator Wong return to Australia on Wednesday.