Labor strategists believe Scott Morrison is the biggest barrier to his own re-election.

Labor is rapidly outspending the government on election advertising, but is redirecting its pitch to voters without strong views on the Prime Minister’s character.

In the fortnight leading up to the Anzac Day long weekend, a passage of campaign covered in a new Nielsen Ad Intel report, Labor spent more than $1.3 million on commercials in capital cities compared to about $480,000 spent by Coalition headquarters.

Labor has now spent $1.2 million more on ads of all kinds than the government, according to related data on parties’ expenditure on ad buys since the campaign officially began until its halfway mark one week ago.

The Nielsen Ad Intel data shows Labor has spent about $3.2 million on its total advertising push, compared to a little more than $2 million for the Coalition.

The United Australia Party is, as it said it would, leading the national league for campaign advertising and has spent, according to Nielsen data, $11.3 million in the campaign proper.

(The UAP says it will spend a total of $70 million rolling out messages for this campaign but it began its advertising buys as early as September while many of its opponents on the political right were still positioning.)

The Greens are in last place by far and spent just over $238,000 on all mediums measured by the Nielsen monitoring. 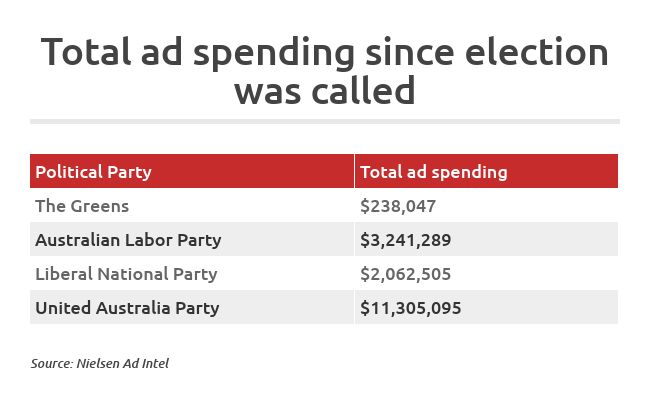 Labor’s advertising surge coincided as it began to roll out a series of negative campaigns aimed squarely at Mr Morrison’s character and perceived problems with the government’s record relating particularly to alleged failures to disburse public money according to merit.

The opposition has carried out an almost exclusively negative campaign focused on Mr Morrison’s character from early in the campaign right through to the open of early voting on Monday.

Party figures have no reservations about discussing what they view as the greatest obstacle to the re-election prospects of Scott Morrison: Scott Morrison.

The television spots cover his holiday during the Black Summer bushfires as well as statements in which the Prime Minister appears to deny responsibility (“that’s not my job”) and a claim, linked to Mr Morrison’s management of COVID-19 vaccination rollouts, that he makes “too many mistakes”.

The hits tapped into themes volunteered by voters to campaign researchers.

“It all comes down to: ‘not my job’; ‘out of touch’; ‘and no empathy’,” an ALP source said of the criticisms underpinning the ads.

What does that mean for Labor’s “path to victory” as political consultants, anoraks and journalist insiders often term it?

One internal view inverts a common criticism of Labor’s campaign: That it is not resonating in the suburbs.

“The closer you get to a CBD the less likely it is that you will bump into someone who has not long ago stopped listening to Scott Morrison,” the source said.

Liberal MPs’ challenges in the inner-city electorates of Goldstein, Kooyong, North Sydney and Wentworth are not part of Labor’s possible path to victory in this analysis but an important block to the government’s, given it cannot afford to spare a seat.

Labor says a view of the Prime Minister very much like the characterisation it is broadcasting through ads has become ingrained among voters in seats such as Brisbane, Chisholm, Reid, Boothby, Bennelong and Bass.

The party’s most optimistic strategists want to use these seats as a beachhead from which to launch their final push home.

Campaigners say the difference in voters’ perceptions is made plain in a tale of two electorates.

Labor’s candidate is tarred as a blow-in. And the Prime Minister has made no fewer than five visits to the seat in what supporters say is a show of strength.

Labor points to neighbouring Reid to support its theory about what kind of voters have settled views. Households earn an average of $300 a week more than their neighbours. Incumbent Fiona Martin faces a more than tall order to return to Parliament.

Internal Liberal divisions are a factor, campaigners concede. But for many steering Labor’s messages a global reordering of politics based on voters’ levels of education and cultural attitudes can much better explain why anti-Morrison messages become more potent only a little closer to the Harbour Bridge.

Where does that leave the party’s advertising campaign with less than a fortnight left?

The party believes the appeal of the Liberal message is now blunted in new parts of the electoral map where voters hold strong views of Mr Morrison.

But these changes only serve to cancel out Liberal gains and free Labor’s hand to focus on its critical push to secure majority government.

Labor’s television messages are euphemistically aimed at “the median voter”, or hugely disengaged people in seats such as western Sydney’s Lindsay, who have not been responsive on Mr Morrison’s character – or, campaigners say, anything else much besides.

The opposition hopes the final two weeks of the campaign will focus their minds on the question and is broadcasting a pitch honed especially for their ears.