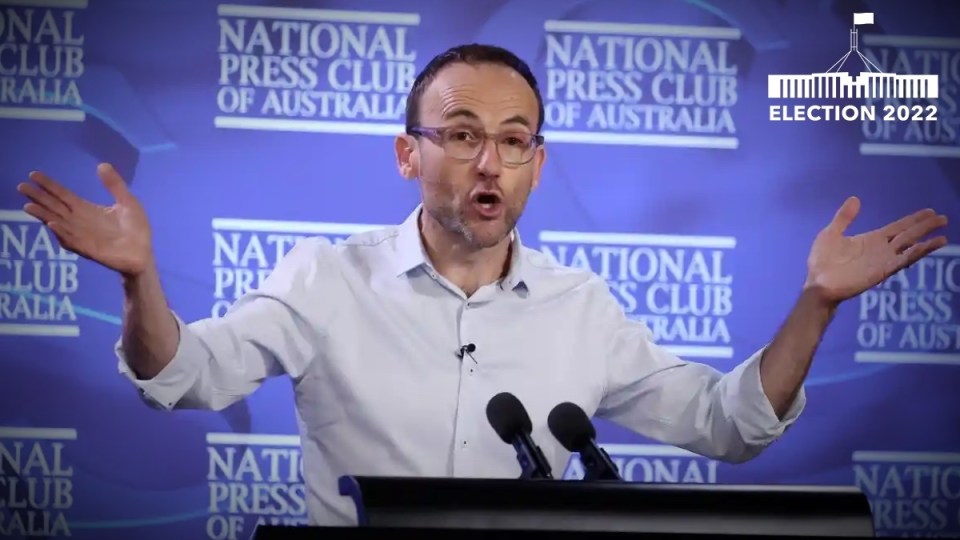 Greens leader Adam Bandt is struggling to be heard this election, when it is other challengers on the political left who the media variously finds more interesting, or more urgently in need of a background check.

Mr Bandt denied that the Greens and the bunch of climate-focused independents challenging inner-city Liberals are working at cross-purposes at the upcoming election.

“The more climate is in the news, the better,” he said on Wednesday during an address at the National Press Club.

That can depend on how you slice it. For the Greens, events like the Press Club pre-election address are a golden chance to address a national audience and one that only comes during a federal campaign.

With a few exceptions, Greens MPs are often forced to take the initiative and hound journalists themselves if they want to be quoted in stories about national politics.

After a once-in-a-political-cycle twinge of civic duty, editors and reporters will give the Greens a much greater airing in the weeks before a national election, sometimes even in the first 30 minutes of a TV news bulletin.

But with events this week such as Prime Minister Scott Morrison campaigning to save moderate Liberal Trent Zimmerman from another independent challenger, Kylea Tink, there will be less time for other coverage outside the major parties’ orbit.

The Greens are trying to shape pre-election perceptions by presenting Mr Bandt as a leader who stands alongside Mr Morrison and Labor leader Anthony Albanese on the national political stage and who could have a casting vote in a future hung parliament.

But on Wednesday it was Mr Bandt who distinguished himself from those other two MPs by delivering policy proposals at a rapid clip unlikely to be matched again for the duration of the current campaign.

His pitch, by and large, hit all the right notes. Stopping future exploration of fossil fuels in Australia; wiping out student debt; raising environmental concerns about the enriched nuclear material used in our incoming submarine fleet; more public housing; and, the centrepiece, making dental care part of Medicare.

The Australian newspaper soon had a response ready under the headline: “Greens leader Adam Bandt’s vision is a national nightmare.”

But unless questions about Australia’s modern defence capability have kept you up, none of the Greens policies pitched were really nightmarish. Even then Mr Bandt was representing a longstanding view among Australian environmentalists in the nuclear power debate.

The party was probably canny to not include plans to bring defence spending right down to 0.7 per cent of Gross National Income or renationalise the electricity system in the main highlights included in their televised address.

But the part of its dental care policy most widely picked up by reporters does seem like an addition made for the benefit of journalists or to energise the party faithful: the new scheme will be paid for by a 6 per cent wealth tax on Australia’s billionaires.

The dental care proposal costs about $8 billion a year, according to the Parliamentary Budget Office; finding money without a new tax on billionaires would not have been difficult

In fact the proposed scheme costs slightly less than the combined cuts to fuel and low-to-middle income taxes rolled out as temporary cost-of-living measures in the federal budget last month.

Greens ideas are often cast as radical but they suggest a wide range of influences from academia to law to history.

The Greens policy on housing affordability this election proposes reviving what was once policy orthodoxy in Australia: to build 1 million new social housing dwellings to address a housing shortage.

On income support they are proposing a universal increase in various benefits until they hit the poverty line, an interesting approach to a growing policy problem many won’t touch.

Whether the Greens contributions leave any real impact on government depends on who reads them. The party was the first to put  a proposal for a federal anti-corruption commission to parliament years before the Morrison government failed to meet its promise to create one.

On Wednesday Mr Bandt broke up a policy speech with some optimistic projections about the expected Greens vote at the coming election.

Compared to some of the sometimes-exuberant expectations set by his predecessors Mr Bandt’s pre-election forecast seems defeatist.

It’s not hard to see why. A Greens strategy first outlined more than a decade ago for building new strongholds by targeting inner-city Liberal seats is now over and, for now, forfeited to the independents.

New terrain and members would bring the party energy and purpose like the success of its move into northern NSW when campaigns against coal seam gas began resonating with audiences who had never voted Greens.

This raises some difficult questions about the Greens’ future but also about that of Australian political debate.

The Greens’ most important role as a party has been to expand perceptions of what is possible in Australian politics by introducing ideas and challenging consensus views.

It is not clear that a band of individuals, however impressive, could do as much.