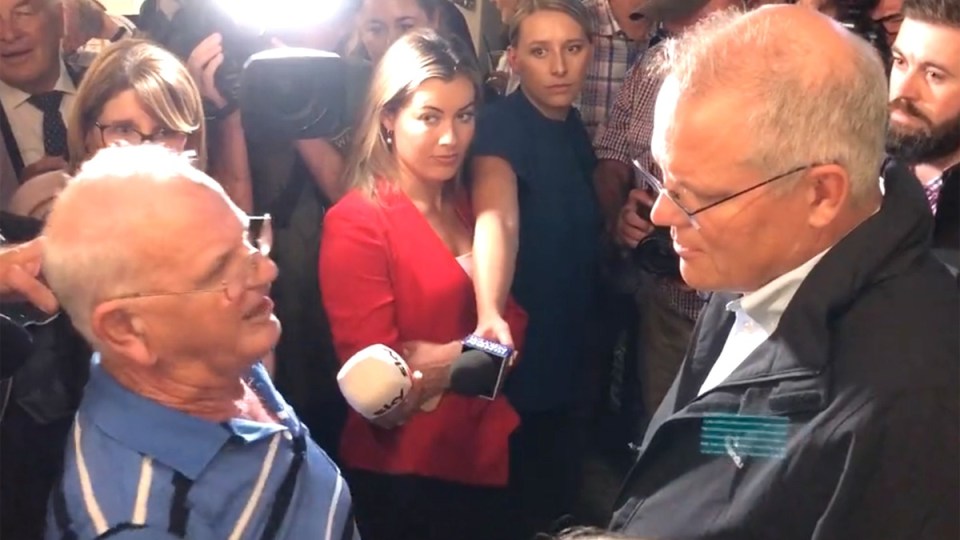 A chance encounter with a 73-year-old pub goer in the Hunter provided a rare moment of insight into voters’ regard for Prime Minister Scott Morrison.

Raymond Drury seized his moment to tell Scott Morrison that his standard of living had gone downhill under the current government.

New details about Mr Drury’s story and his dropping disability pension, despite his severe asbestos-related illnesses, show his complaints cannot be so easily sidelined.

But he might have been more vocal still had he known about Scott Morrison’s previously unreported role in an unsavoury affair while he ran the NSW Liberals.

Mr Morrison declined to respond on Friday when asked about taking more than $28,000 in donations from James Hardie, the company which killed thousands of Australians with asbestos building products and which continued to make political contributions even as it faced allegations of moving money beyond its victims’ reach.

Mr Morrison’s role in the episode is one of many lasting liabilities from his time as boss of the country’s largest Liberal division, where his intersection with sometimes brutal politics and a now-discredited fundraising arm has been little remarked upon.

The last donation by James Hardie to the NSW Liberals, of $10,000, was made in May 2004, months after the convening of a state parliament inquiry that would examine claims the company was cloaking its assets to frustrate victims from securing compensation.

Another $11,000 in donations from the company came not via the NSW Liberals directly but the Millennium Forum, a fundraising front organisation that would gain notoriety at a state corruption inquiry for being found to have disguised the source of illegal political donations at a state election. It was later disbanded.

The front for Liberal activities was established the year before Mr Morrison became the party’s NSW boss and registered under the party’s corporate structure, of which he was a director.

The fundraising forum’s long-serving executive director, Paul Nicolau, resigned as the Australian Hotels Association boss just before a corruption commission appearance. Mr Nicolau was handpicked as the Liberals’ fundraising chief by Mr Morrison. He did not respond to a texted query on Friday.

Other political organisations had received them too. The NSW parliament handed down a damning report alleging James Hardie had been seeking to frustrate victims financially since 2001, prompting calls for the government to act.

The ALP transferred a total of $77,500 in donations from James Hardie to asbestos-stricken employees when the company first began restructuring its wealth and, as part of that process, established an underfunded victims’ charity. In federal parliament Mark Latham challenged then-prime minister John Howard to do the same.

But Mr Howard eventually agreed after, he said, reading the inquiry report.

But how much was repaid? Mr Howard was vague on how the money would be returned and did not say by which branches.

Donations disclosures can be contradictory, especially when previously connected with the fundraising operation of the NSW Liberal Party or across state and federal entities or between donors and recipients.

But James Hardie said it gave the Liberals across the two branches close to $85,000, according to the company’s disclosures.

Mr Howard did not provide any detail on the amount he had promised to repay when he eventually acknowledged the outrage about money being diverted from a company reportedly denying victims compensation.

“I’d have to check that with the various sections of the party,” he said at the time.

One contemporaneous newspaper report says total amount in donations that the Liberals would actually repay was just $23,000.

None of the many amendments made to NSW Liberals donations disclosures well after Mr Howard’s commitment suggest the donations were returned to James Hardie around that time. But if the Liberals had paid the money to a charity instead of returning or cancelling the gift this would not be recorded on such forms.

In any case, Mr Morrison was not intent on clarifying how much, if any, of the money that had passed through the state organisation he controlled had been repaid.

Neither was comment offered on the role of the shadowy Millennium Forum in fielding the James Hardie contribution.

“The NSW Liberal party always acts in line with its obligations,” a spokesman told The New Daily.