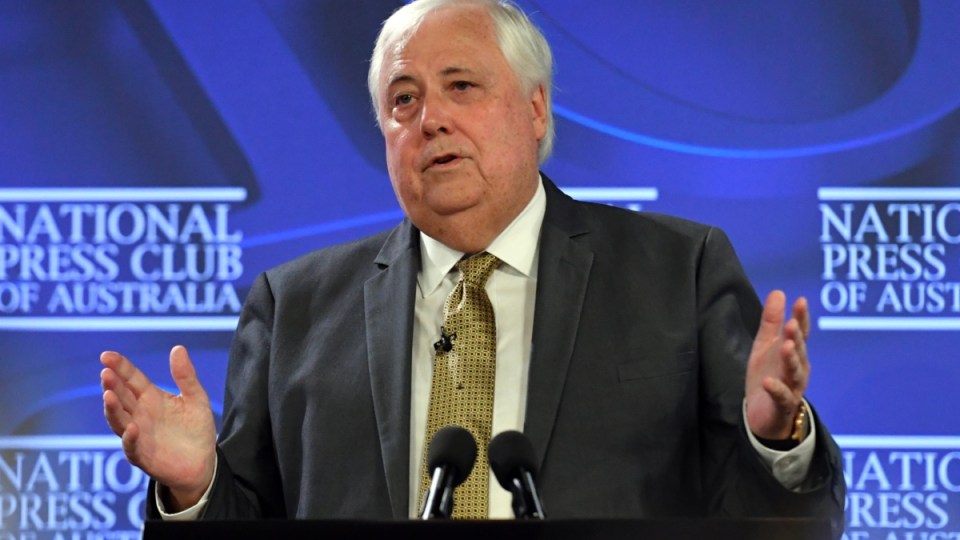 Clive Palmer said on Thursday his party would preference the major parties and the Greens last in the Senate. Photo: AAP

Billionaire demagogue Clive Palmer has unveiled key parts of his election platform, signalling a clear intent to spend big again but also broaden his party’s appeal to the political margins.

It was grounded in unorthodox projections of ruinously rising inflation and debt and a simple, albeit untested fix – capping interest rates at three per cent.

Mr Palmer had been due to address the club in February but pulled out of his appearance at the last minute, saying that he had caught COVID-19.

He said on Thursday that his life had been saved by a radical “trial” of drug-based treatments but his assertions on vaccinations were otherwise comparatively short.

Post-pandemic inflation has taken their place.

Mr Palmer claimed that a large proportion of Australians would soon be forced to sell their homes to foreign owners without his intervention.

“It’s not talked about by the Liberal Party or the Labor Party,” Mr Palmer said.

“Maybe they know that it’s coming and maybe they think they can’t do anything about it.”

The speech suggests the UAP is broadening its campaign and taking on conventionally populist economic narrative about Australia’s decline from the peak of the mining boom to being the “bottom of the food chain” in Asia.

But one tactic the party still intends on sticking with is outspending all its rivals. Mr Palmer quoted a budget of $70 million for political advertising through the entire campaign (UAP began advertising late last year and has spent a little less than half its war chest).

That is slightly below the $83 million that Mr Palmer’s iron ore company, Mineralogy, spent on the party’s entire campaign last election, which did not win any seats in Parliament but which Mr Palmer said had sunk Labor’s chances.

Graeme Orr, an expert in the law of politics, said that, nearly a decade since he first came to national politics, Mr Palmer appeared to still be finalising his newest political identity but that he could more than afford the time to think.

“The net effect is going to be corrosive,” Professor Orr said of the effect of such lopsided spending on equality and considered debate in Australian politics.

“The question is why didn’t the Liberal-National Parliament do something? Maybe they thought that on a net basis, he somehow would help them as he did by wrecking Bill Shorten?

“In any case, he has certainly stolen a march on One Nation; Bob Katter; the Liberal Democrats; the anti-vaxxers and Riccardo Bosi. He has made himself a lightning conductor for the freedom movement and he did it by starting in September when no one else could afford to.”

However, Professor Orr said, Mr Palmer began attracting public attention with a much more limited spend back in 2012 or even earlier.

“That was when Palmer was doing a kind of third-way thing: He stopped the deregulation of universities; he stopped cuts to the ABC; he said to Abbott’s budget: ‘Look sorry, I’m not going to let you’. Now it’s difficult to see consistency except for ego and business interests.”

Professor Greg Melleuish, a historian of politics from the University of Wollongong, said he thought the UAP’s new tack was a smart way for the party to broaden its appeal in a crowded political market for perhaps only two or three Senate seats.

“He’s worked out that the vaccination stuff is over,” he said.

“He’s moving the focus, as a lot of people are, away from the pandemic and back onto economics.

“The problem is that for voters, most of these issues are not going to bite until after the elections are over, especially with Morrison cutting the fuel excise and handing down the budget. So he has to rely on these terrible prognostications instead.”

Returning to his theme about the national debt, Mr Palmer told a journalist he would “personally” favour voting for the Greens before Liberal or Labor because they had not had a hand in the federal budget.

The comment led to widespread reporting that the UAP was preparing to direct its preferences – about two-thirds of which flowed to the Coalition at the last election – to the left side of politics.

But it was not clear that these remarks meant any change to the principles of UAP preference allocation that party leader Craig Kelly MP outlined earlier this year – to suggest only that voters leave major parties last except for rebel anti-vaccination MPs.

Given the political makeup of the seats in which the UAP vote might determine the outcome, it appears even less likely to have influence.

Mr Kelly did not immediately return calls on Thursday evening.

Clive Palmer reveals a political pivot – and his advertising budget