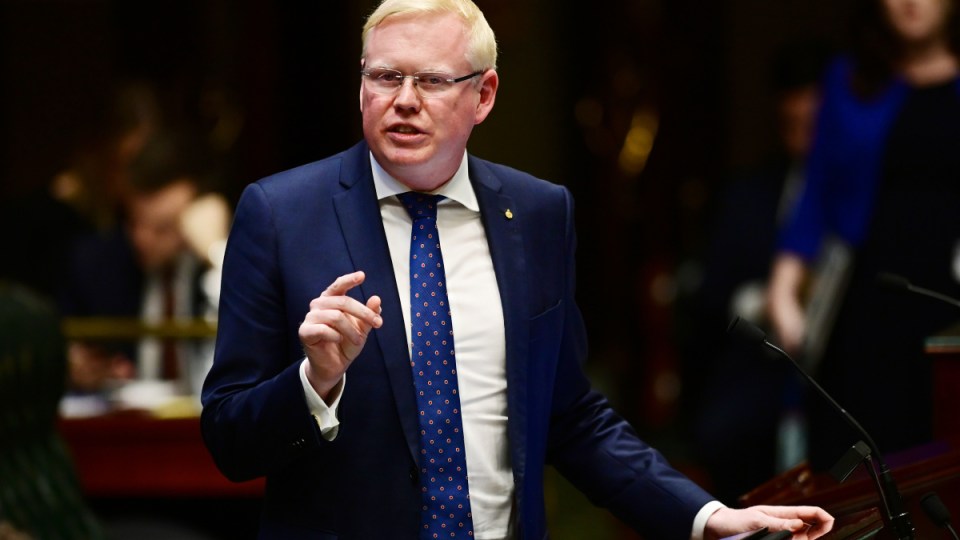 Former Liberal MP Gareth Ward has been suspended from the NSW parliament after he was charged with the sexual assault of a teenage boy and a man.

Acting Premier Paul Toole on Thursday moved the motion to suspend the Kiama MP from parliament until the outcome of criminal proceedings.

The motion received bipartisan support in parliament and was passed despite criticism from the Labor opposition.

Earlier on Thursday, Mr Toole said the government had been waiting on legal advice over suspending Mr Ward without pay, but would move ahead with a motion to suspend him.

“The actions we’ve taken this week as a government have been decisive,” he told reporters.

“We will continue to take … action on his salary, his remuneration and his entitlements.

“These sexual charges that have been made are quite serious.

“This is also about protecting those victims so they can have their day in court as well.”

Mr Ward, who has repeatedly denied the allegations, said he’d been suspended “based on allegations that I completely deny and that have yet to be tested in a court of law”.

“I am extremely disappointed with that decision,” he said in a statement on Thursday.

“The effect of the decision is that I am unable to speak and vote in parliament.

“I will, however, continue to represent and lobby for my local community as its democratically elected member of parliament.

“As challenging a time as this is for me personally, I have an important job to do and I intend to get on with it.”

However, the government instead moved to suspend him after receiving legal advice his expulsion could jeopardise any trial.

Labor MP Ron Hoenig accused Mr Perrottet of failing to “protect the integrity” of the parliament by calling for Mr Ward’s removal.

“I was gobsmacked by the premier’s approach,” he said.

He accused the government of having “absolutely no idea of what you’re doing”.

“You have failed it miserably.”

Mr Minns said when the premier announced the Kiama MP would be removed from parliament “it would be reasonable for most people to assume … that that motion could have gone ahead”.

“It seems clear now that that is not the case.”

Labor is seeking independent legal advice regarding other routes to have Mr Ward’s pay suspended, or to have him expelled from the parliament, including through a referral to the privileges committee.

National Sorry Day is a day to commemorate those taken. But ‘sorry’ is not enough – we need action
Putin ally warns of nuclear dystopia
Today's Stories