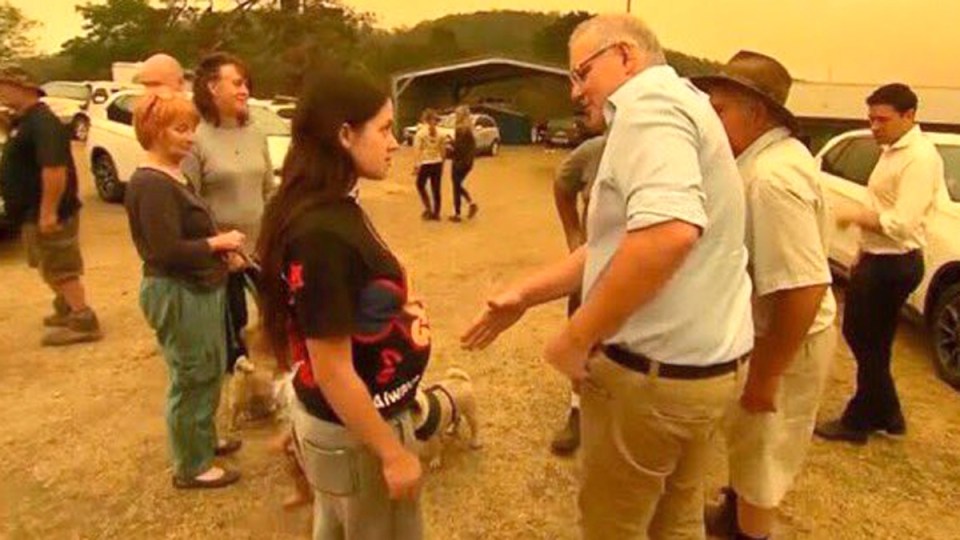 Mr Morrison was famously confronted by angry locals in the days after bushfires destroyed the NSW town of Cobargo.
analysis

Prime Minister Scott Morrison’s visit to bushfire-affected towns in January 2020 may have been embedded in his memory when he visited flood-stricken northern New South Wales on Wednesday.

To say the Prime Minister was met with a mixed response in the aftermath of the Black Summer bushfires is to put it mildly, and the news footage of his encounters with devastated locals provided some of the defining images of his time in office.

There were no such media opportunities on Wednesday, with media banned from covering parts of the Prime Minister’s trip.

Journalists were only told of a visit to a farm and a State Emergency Services operations centre after it had concluded.

“In disasters like this not everybody wants a camera shoved in their face,” Mr Morrison said.

It is not known with whom the Prime Minister met, or if they had been chosen or pre-screened by his office.

But in seeking to limit coverage of his meetings with locals, the Prime Minister’s handlers only served to revive memories of his deeply unusual hand-grabbing in Cobargo, including an episode caught on camera of a furious firefighter who refused to shake his hand.

Just returned from a Hawaiian holiday, taken during the worst NSW bushfire season in living memory, the Prime Minister bore the brunt of blunt feedback from locals including: “You’re an idiot”; “P— off”; “You’re not welcome”.

Even bearing, as he was on Wednesday, promises of extra disaster payments and relief funding, Mr Morrison would almost certainly have received a similarly frosty reception in Lismore.

Nationals leader Barnaby Joyce, a politician much more at ease around others than Mr Morrison, said he would have been “incredibly surprised” if the city had made the Prime Minister feel welcome.

After all, even though the government was offering money for rebuilding, it does not have an exemplary track record of getting it out the door.

Businesses owners in the path of the floods on Wednesday said they had not heard back after applying for federal grants and, besides which, had none of the utilities necessary for opening shops again anyway.

Mr Morrison declared the flood a “national emergency”, a step reporters were told was necessary because it would cut red tape and enable a faster disaster response.

But it had been more than a week since the catastrophe was first visited on Lismore.

When Mr Morrison did front up to reporters and the potential for unexpected questions, he was two hours late.

Why had residents been forced to wait so long before government help arrived, he was asked.

“There can never be enough support,” Mr Morrison replied.

Initial reactions to the Lismore trip focused on the strangeness of an official visit being closed to the cameras.

In Lismore, four people have died and thousands have been left homeless after the worst flooding in the city’s history.

Locals have been vocal critics of the government response, both state and federal.

Angry Lismore residents turned out to confront Mr Morrison, but they were denied a chance to vent their fury face to face.

Carrying signs and chanting “the water is rising, no more compromising” and “It’s raining. It’s pouring. The PM is snoring”, a crowd of at least 100 locals awaited Mr Morrison’s expected arrival at the town’s emergency operations centre early on Wednesday afternoon.

About 40 police were also on site at the Lismore City Council chambers in Goonellabah.

Mr Morrison did not attend either gathering.