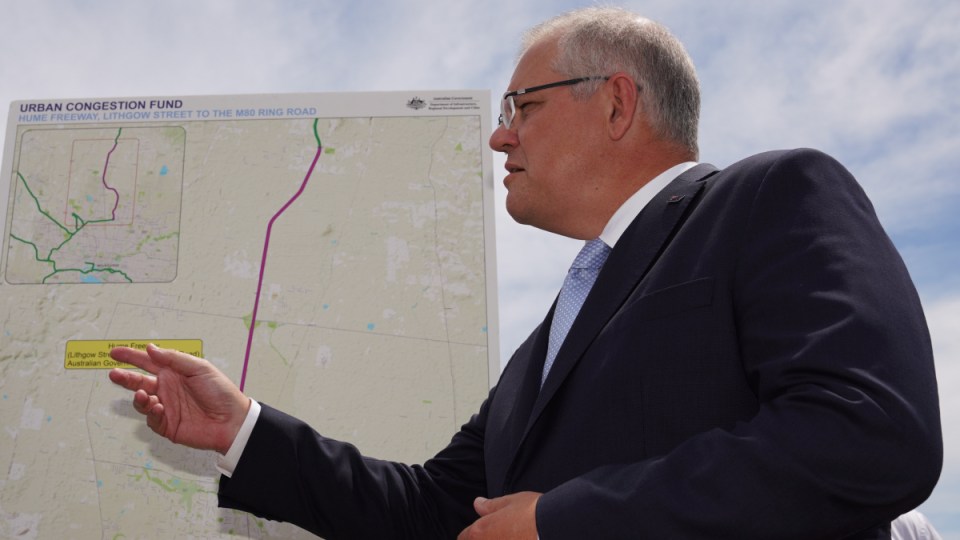 The Prime Minister at the launch of the car park fund, prior to the last election. Photo: AAP

The government has now dumped more than $100 million worth of car parks planned under a national scheme already marred by allegations of mismanagement, as voters turn their backs on them.

One of the Morrison government’s signature campaign promises at the last election was a massive investment in car parks in urban areas, as part of a scheme aimed at taking cars – and traffic – off key city roads.

But the $650 million commuter car park fund has been under a cloud following a report by the national audit office.

Commonwealth auditors found the scheme was poorly planned, administered without consultation and heavily geared toward marginal Coalition seats in Melbourne. (The car park scheme is just part of a broader $4.8 billion urban congestion fund, which also appears to have been struck by cancellations.)

On Thursday, Treasurer Josh Frydenberg, who represents the formerly blue ribbon but increasingly contested Melbourne seat of Kooyong, was forced to announce the government would scrap a plan to build three car parks in the electorate.

The three had a budget of $50 million (a fourth, which would have added $15 million to the total electorate bill, had already been dumped).

The Treasurer’s announcement coincided with news the local Boroondara Council would be bringing forward its consultations on the car parks, which are the subject of considerable community backlash.

One particularly controversial car park, in Camberwell, would have delivered just 90 parking spaces for a draft budget of some $20 million, according to council planning documents.

Multi-storey projects at Canterbury and Glenferrie have also been scrapped, as has one at Surrey Hills which the government says could no longer proceed because of a train station merger.

“I [have] also met with a number of local residents and traders and listened to the issues they have raised,” Mr Frydenberg said in a statement announcing the scrapping of the plans.

“Further to these conversations and discussions with council, the federal government has decided not to proceed with funding for the proposed car parks.

“The local feedback through the consultation process has been constructive.”

But the government is not saying exactly how many of the outstanding car parks or broader congestion fund projects have had to be scrapped.

Mr Frydenberg said that some 70 per cent of car parks were either under construction or would be within one year.

Car parks with initial budgets of about $50 million have already been cancelled at Brighton Beach, Balaclava, Mitcham, Kananook and Seaford.

A planned $70 million extension at Thompsons Road has also been junked and a separate crossing removal plan in Adelaide’s Brighton Hove have also been scratched.

Some 47 car parks were to be built under the scheme under initial estimates: More than three-quarters of those were in Coalition seats, in a process, the auditor said, that involved the government making its own decisions on sites and with zero input from independent bureaucrats.

Prime Minister Scott Morrison has declined to answer questions about his office’s involvement in the selection of electorates to receive car park funding.

He dodged questions about whether his office requested or saw a list of the 20 most marginal electorates in the country and if this was used to determine funding decisions.

Of those initially scheduled, and not accounting for recent cancellations, six were in the seat of Goldstein (held by Liberal Tim Wilson), five in Deakin (Assistant Treasurer Michael Sukkar) and four in Banks (Mental Health Minister David Coleman).

Neither Mr Wilson nor Mr Coleman responded to queries from The New Daily on Thursday about how many car parks in their electorates were still going ahead and if members of their electorate were happy with the plans.

A spokeswoman for Bayside City Council said they were continuing talks with the Victorian and federal governments about proposals to build new parking at Brighton North and Sandringham.

The audit report found that local residents did not factor into the government’s decision making, perhaps foreshadowing the future blowback that has forced it to distance itself from a program key to its re-election.

“There are also indications in the records that there had been no engagement at any level with some councils prior to a project in their local government area being announced,” the auditor found.

Meanwhile, state planning agencies were also not consulted about the projects.

When asked how many of the government’s planned projects under the $4.8 billion congestion fund have had to have been scrapped, Infrastructure Minister Paul Fletcher would not provide exact figures.

But he did say only 80 per cent of the fund’s planned projects would be under construction by year’s end.

“We are delivering 185 packages of work nationwide,” the Minister said.

“We are making good progress on these projects, with 85 now completed or under way nationwide, and a further 65 are expected to start construction this year.

“It is not surprising that in a national program of this scale some projects will be varied or removed, and others will be added.”

Mr Fletcher said car parks had been added at Sunbury and Watergardens, while replacement works would be undertaken at Brighton Hove in Adelaide.