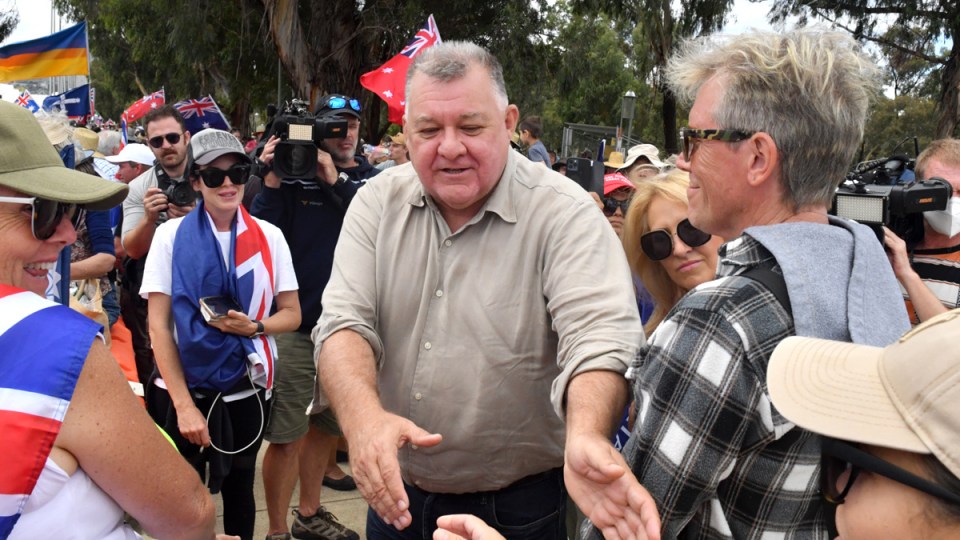 Craig Kelly pictured earlier in the week at anti-vaccination mandate protest outside parliament.

The Morrison government is fighting a losing battle to win crossbench support and shepherd its signature religious discrimination legislation through parliament.

Liberal sources had initially predicted the Religious Discrimination Bill would be introduced to parliament as early as Wednesday morning, after the majority of the party room agreed to compromise on the proposal following lengthy negotiations.

The troubled bill, introduced personally into parliament by Prime Minister Scott Morrison last year, would provide a guarantee that religious organisations, including schools, would be free from discrimination for expressing religious beliefs and activities.

But after key independents rebuffed an approach on Tuesday night on what they said was “rushed” legislation, Mr Morrison was forced to seek support from former Liberal and controversial anti-vaccine MP Craig Kelly.

“I want to put an amendment that there should be an exemption [from employers requiring workers be vaccinated against COVID] so that people can’t be forced to be injected with a substance against their will,” Mr Kelly told The New Daily.

“He will consider that”.

Mr Kelly said the Prime Minister’s office had agreed to review a draft of his proposed changes to the bill, which he said were being written by the Office of Parliamentary Counsel.

He said he intended to introduce the changes as a proposed third reading amendment to the bill on Wednesday afternoon.

“They can’t say yes or no until they have a proposal in front of them,” the MP said.

Comment has been sought from Mr Morrison’s office about whether it would expressly rule out supporting such changes.

Canvassing support from Mr Kelly, who left the Liberals last year because he felt the party did not share his staunch anti-vaccination mandate views, came as Labor signalled its intention to propose its own amendments to the law.

Labor’s shadow cabinet issued a firm proposal to move substantial amendments to the bill in the lower and upper house, including offering express protection to students on the basis of gender identity.

The government on Tuesday changed the draft law to expressly prevent students facing discrimination on the basis of their sexual preferences. But protection was not extended to transgender students – an absence that inspired significant opposition within the Liberal Party and led to protracted internal negotiations and an uneasy consensus to back the bill.

Labor will also move to alter a clause that would offer protection to expressions or actions motivated by sincerely held religious convictions, so long as they were not made with malice or the intention to vilify or harass others. The opposition’s changes will ensure this clause is never allowed to override state-based anti-discrimination law.

“The sometimes toxic debate that has been unleashed by the Prime Minister has put a spotlight on the fact that no rights are unlimited,” Labor shadow assistant treasurer Stephen Jones said on Tuesday while issuing a plea for parliament to not pass the bill in haste.

Mr Jones used his own powerful speech on the issue to remember his nephew, Ollie, who took his own life.

“He was a beautiful, creative, courageous young man.

“He was gay, he was uncertain about his gender … but now he’s gone and we’re no longer going to be able to love and support him on his journey through life.”

Crossbench MPs have revealed they met Mr Morrison on Tuesday night to discuss their position.

She said she would not support the bill in its current form due to concerns about the controversial clause protecting sincerely held beliefs and its potential to override state legislation.

The South Australian MP said Mr Morrison told her he was keen to get the legislation passed this week, but she felt it had been “very rushed”.

“Hopefully [our conversation] will lead to some further amendments that would make the bill more supported across the parliament.”

Independent MP Helen Haines told the ABC Mr Morrison also met her last night to secure her support to pass the religious discrimination laws, but she made it clear that she would not vote with the government.