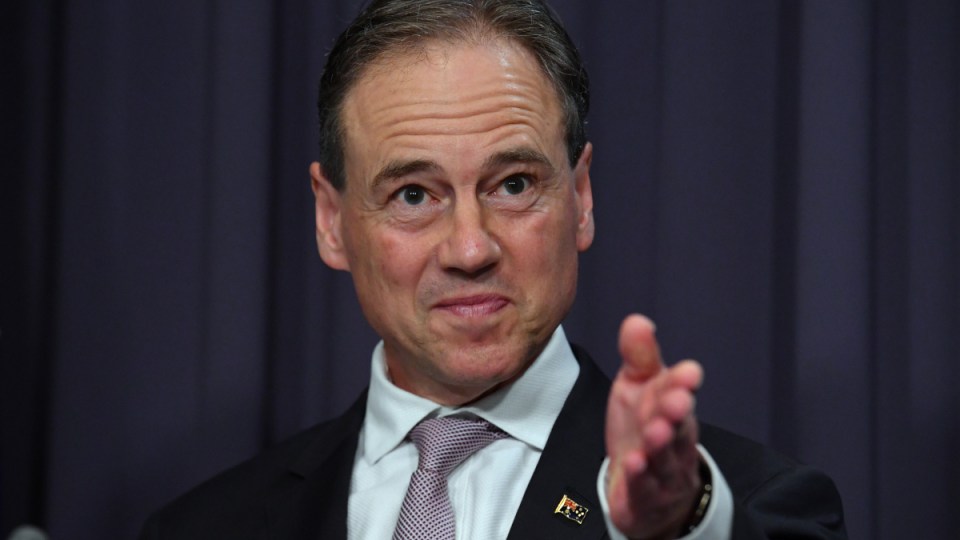 The Coalition won’t follow America’s lead in giving out free rapid COVID tests to all citizens, with Health Minister Greg Hunt defending the government’s approach and blaming test shortages on “a global challenge”.

Federal Labor again blasted the government for not ordering more rapid tests sooner, claiming it was “impossible” for some Australians to even find one.

The British government has provided free rapid tests through pharmacies and online ordering systems for months.

On Friday, the American government announced it would provide one billion free rapid tests to citizens, with 500 million tests available this week from government websites and mailed directly to homes.

Labor has called on the government to make rapid tests free for all Australians, with supply shortages leading to the items selling out in many parts of the country, and high demand seeing a single test priced at upwards of $30.

However, the federal government and national cabinet have only agreed to provide a limited number of free rapid tests through pharmacies for concession card holders, stopping short of free access for all.

The federal government is also providing free rapid tests to the aged-care system and higher-risk populations including Indigenous communities.

Speaking at a press conference on Sunday, Mr Hunt said he had “respect” for the American approach, but defended his government’s decisions.

“The Australian system, through the Commonwealth and the states, have purchased over 200 million tests, and they’re available through a variety of options,” he said.

Mr Hunt said the Commonwealth had given 5.6 million tests to aged-care homes so far, while also supplying some tests to state governments and extending free access to 6.6 million concession card holders from January 24.

“I think that US system, as I say, is about one and a half tests per capita per head of population,” he said.

“The Australian purchases at this stage are over eight per head of population, and that’s the distribution system that has been agreed with the states and territories.”

The American scheme provides for four free tests per household.

The British scheme for free tests will reportedly end in coming weeks, after costing upwards of $11.3 billion.

The federal government has ordered 80 million rapid tests for aged-care and Indigenous communities.

State governments have ordered and secured many more on their own, with New South Wales planning to secure 100 million, Victoria 44 million, and Queensland 18 million.

The Opposition has criticised the federal government for failing to improve access to rapid tests after national cabinet agreed to allow close contacts to return to work if they returned a negative rapid test result.

“Scott Morrison simply must do better. He has to fix the mess he’s created around rapid tests,” Mr Butler said on Sunday.

“He simply should have listened to the warnings back in September and ordered enough tests for us to get through this fourth wave.

“Instead, Australians are finding it almost impossible to get their hands on a rapid test. When they do so, they are paying as much as $100 for a test that their government should be providing them for free.”

Coalition ministers have claimed Labor’s approach would encourage people to hoard rapid tests, an argument the Opposition has rubbished.

Also on Sunday, Victorian Premier Daniel Andrews announced his state had received the first delivery of three million rapid tests from its order of 44 million.

The tests will be distributed to “key workforces” such as emergency health care and the disability and aged-care sectors, following recent national cabinet changes allowing close contacts of COVID cases to return to work after a negative test result.

People with pre-existing medical conditions will also get access to the tests.

“This crisis could have been avoided if the Morrison government had supplied free rapid antigen tests to workers in crucial services,” tweeted Labor senator Tony Sheldon, the former national secretary of the Transport Workers Union.

In October, after rapid tests were approved by health regulators and shortly before they went on sale, The New Daily asked Mr Hunt whether the government would provide rapid tests free to Australians.

He responded that the government wanted to “let that market develop”, indicating that the Coalition was only planning on providing rapid tests free for those with “critical needs”, like people in the aged-care system.

On Sunday, Mr Hunt was asked about those comments, claiming the market was responding to the demand.

We’ve been in the market since August and we’ve been able to provide that continuous supply to aged care.

“The states have more recently entered the market, and they’ve indicated that there are significant purchases that they’ve made and we are beginning to see now already more supplies coming into the pharmacies and the supermarkets. So that’s been a global challenge.”