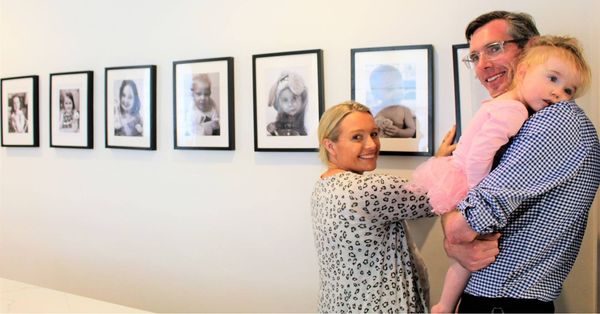 Dominic Perrottet and wife Helen and their wall of baby photos. Photo: Facebook

NSW Premier Dominic Perrottet has announced that he and his wife Helen are expecting their seventh child.

The conservative Catholic already has five daughters and one son.

“Our family photo wall is going to need another frame! Helen and I are thrilled to announce we have a little girl due next year.

“With five sisters already, William is looking on the bright side — more bench depth on the family basketball team.”

Mr Perrottet was appointed premier on October 5 after Gladys Berejiklian stood down to face a corruption inquiry.

The ICAC inquiry is set to begin testing the allegations against her, with another former premier and a current government minister among the first to give evidence.

ICAC is investigating whether Ms Berejiklian “exercised public functions” in a position of conflict given her secret five-year relationship with disgraced former MP Daryl Maguire, which she admitted during hearings into his conduct in October last year.

It will probe whether she broke the law by failing to disclose her relationship with the former member for Wagga Wagga and whether she “was liable to allow or encourage” his conduct.

Ms Berejiklian’s role in grant funding awarded to two projects in his electorate in 2018 will also be investigated.

The Stats Guy: What does tourism in Australia look like now that travellers are returning?
Nationals ‘highly unlikely’ to agree to 2030 target
Today's Stories